Brad Ruoho, working in his Legacy Toys store in the Mall of America in June, received one of several million Paycheck Protection Program loans. Congress has extended the PPP program so businesses can apply until Aug. 8.
Photographer: Kerem Yucel/AFP via Getty Images)

Congress’ last-minute extension of a pandemic relief loan program to August is unlikely to increase banks’ appetite to lend the remaining money.

Lawmakers extended the popular but embattled Paycheck Protection Program, which expired June 30, before leaving for a two-week July recess. But interest in the program had already waned after an explosion of interest in March when Congress first approved $349 billion in emergency lending (Public Law 116-136). The program, which offers loan forgiveness if funds are used for specific purposes, is meant to bolster businesses struggling in the pandemic-induced recession.

The extension to Aug. 8 is aimed at businesses that were unable to get PPP loans amid the early frenzy. But analysts said it is unlikely to spur more lending because of revised terms that make it unattractive for banks to use. A second iteration (Public Law 116-142) of the program changed the loan maturity period to five years at 1% interest, up from two years.

“Some small banks will be involved in it, but it’ll just continue to be at a much slower pace than you saw originally,” Keefe, Bruyette & Woods bank analyst Catherine Mealor said.

The original terms of the loans were already unattractive for banks to make much income, but it was widely seen as an opportunity to retain business clients and show they were trying to provide support during the crisis.

Congress’ extension surprised many banks, which had told their clients the window would be closing. The Consumer Bankers Association, which represents the U.S.'s biggest banks with retail banking arms, released a statement on June 30 touting the program’s success.

The group’s President and CEO Richard Hunt told Bloomberg Tax on Tuesday the last-minute extension “came as a surprise” but that the bigger banks would continue to tap the PPP money still left.

“The banks are going to move heaven and earth—as they already have—to do whatever they can to help small businesses succeed,” Hunt said. “If Congress wishes to expand to extend the program, that’s great,” Hunt said.

While the fees from the loans yield some income for the banks, the new loan terms amount to very little reward for a lot of work, Mealor said. But banks wanted to serve their customers as much as possible, despite the low incentives, she said.

“One of our banks described this PPP process as ‘building a plane as you’re flying it,’” Mealor. “It’s just been a little bit of a learning process here,” she said.

Lawmakers have repeatedly touted the program’s success providing funds to cash-strapped companies during pandemic. The bill to extend the program overwhelmingly passed both chambers and was signed by President Donald Trump just days later.

“The Paycheck Protection Program provided a critical lifeline to more than 4.8 million small businesses,” Sen. Marco Rubio (R-Fla.) said in a statement. “As the scope of the financial damage done to small businesses by the pandemic and resulting lockdowns has grown, it has become clear that longer-term support is necessary.”

Paul Merski, group executive vice president of congressional relations at the Independent Community Bankers of America, whose members are small and mid-sized banks, said lawmakers wanted to go home for the two-week July recess and be able to tell constituents that there is still $131 billion left in the program.

“They want to say that they have something out there for small businesses, you can’t just let the program end,” Merski said. 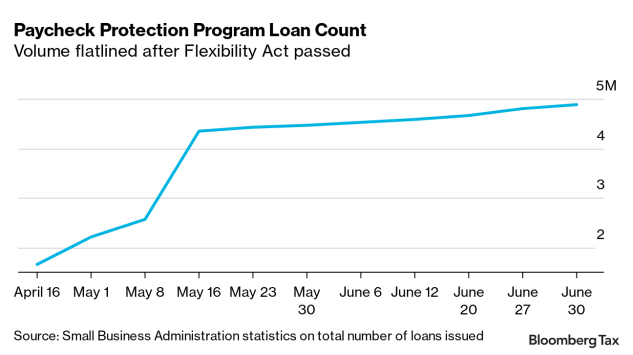 Raymond James financial regulations analyst Ed Mills said banks will keep the PPP pipeline open to businesses that stayed on the sidelines early on so those that faced permanent closures had greater access to funds.

“There was a sense of camaraderie among certain small businesses that needed it, but weren’t as desperate as someone else,” Mills said. “Now that there are funds, still available, they’re willing to access that funding.”

Mills also said smaller lenders that service un-banked or under-banked clients, or people who don’t have access to traditional banks, are more likely to accept the extension.

Community development financing institutions, which target that population for financial services, felt largely frozen out of the PPP process early in the program. Those institutions are likely to tap the extension to serve their clients, Mills said.

The ICBA’s Merski said the program needs a dramatic redesign to increase interest among banks and borrowers.

The PPP should be simplified for borrowers with an easier forgiveness process and a one-page affidavit to help businesses understand the terms of the loan, Merski said. “The only thing that’s going to make the PPP program viable going forward is a dramatic simplification,” he said.

And for banks, a minimum loan size and better terms would go a long way to “resurrect” interest, Merski said.

CBA’s Hunt said a proposal by Sens. Kevin Cramer (R-N.D.) and Bob Menendez (D-N.J.) to automatically apply forgiveness for loans $150,000 and below would significantly simplify the program.

“We need to have a system in place that’s easy for the customer, the small business person, easy for the bank, and can be handled” by the Small Business Administration, Hunt said. “Anything that disrupts that apple cart would not be conducive to lending. Congress needs to stop changing the rules and let the system work,” he said.