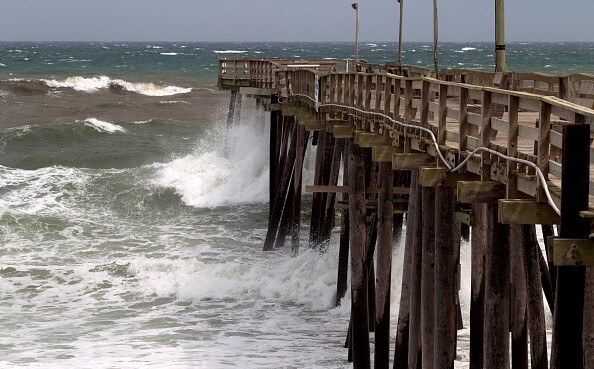 Waves crash along the Rodanthe Pier as Hurricane Dorian make its way to Cape Hatteras, N.C., on Sept. 5.
By Jose Luis Magana/AFP/Getty Images

The intensity of Hurricane Dorian has brought devastation to many communities, prompting employers to consider helping employees deal with the aftermath.

But until an area is declared a federal major disaster by President Donald Trump, employers there cannot offer tax-free assistance payments to workers.

The Internal Revenue Service generally makes announcements on deadline extensions and aid requirements on its website, https://www.irs.gov/, an agency spokeswoman said Sept. 5. A special page was set up for information on Hurricane Dorian. Employers were encouraged to check the page for updates, she said.

A request for a declaration by the president that a major disaster exists is made by the governor of an affected state after a damage assessment has been made, the Federal Emergency Management Agency said in a document on the disaster declaration process. Included with the states are the District of Columbia, Puerto Rico, the Virgin Islands, Guam, American Samoa, and the Northern Mariana Islands.

Emergency declaration and major disaster declaration are designations under the Robert T. Stafford Disaster Relief and Emergency Assistance Act. Although both types authorize the president to provide supplemental federal disaster assistance, there are differences.

Emergency declaration. This declaration supplements state and local government efforts in providing emergency services, such as the protection of lives, property, public health, and safety, or to lessen or avert the threat of a catastrophe in any part of the U.S., FEMA said. The total amount of assistance provided for in a single emergency may not exceed $5 million.

A request for an emergency declaration can be made by a governor in anticipation of pending destruction from an oncoming disaster. Those requests must show that emergency measures are needed beforehand and identify what steps should be taken.

As with emergency declarations, a request must be made by the governor of an affected state after making a damage assessment. However, the request must based on a finding that the situation is beyond the capabilities of the state and that supplemental federal assistance is necessary.

As of Sept. 5, President Trump has not yet declared a major disaster in any of the above-mentioned federal emergency declaration areas.

Additionally, FEMA disaster-aid programs can include public and individual assistance.

Disaster-relief payment programs provide tax-free reimbursement to employees significantly affected by a federally declared disaster, under Internal Revenue Code Section 139 and Revenue Ruling 2003-12. Such assistance must come under an employer program to provide aid to employees and the amounts paid, which are not included as earned income, may be used to offset storm-related medical, temporary housing, and transportation expenses that are not covered by insurance plans or other outside assistance. The payments also may be used to pay for home repairs to replace some household items.

Under Section 139, a federally declared disaster, such as a hurricane, flooding, tornado, or wild fire, would be considered a qualified disaster and include the affected area designated by the president. Similarly, a terrorist attack or military action also could precipitate the designation.

Once a disaster area is defined, attention turns to the employer-provided payments to employees because of the catastrophe. Under Section 139, those payments are not to be included as employee income or covered by insurance.

A qualified disaster payment means any amount paid to an employee, including:

-- reasonable and necessary personal, family, living, or funeral expenses; and

-- expenses for the repair or rehabilitation of a personal residence, or repair or replacement of its contents.

Natural disasters also should serve as a reminder to employers to establish and review contingency plans for the continued operation of payroll processing. For example, the hurricane season is from June 1 to Nov. 30. Floods, tornadoes, wild fires, and power disruptions are possible throughout the year, as are terrorist attacks and other man-made disasters.

But whatever form a disaster takes, employers are responsible for complying with the Fair Labor Standards Act, which required that employees be paid properly and for employers to maintain payroll records, especially those for wage and hour.

FLSA minimum wage and overtime requirements “are not subject to waiver during natural disasters and recovery efforts,” the Labor Department said in July (Fact Sheet No. 72: “Employment and Wages Under Federal Law During Natural Disasters and Recovery.”)

However, FLSA Regulation 541.602(b) regarding salary basis includes an exception: An employer that remains open for business during a weather emergency can deduct a full-day’s absence from the salary of an exempt employee who does not report for the day because of the adverse conditions. In doing so, the employer does not violate the salary-basis rule or affect the employee’s exempt status. A salary deduction for less than a full-day’s absence is not allowed.

To ensure that payroll functions as well as possible, especially wage payments, continue during a disaster, employers should develop a disaster-recovery and business-continuity plan. All aspects of the payroll process should be identified, along with all departments affected by payroll as well as vendors and services, which should be part of the plan.

Employers should develop strategies for protecting data, information storage, communications with employees, and policies related to leave requests and absences.

Generally, basic employment and earnings records that support employee work hours and additions or deductions from wages, and the basis for determining wages, is held for two years. Information such as name, address, birth date, sex, job, workweek, rate of pay, workday and workweek hours, agreements, and certificates is held for three years.

A disaster can destroy or damage electronic or computerized timekeeping systems and records, but some evidence of workers’ hours is required.

The systems and records need not be electronic. Time can be tracked using handwritten sheets. The FLSA says records can be kept in any particular form. They only need to be accurate, complete, comprehensible, and kept safe and accessible.