The federal gas tax, which sits at 18.4 cents per gallon, has remained the same since its inception in 1993, when the average price for a gallon was just a shade over $1. I’ve mentioned before that the gas tax needs to be significantly higher, but we’re not here to get you revved up about that again.

The idea of a tax holiday during either widespread or sector-specific market disruptions makes sense at first blush. The government—state or federal, depending on the tax at hand—can simply wave its hand and knock some percentage off the price of a good or service over a given period of time. Much like building the entire plane out of the black box material, it really makes one wonder why the tax doesn’t get permanently cut. When is paying more for something a good thing?

That facetious conclusion implies one of the (many) ways in which a tax holiday is bad policy: It decouples the cost of the tax paid from the value society receives and suggests that the tax is unnecessary. They’re also bad policy because, well, they don’t really work.

Tax holidays are largely ineffective at shuffling money around because tax just doesn’t comprise a significant amount of costs. Take the aforementioned gas tax of 18.4 cents per gallon. On about a $5 per gallon average cost per gallon of gas, that comes to about 3.7%. State sales tax on average is a bit more, hovering around 5.1%.

The cost of gas plummeting 18.4 cents per gallon isn’t exactly a windfall for most drivers, and it also isn’t guaranteed to happen. Gas prices aren’t broken down in the minds of drivers along taxes and fees; the cost on the big red sign is just the cost per gallon, inclusive of everything.

If on Monday, the cost per gallon is $5 and a federal gas tax holiday takes effect, there is relatively little pressure on gas stations to immediately drop prices on Tuesday. Indeed, the gas being pumped from their tanks on Tuesday is still the gas they paid the tax on when they purchased it from their supplier. Eventually, they’re pumping gas that reflects the reduced cost, or maybe the supplier hikes up their prices by the same amount. After all, everyone from gas station owners down to consumers were willing to spend $5 per gallon on Monday; maybe they’re willing to continue paying it.

With taxes paid at other points in the production chain, and not at the final sale to the consumer as in sales tax at a retail establishment, there is simply nothing to compel the federal tax holiday being passed along to consumers outside of good will. The oil and gas industry’s cup of good will does not runneth over. 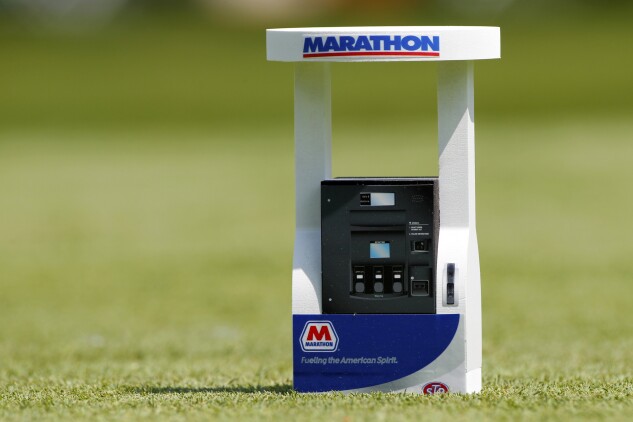 A view of a Marathon gas pump tee marker on the 17th hole during round one of the Marathon Classic presented by Owens Corning & O-I at Highland Meadows Golf Club on July 18, 2013, in Sylvania, Ohio.
Photographer: Hunter Martin/Getty Images

Even If It Is Effective

Retail sales tax is a bit more effective in this regard, as it is typically delineated on a receipt, and an eagle-eyed consumer would notice if they still paid the sales tax. However, in a time when supply chains continue to be strained, the higher demand could easily increase the price of goods at a rate comparable or even exceeding the sales tax savings.

In other words, if everyone rushes to the store to buy televisions or back-to-school supplies at the same time on the sales tax holiday, they might find the price of those goods that are in stock are higher than they anticipated. In that case, the tax effectively is still being paid by the consumer but it is simply being paid to the merchant in the form of the increased cost. Merchants, or their suppliers, are seeing increased profits subsidized by the taxpayers.

If everything above is wrong, and a tax holiday works and the savings are huge, what is the best-case scenario given the current supply chain crunch? Basically, shortages on items like back-to-school supplies, as well as state budget shortfalls in exchange for limited stock being sold at a small discount to the folks lucky enough to be at the front of the crush.

And on the subject of school supplies, are parents or guardians purchasing a year’s worth of supplies over a week in August? Probably not—so at best, the savings is on a month or two worth of supplies (and an admittedly pretty cool JanSport backpack). At least 17 states have sales tax holidays in August aimed at school supplies, which surely place increased pressure on supply chains for those goods nationwide.

The same can be said for gas tax holidays. We’re in the middle of hurricane season, and gas and diesel shortages are already predicted. And of course, evidence suggests it is possible that driving around in vehicles burning gasoline might not, you know, be great for the air we’re breathing. Perhaps a case could be made that the downsides are worth it if more individuals can afford to get where they need to be in a day—but unless they have underground tanks in their yard to stockpile gasoline, even “hoarders” will only be able to purchase slightly more than they usually do. That is just enough to, in the aggregate, cause shortages while simultaneously not insulating the hypothetical hoarder significantly from market fluctuations.

There are myriad ways to help those that are struggling without resorting to ineffective tax policy. We can target relief based on income. We can pursue other initiatives like subsidizing the purchase of electric vehicles. We can just send checks or direct deposits to folks to offset the inflationary effects on necessities. We could send people bicycles or bus passes or pencils. These broad-based, slapdash tax relief initiatives make for great political theater (at least initially) but do little to help folks actually suffering and will contribute to state budget shortfalls in an era where Covid-19 fallout has already taken a huge bite out of revenue.

At times, regressivity is political poison. For instance, regressive relief appears to be an obstacle to widespread student loan forgiveness. The basic idea that relief that is widespread, rather than targeted, reinforces the effects of the market. Tax holidays are regressive even when the underlying tax is also regressive, which seems paradoxical but which makes sense when looked at in application.

To use the sales tax example, which is a regressive tax—it comprises a larger percentage of costs for lower-income people than people with higher incomes because it isn’t keyed to income—the holiday does not ameliorate the regressivity owing to differing financial abilities to take advantage of the holiday. In other words, who has the financial flexibility to make a big purchase during a sales tax holiday? Wealthy people. Lower-income folks are just continuing to buy the same things they’re always buying and thus enjoy less relief in a pure dollar value sense. If you’re living paycheck to paycheck, you aren’t buying a new television during the sales tax holiday; you’re buying a new television when the old one breaks, if at all.

In most periods of economic disruption, the effects are not born proportionately across the income brackets, and our current inflationary situation is no different. Inflation takes more money out of the pockets of the poor through their purchasing patterns and widespread relief returns less to them, comparatively. Thus, tax holidays are regressive and necessarily reinforce income inequality. The only limiting factor is their effectiveness.

Tax as Payment for Services Received

From a compliance standpoint, the closer we can get to there being a widespread understanding of what services you receive for the taxes you pay, the better off we will be. The more the relationship between the government and the populace can be viewed as one of business and patron for tax purposes, the more persuasive the argument that tax dodging is committed on the backs of individuals, rather than “the state,” becomes.

The federal gas tax funds the Highway Trust Fund, which maintains highways and public transportation, and state sales tax accounts for around one-third of states’ revenues. To put it simply, they are necessary and decidedly not superfluous. But if they can be suspended in times of financial distress, it does suggest that they aren’t directly going toward funding the projects they claim to. If the gas tax holiday goes into effect, highways will still be maintained—such as they are. When states pass sales tax holidays, it isn’t as though they shutter the state parks and furlough state employees to offset the lost revenue. Things appear to continue as before, which strains the idea that the tax ever needs to be reinstated.

Say a local delicatessen, for example, announces that it will sell its sandwiches at cost. Footlongs go to $4 from $5, and people are jumping for joy in the parking lot to the extent allowed by the prosciutto coursing through their arteries. The deli remains open, and the owner continues driving their expensive Alfa Romeo to work. The bills are paid, the employees are retained, and everything seems to continue apace. If during periods of economic stress—stress that the deli owner was not insulated from—they were able to cut prices and continue to operate as usual, what does that suggest about prices prior to the meat markup holiday? When the inflation deflates and things return to normal, if the deli owner attempts to reinstitute pre-inflation prices, those same prosciutto revelers are going to be feeling as though the owner is simply padding the bottom line.

The same goes for taxes. If the government can suspend them during times of widespread economic disruption, the tax doesn’t need to exist, or at least doesn’t need to be as high as it is. That’s a problem when many of the taxes often suspended during a holiday need to be quite a bit higher. Sales tax holidays are expensive political theater paid for by the taxpayers.