Tony Banks told right away when he tested positive for Covid-19. More than a month later, he’s on the mend, but struggling with fatigue and shortness of breath that makes most physical activity feel like he’s just sprinted up a hill. Banks says he’s in no shape to return to work at the Indiana warehouse where he walks miles every shift.

Yet somewhere in an Amazon human-resources operation that already extended his medical leave once, Banks is seen as an employee abandoning his job. The company has twice in recent weeks initiated automatic termination proceedings against him for missing shifts.

“I understand that it’s overwhelming right now,” Banks says. “But for all the resources they have, it’s almost like a mom-and-pop operation.”

After suffering and during the early weeks of the pandemic, Amazon has hit another snag: a human resources department ill prepared to handle the thousands of requests pouring in from sick employees and those who need to stay home to care for their children or elderly relatives.

It’s unclear how many employees are stuck in limbo, but Bloomberg spoke with six such workers, who work in facilities from New Jersey to Indiana. They say they’re owed back pay for time spent on sick leave or in quarantine, have been scheduled for shifts while sick, or were denied leave despite providing documentation of conditions Amazon says should make them eligible to stay home without pay.

Many companies would struggle with this unprecedented emergency, made harder by the federal government’s largely ineffective response to a pandemic that has sickened more than 1.8 million people and killed more than 100,000. Meanwhile, state governments have grappled with an influx of unemployment claims.

But the design of Amazon’s HR department reflects the strengths and weaknesses of the company’s culture. It’s heavily automated, which helps Amazon grow quickly and restrain costs but these days leaves employees hitting dead ends with chatbots, smartphone apps and phone trees.

Three people with experience in the company’s human resources group say the unit has been weighed down by competing priorities. HR is expected to offer workers the same speedy customer service as Amazon’s customers, while practicing a level of frugality that Amazon sometimes takes to extremes, the employees say.

HR “is always struggling to automate and keep pace with the scale of the company,” says one of the people, who all requested anonymity because they signed confidentiality agreements. “The horror stories happen because [HR] people are overwhelmed. And they don’t have the resources and the mental capacity to deal with [workers] because they’re pulled in so many different directions. It’s bound to have negative, real-life human impacts.”

Amazon says Banks, the employee threatened with termination, shouldn’t have received those notices and that they were sent after Banks failed to submit proof of his condition when applying to extend the leave.

“These are unprecedented times, and we’re working fast to support our employees, partners and provide critical services to communities in need,” Lisa Levandowski, an Amazon spokeswoman, said in an email. “We’ve created 175,000 jobs across America, increased wages, adjusted time-off options, just to name a few, to support the hundreds of thousands of employees who work in our sites. Like all companies we’re rapidly adjusting to support our teams.”

Amazon has added some 2,500 full-time and temporary staffers to the human-resources teams that support its logistics group since the beginning of the year, she said.

The pandemic has created one of the biggest challenges in Amazon’s quarter-century history. While the company has benefited from a surge in online orders from home-bound shoppers, Covid-19 has sickened more than 1,100 employees and killed nine, according media reports and internal information gathered by workers. Amazon, which how many employees have caught the virus, has kept its operations running without widespread closures thanks in part to a hiring spree and new designed to adapt the company’s logistical prowess to public health guidelines.

Behind the scenes, however, the hiring binge and health crisis have put enormous pressure on a human-resources operation that was already struggling to keep up with Amazon’s growth. The company in the last half-decade has added an average of 130,000 workers a year. Then, during a six-week period beginning in March, Amazon recruited a mind-boggling 175,000 people to help it keep up with surging orders and plug warehouse slots abandoned by workers too afraid to show up. 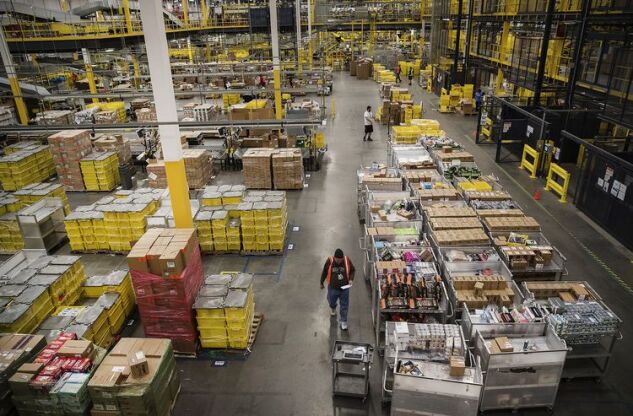 Amazon has worked for years to minimize the human effort behind administrative work. It’s part of a to deploy automation and advanced software, a bet that Amazon can invent the systems of the future and keep a lid on costs at the same time. Automatic processes are a necessity for an HR department that deals with many millions of employee inquiries a year. But those systems can be of little help to an overwhelmed staffer who needs time to sift through Amazon policies and government leave laws on behalf of an employee.

For a time, Amazon outsourced some of the work—sending employees seeking family or medical leave to ReedGroup, a provider of outsourced leave management services. But issues cropped up, including missed return dates and employees coming back from leave to find their paychecks hadn’t resumed. (ReedGroup didn’t immediately provide comment.)

Amazon began shifting the work back in-house late last year, completing the transfer on March 2, two weeks before the first Covid-19 case was confirmed among the company’s U.S. workers. Many employees stopped showing up or cut shifts short, moves Amazon supported with an offer of unlimited unpaid time off without risk of termination.

Andre Goodin, who works in an Amazon warehouse outside Baltimore, fell ill in April and was ordered into quarantine while he waited for a Covid-19 test that ultimately proved to be negative. Back at work, he had a second scare. A colleague he works with closely tested positive, days after a team meal during which a small group ate pizza together. Goodin, told by on-site HR to wait for Amazon to contact him if they determined he was at risk of exposure, decided to quarantine anyway.

Amazon says it has no record of Goodin coming into contact with someone who tested positive for Covid-19. The company says it uses video footage to determine such exposure and defines contact for the purposes of its contact-tracing program, as more than 15 minutes of exposure within six feet of a person.

By then, Amazon’s offer of unpaid time off had expired. The company said people suffering from Covid-19, those in quarantine and people who needed time to care for loved ones or shelter with at-risk family members, would be eligible for leave. But the deluge of requests overwhelmed Amazon’s ability to respond.

Goodin, still trying to get the pay he believes he’s eligible for his first quarantine, isn’t optimistic about ever getting paid for his second. He has hit dead ends when trying to use Amazon’s self-service options and says he has spent hours on hold waiting to speak to representatives of Amazon’s Employee Resource Center. “It went from being able to call and talk to a person, to now, they automatically redirect you to the website and hang up on you,” he says.

Goodin and other hourly warehouse employees typically use a smartphone app for most workplace issues. They can also ask for help from on-site human resources teams. For many tasks more complicated than requesting time off or fixing a missed time card punch, though, they must open a case with centralized HR teams in the U.S., Costa Rica and India.

Staff at an employee call center in San Jose, Costa Rica, were used to the occasional call from frustrated employees worried that delayed responses from HR would mean termination or a missed paycheck, according to someone familiar with the operation. Amazon was already struggling to manage call volume as it took back management of leave services from ReedGroup, the person said. Then the virus struck, and the phones began ringing incessantly. “Obviously, no one saw that this was going to happen,” the person says. “Amazon was, and is still not ready for the volume of cases they have.”

For some employees, being left in limbo has made them reconsider their choice of employer.

One worker at a warehouse on the East Coast, who toiled on weekends to help Amazon deal with the surge in orders, sometimes putting in 20 hours of overtime a week, was burned out. In April, she asked for unpaid leave to catch her breath. She made sure to put in the request early, giving Amazon almost three weeks to respond. Human resources never did.

“I’ve been their biggest supporter,” she says of Amazon. “I went from feeling 100% on them, to, I’m at zero. It’s like we’re replaceable.”

Another employee, who recovered from a case of Covid-19 caught early in the pandemic and had her illness confirmed by an antibody test, asked HR to compensate her for that sick time. The company misinterpreted the request, she says, and put her on unpaid leave, a sequence of events Amazon says its system shouldn’t allow. After days of trying to contact someone to fix it, and hours spent on hold, the worker says she was patched through to a call center employee in India, who couldn’t help her.

“They only opened a ticket,” she says. “The department I needed doesn’t work weekends.”

To contact the author of this story:
in Seattle at mday63@bloomberg.net

To contact the editor responsible for this story:
at rajello@bloomberg.net