Paul Marchese, a Chelsea, Massachusetts, police "drug recognition expert," runs the license of a driver who failed to let a pedestrian cross the street in a cross walk in Chelsea on July 31, 2019. Governor Charlie Baker wants to combat stoned driving by increasing the power and number of police trained to detect whether someone is high and a danger behind the wheel, even though the DRE program has been rejected in numerous cases by Massachusetts judges who ruled it lacks scientific validation.
Photo by Matthew J. Lee/The Boston Globe via Getty Images

Car crashes in the first three states to legalize recreational marijuana have soared as law enforcement and regulators struggle to define driving high, let alone determine how to fight it.

Colorado, Oregon, and Washington saw a combined 5.2% increase in the rate of police-reported crashes after legalizing recreational marijuana, compared with neighboring states where such sales are illegal, according to data compiled and analyzed by the Insurance Institute for Highway Safety. Researchers tallied crash rates between 2012 and 2016.

The increases have caught Congress and federal regulators off guard as states with legalized marijuana seek answers. Unlike with alcohol, scientifically there’s neither a proven definition of marijuana-impaired driving nor a method of detecting it, making it difficult to police and prosecute. Insurance companies say driving under the influence statistics don’t separate out marijuana and can’t be used to set rates, taking away another potential deterrent to driving high. And Congress has impeded regulator efforts to collect more information on the subject.

“Drunk driving is still the No. 1 killer on our roads,” said Helen Witty, president of Mothers Against Drunk Driving. “But drugged driving, as it’s legalized across this country, is a huge, emerging issue.”

Scientists know that drivers who are high tend to drive at lower speeds, have more difficulty staying in their lanes, and are slower to brake in an emergency than drunk drivers, the National Highway Traffic Safety Administration reported.

That may explain why traffic fatalities aren’t necessarily rising in the states that have legalized pot even as reports of accidents and collision claims have.

In Colorado, the first state to legalize recreational marijuana, officials have seen a decrease in marijuana-impaired traffic fatalities. About 8% of all traffic fatalities tested positive for five nanograms of THC in 2017, down from 12% in 2016, according to the Colorado Division of Criminal Justice. That’s the blood-THC level at which Colorado drivers can be charged with driving under the influence. Tetrahydrocannabinol, or THC, is the substance in marijuana that causes a user’s impairment.

Washington, however, noticed a spike in the number of fatally injured drivers who had the chemical in their blood after recreational sales started in 2014. The number of drivers involved in fatal crashes there who tested positive for any THC has more than doubled since 2013, the Washington Traffic Safety Commission said.

Police offers may use a Breathalyzer to confirm whether a driver’s blood alcohol level, known as BAC, is above the federal legal limit of .08%. Five states have limits for THC, according to the Governors Highway Safety Association, but there’s no scientifically accepted method of testing for impairment.

That’s because marijuana and alcohol affect the body differently. 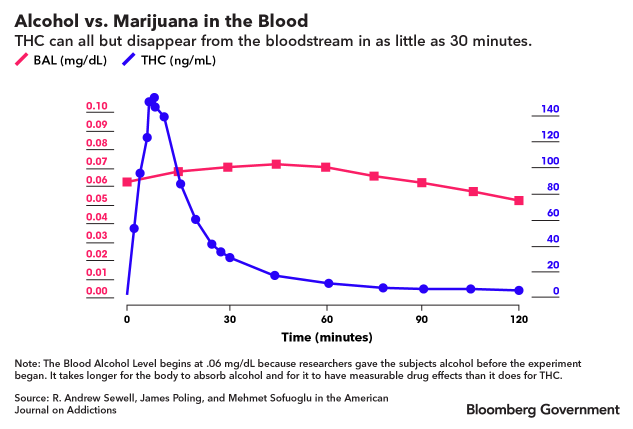 The presence in the blood of marijuana, unlike alcohol, doesn’t necessarily indicate impairment, said Staci Hoff, research director at the Washington Traffic Safety Commission. Also, THC can all but disappear from the bloodstream in as little as half an hour, making it difficult to capture evidence that a person is too high to drive.

Factors such as potency, how often someone consumes, and whether marijuana is consumed through an edible, oil, or smoke can affect driving, said Erin Sauber-Schatz, a transportation safety team leader at the Centers for Disease Control.

“It’s like we’re missing the right marker in order to identify impairment,” said Kyle Clark of the International Association of Chiefs of Police.

While auto insurers use DUI information to set prices, the available data generally doesn’t distinguish by substance. Until it does, marijuana use or the fact someone lives in an area where pot is legal won’t affect rates.

“We’re kind of on the brink of making those strides to be able to drill down forward,” said Janet Ruiz, spokeswoman for the Insurance Information Institute.

In Washington state, prosecutors are seeing more cases involving marijuana and driving because weed is now more accessible, said Moses Garcia, a traffic safety resource prosecutor there. Their toxicology labs have been so overwhelmed by requests for blood tests, it now takes them about 14 months instead of 30 days to turn around results.

The biggest challenge is a lack of reliable field tests to establish impairment, Garcia said.

“We’re trying to use techniques that we are familiar with,” for alcohol, Garcia said. “But those techniques, just from a common-sense perspective, they can’t work. They’re not useful. So most people under the influence of marijuana aren’t even caught.”

Scientists are working on roadside screening devices and saliva tests. One company is testing a smartphone app that would require drivers to complete four tasks. Researchers at the University of Pittsburgh are working on a marijuana breathalyzer. 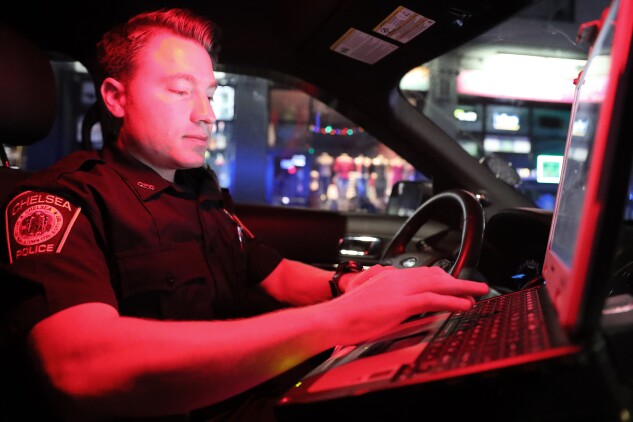 Paul Marchese, a Chelsea, Mass., police “drug recognition expert,” runs the license of a driver who failed to yield to a pedestrian in a crosswalk on July 31, 2019. Gov. Charlie Baker wants to increase the power and number of police trained to detect whether a motorist is stoned and a danger. In numerous cases, the state’s judges have rejected the DRE program as lacking scientific validation.
Photo by Matthew J. Lee/The Boston Globe via Getty Images

Right now, law enforcement officers called Drug Recognition Experts are the main defense against marijuana-impaired driving. DREs undergo two weeks of training in which they learn to determine which drugs impair a driver. Those officers follow a 12-step process that includes examining the eyes, taking a pulse, and checking muscle tone.

DREs found about 30% of people they screened in 2018 were impaired by cannabis, making it the top identified drug category in the U.S. However, DREs aren’t required to submit their evaluations, so that number may be incomplete. In the past few years, the police chiefs association has added information to its officer training about marijuana, said Clark, who manages the association’s Drug Recognition Expert program.

However, the scientific validity of DRE evidence has been challenged in court. A Massachusetts judge said earlier this year that a drug recognition expert’s evaluation couldn’t be used against a man charged with driving under the influence of drugs.

Even if roadside tests could accurately determine a driver’s level of THC, they probably wouldn’t indicate driving impairment given how quickly THC levels in the blood drop, Sauber-Schatz of the CDC said.

“I’m sorry that the legalization has happened before the science is there because I think that’s a huge danger for our society and the protection of our people,” MADD’s Witty said.

States are moving on marijuana and driving faster than lawmakers in Washington, D.C., because marijuana is still federally illegal.

Congress asked NHTSA in the last surface transportation law to report on marijuana-impaired driving. Lawmakers also requested a Congressional Research Service report on the topic. In spending laws, lawmakers have encouraged the agency to increase awareness of the Drug Recognition Expert program, especially in states with legal recreational and medicinal marijuana.

But Congress has blocked federal funding for the NHTSA National Roadside Survey in four of the last five spending laws, a Bloomberg Government analysis found. The survey randomly samples drivers to provide a snapshot of drugged and drunk driving. NHTSA last conducted the survey in 2013-2014, and before that typically conducted it about every 10 years.

Survey efforts in 2013-2014 received public backlash,including from several members of Congress who said the roadside tests violated driver privacy, said J.T. Griffin, MADD’s chief government affairs officer. Money for the survey wasn’t barred in the 2019 spending law, nor is it blocked in the 2020 transportation appropriations bill the Senate passed in late October

House Transportation and Infrastructure Chairman (D) said his committee “would look at” incorporating funding for marijuana-impaired driving research in the next surface transportation bill, which would replace the 2015 law after it expires in September 2020. NHTSA is currently studying how to understand better how drugs influence drivers, an agency spokesperson said in an email.

“The first thing federal policy needs to be is investment in research to develop real-time technology to protect people who may be heavily under the influence of marijuana,” said DeFazio. “Right now, that doesn’t exist.” Recreational marijuana is legal in DeFazio’s home state of Oregon.

At the state level, officials from at least four states in the northeast agreed in October to a uniform set of policies for marijuana-impaired driving. They agreed to coordinate DRE training and enforce a uniform standard for blood and saliva cannabis tests, said Max Reiss, spokesman for Gov. Ned Lamont (D-Conn.).

“We have to figure out: how do we deal with this patchwork of regulations around the region,” Reiss said.

In Colorado, transportation officials launched a statewide campaign shortly after legalization to teach drivers that they could get a DUI for driving high, said Sam Cole, the department’s communications manager. The agency also works with dispensaries to distribute flyers about marijuana-impaired driving at the checkout counter.

“I feel like we’ve won the culture war that it is a bad idea to drink alcohol and drive,” said Garcia, the safety resource prosecutor in Washington state. “People will agree with you that no, you shouldn’t be drinking and driving. But if you ask the same question about marijuana, they’re not sure.”

Christina Brady in Washington also contributed to this story.

To contact the reporter on this story: in Washington at crozen@bgov.com