The Biden administration is defending President Donald Trump’s 2018 expansion of tariffs on Chinese goods against lawsuits brought by thousands of U.S. companies, which claim Trump overstepped his authority and that his own statements and tweets undermined the official justification for the crackdown.

Attorneys for importers including , , , and claim Trump illegally increased the number of Chinese goods subject to duties under Section 301 of the U.S. Trade Act of 1974.

But the Biden administration, in its first substantive answer to the complaints, said a president’s trade policy through the U.S. trade representative is due substantial deference.

“The Court should not interpose” because no clear legal violation occurred, the Biden administration argued in a brief filed March 12 at the U.S. Court of International Trade in New York.

While the new administration has made a clear break from Trump in most other policy areas, it won’t do so with the Chinese tariffs it inherited because they provide leverage in future negotiations with the world’s biggest U.S. trade competitor, international trade experts told Bloomberg Law.

Section 301 allows the executive branch to respond to unreasonable or discriminatory acts, policies, or practices of foreign governments that restrict U.S. commerce.

But Walmart, Disney, and the other suing companies, which seek duty refunds, argue Trump’s motivation wasn’t to protect U.S. intellectual properly and technology—as his administration initially said—but was a response to China’s retaliatory trade actions and other policies. Some say it was also meant to fatten Treasury Department coffers.

The Trade Act didn’t give the Trump administration the authority “to escalate its focused investigatory findings into an an open-ended trade war,” Walmart argues.

Lawsuits challenging the tariffs have flooded the U.S. Court of International Trade, which typically handles about 300 new cases per year. More than 3,700 challenges have been filed to the Section 301 duties, illustrating the tremendous economic impact of these tariffs, particularly on small businesses, said Laura Siegel Rabinowitz of Greenberg Traurig LLP, who represents several of the plaintiff companies.

The tariff challengers could face a tough legal road, because the trade court is likely to be deferential to the president’s judgment in an area of foreign policy, said Raj K. Bhala, Brenneisen Distinguished Professor specializing in international trade law at the University of Kansas School of Law.

In 2018, the Office of the U.S. Trade Representative (USTR) launched an investigation that ultimately concluded that “acts, policies, and practices of the Chinese government related to technology transfer, intellectual property, and innovation are unreasonable or discriminatory and burden or restrict U.S. commerce.”

Trump used this finding as justification for U.S. tariffs on List 1 and List 2 Chinese goods worth a combined $50 billion in 2018 trade values under the authority of Section 301.

Lists 1 and 2 covered products are from “industrial sectors that contribute to or benefit from the ‘Made in China 2025' industrial policy,” and include such industries as aerospace, information and communications technology, and automobiles, Trump’s USTR said. They don’t include “goods commonly purchased by American consumers such as cellular telephones or televisions.”

But after China announced it was retaliating with tariffs on U.S. goods, Trump significantly ramped up the Section 301 duties. He eventually expanded them to cover an additional estimated $320 billion of Chinese goods—Lists 3 and 4a, which includes foods and beverages, clothing, and footwear. Planned duties on List 4b products like electronics and toys were canceled under a U.S.-China “Phase 1” deal reached in late 2019.

To help manage the tsunami of lawsuits that followed, the trade court last month created a “master case” to streamline proceedings. 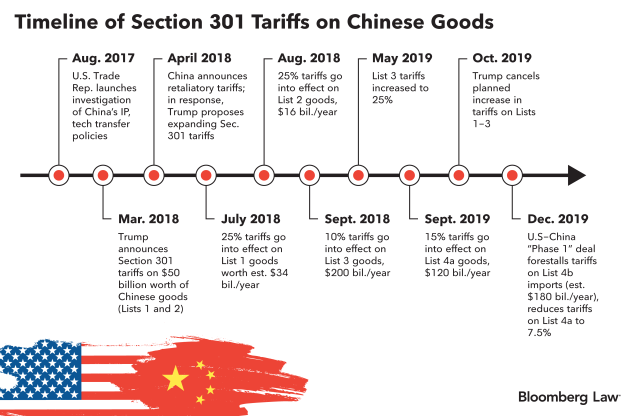 Procedure wise, the Trump administration waited too long after the USTR’s investigation of China to announce the List 3 and 4 expansion, said Ron Oleynik of Holland & Knight, which represents several plaintiffs.

The trade law gives USTR the authority to modify preexisting Section 301 duties, but not to increase them, Rabinowitz told Bloomberg Law. The Trump administration also failed to give the public sufficient notice of the proposed duty expansion and opportunity to comment, she said.

USTR isn’t allowed to increase the Section 301 duties “for reasons other than the acts, policies, or practices that were found to burden U.S. commerce in the underlying investigation,” a complaint from Samsung Electronics America adds.

Statements from administration officials, including tweets by Trump, indicate that the U.S-China trade imbalance, China’s currency policies, and a desire to collect revenue may have all motivated the expansion, some of the lawsuits allege.

“Why should I, as President of the United States, allow countries to continue to make Massive Trade Surpluses, as they have for decades, while our Farmers, Workers & Taxpayers have such a big and unfair price to pay?” Trump tweeted around the time of the expansion. “Not fair to the PEOPLE of America! $800 Billion Trade Deficit.”

Another Trump tweet said: “Billions of Dollars are pouring into the coffers of the U.S.A. because of the Tariffs being charged to China, and there is a long way to go. If companies don’t want to pay Tariffs, build in the U.S.A. Otherwise, lets just make our Country richer than ever before!”

The timing and relative magnitude of the duties are also suspect, said Oleynik: How could USTR’s report on China’s practices originally be used to justify duties on just $50 billion worth of goods, but that same report later justify expanding the duties to cover goods worth hundreds of billions?

Although President Joe Biden criticized Trump’s trade policy on the campaign trail, his administration may now see the tariffs as leverage in complex geopolitical negotiations with China, said Chad P. Bown, senior fellow for trade policy at the Peterson Institute for International Economics.

Although much of the cost of the Section 301 tariffs are borne by Americans, they hurt China’s economy too, Bown noted.

The administration also may want to defend an expansive view of the executive branch’s trade authority, for the sake of Biden and future presidents, Bhala said.

The Justice Department’s just-filed “master answer,” while vague on details, bolsters that view, saying the president’s decisions and USTR’s implementation of them present a “non-justiciable, political question.”

The Trump administration had the authority to promulgate List 3 and List 4 “because the burden or restriction on United States commerce of China’s acts, policies, and practices that were the subject of the Section 301 action continued to increase,” and because Lists 1 and 2 weren’t effective at eliminating China’s unfair trade practices, the Justice Department said.

The law “does not limit modifications to merely delaying, tapering, or terminating an action,” it argues.

The Biden administration added that USTR’s actions in promulgating List 3 and List 4 satisfied the Administrative Procedure Act, particularly under the law’s lower bar for matters of foreign affairs.

Section 301 was enacted to give the president broad discretion to respond to unfair foreign practices, Bhala said. The trade court may be wary of “running roughshod” over Congress’ intent by drastically limiting how the executive branch can use this tool, he said.

Procedurally, the trade court is likely to designate a handful of “test cases” from the many lawsuits, covering all the salient claims, Oleynik said. A steering committee will be created to coordinate among the plaintiffs’ many attorneys, he said.

These lawsuits could take months or years to resolve. There’s likely going to be appeals, maybe even to the U.S. Supreme Court, given the amount of money involved, Rabinowitz said.

To contact the reporter on this story: in Washington at bflood@bloomberglaw.com