The courtroom of the U.S. Supreme Court in Washington D.C.
US Supreme Court/Franz Jantzen/Courtesy of Getty Images

Brett Kavanaugh’s stormy elevation to the U.S. Supreme Court has rekindled calls for justice term limits to reduce the influence of partisan politics and to prevent the court from getting stuck in its ways.

The concept has currency within legal and political circles and with the public, especially following Kavanaugh’s politically paralyzing confirmation.

“Setting terms for justices at least might moderate the violent political partisanship which has enveloped Supreme Court nominations,” Doug Bandow, a senior fellow at the libertarian think tank Cato Institute, wrote for The American Spectator.

“That would benefit all Americans,” Bandow said.

It would also curb the “dictatorial lengths of justices’ current terms,” which are just under 27 years on average since 1970, as well as reduce “the specter of cognitive decline in a justice,” said Gabe Roth of Fix the Court, a watchdog group advocating for more Supreme Court transparency.

The key question doesn’t appear to be whether imposing term limits is desirable. Instead, scholars and others wrestle with how to do it. There are two possible ways: a constitutional amendment or legislation.

A constitutional amendment, however, is viewed as “pie in the sky” because it requires two-thirds approval in the House and Senate as well as three-quarters of all the states, Tara Leigh Grove, a federal courts professor at William & Mary Law School in Williamsburg, Va., said. 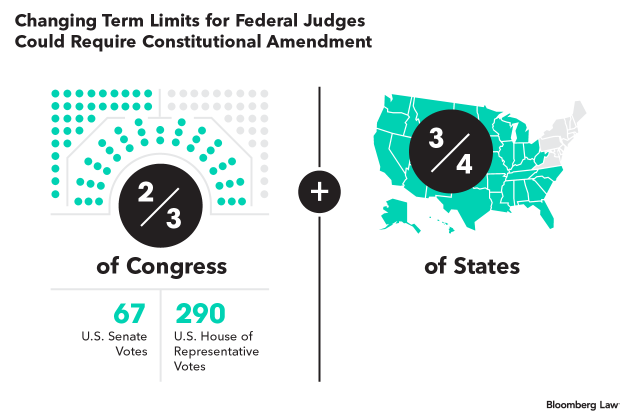 Passing a law would be easier, but not everyone agrees that it’s constitutional.

The “predominant view in academia” is that the Constitution says that justices and federal judges have life tenure unless they’re impeached, Grove said.

The language of Article III of the Constitution says that federal judges “shall hold their Offices during good Behaviour,” which establishes this idea of life tenure, Grove said.

Nevertheless, under the original understanding of the Constitution, the framers likely had informal term limits in mind simply because people didn’t live “nearly as long” as they do today, Daniel R. Ortiz, director of the Supreme Court Litigation Clinic at the University of Virginia School of Law in Charlottesville, Va., told Bloomberg Law.

The average age of the justices is nearly 70 and the average length of a justice’s tenure has nearly doubled since 1970 to more than 26 years, up from around 14 years during the nation’s first 180 years, a Fix the Court report shows.

How many years a justice should serve is up for debate.

A popular proposal is 18 years, Michael J. Gerhardt, a constitutional law professor at the University of North Carolina School of Law in Chapel Hill, N.C., said.

It’s a “sensible compromise” because it enables justices to “have an impact on the court’s doctrine” but allows others to have a say in regular cycles, Gerhardt said.

A term limit shouldn’t be so short that the justices can’t settle into their seats and figure out what the job is but on the other hand, it shouldn’t be so long that each party believes the political stakes are so high, he said.

Roth agrees that term limits would bring predictability into the equation and would “lower the temperature” of the nomination process. But a constitutional amendment isn’t necessary, he said.

Legislation could define “office” in Article III as the “life-tenured office of federal judge” but go on to state that only 18 years of that time can be served on the Supreme Court, Roth said.

Jamal Greene, a professor at Columbia Law School, also favors legislation to set term limits because a constitutional amendment is “practically impossible,” he told Bloomberg Law in an email.

He proposes legislation that is consistent with Article III and that would retain retired judges at full salary but control their active status through a fixed term.

“The argument that ‘good behaviour’ protection prevents legislation of this sort is a colorable one,” but the good behavior standard “is meant to be a contrast with at-will removal by the executive” and term limits “are very different from that,” Greene said.


Whatever the route to introducing term limits, it wouldn’t be an easy path, given the country’s political climate.

And it’s “risky business” introducing such a change to the constitutional structure, Grove said.

But it may be worthwhile, she said.

Term limits allow greater diversity in all sorts of ways. They bring a “new energy” to the court, and “protect against the entrenchment of policies that no longer command popular support,” Gerhardt said.

There would be less “gridlock” because one person’s view won’t matter as much, Ortiz said.

A downside is that the Supreme Court might have less “institutional legitimacy” because the term limits might make the justices appear “more ordinary” and less “almighty,” Ortiz said.

But “frankly, that kind of respect is misplaced and unhealthy,” he said.

The “hurdle” to passing legislation imposing term limits is lower but the question remains: Is the country ready for the change?

“I don’t see the support out there,” Grove said.

But Roth disagrees, saying the public is receptive to the idea.

“In every poll I’ve conducted on the topic over the last few years, around 60 or 70 percent of Americans across party lines support the idea” of term limits for the justices, he said.

The idea of term limits “has wide support among legal scholars across the ideological spectrum, and all it would take is a few centrist senators, under divided government, forcing it as a condition of voting for the nominee of a president from the other party,” Greene said.

And it’s not a completely foreign idea. Although term limits don’t exist at the federal level, 33 states impose a mandatory retirement age on judges.

And every state but Rhode Island either has a mandatory retirement age or a term with a specific length, after which judges either have to retire or sit for another election, Roth said.

To contact the reporter on this story: in Washington at mstanzione@bloomberglaw.com

To contact the editor responsible for this story: at jkamens@bloomberglaw.com