Argentina’s tax revenue fell sharply in April during the nationwide lockdown, outlining how severely measures to contain the coronovirus pandemic hit the economy.

Revenue dropped 10% in April from a month earlier to 399 billion pesos ($5.95 billion at the official exchange rate), the third straight monthly drop. From a year ago, tax revenue rose 12%, lagging the 48% inflation rate, according to government figures published Tuesday. 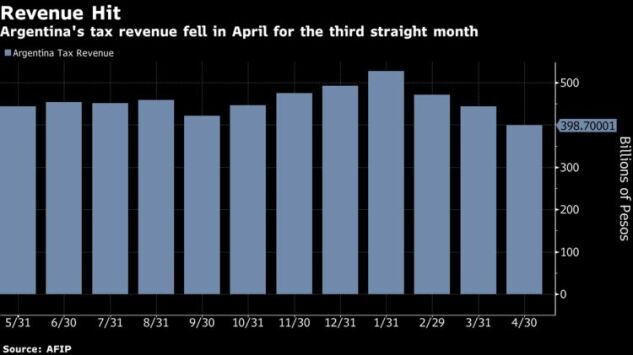 It’s the first major indicator illustrating the severity of economic damage last month. Argentina began a nationwide lockdown on March 20, which officially runs until May 10, though it could be extended again. The International Monetary Fund forecasts Argentina’s economy contracting 5.7% this year after declining each of the past two years.

The falling tax take comes as Argentina struggles to renegotiate $65 billion in debt, largely with foreign creditors. Bondholders have already rejected the government’s offer, and Economy Minister says the nation can’t afford to pay more. Guzman the Financial Times Tuesday that a counteroffer from creditors wasn’t acceptable for the government.

If the government doesn’t reach an agreement with creditors by May 22, Argentina would default for the ninth time in its history.

To contact the reporter on this story:
in Buenos Aires at pgillespie29@bloomberg.net

To contact the editors responsible for this story:
at jspinetto@bloomberg.net