The Australian Federal Court judgment in the Singtel case has provided guidance for taxpayers.
Photographer: Roslan Rahman/AFP via Getty Images

Paul McNab of DLA Piper discusses the recent landmark court ruling of the Federal Court of Australia in a transfer pricing dispute involving Singapore Telecom and the Australian Taxation Office, in which the Court dismissed the taxpayer’s appeal.

On Dec. 17, 2021 the Federal Court of Australia delivered judgment against Singapore Telecom Australia Investments Pty Ltd (STAI) ([2021] FCA 1597), the taxpayer in a transfer pricing dispute against the Australian Taxation Office (ATO). That was the last official sitting day for the Court in 2021 and it will officially commence sittings again Jan. 31, 2022. December and January are generally a lengthy holiday period in Australia.

Counsel and the taxpayer in this matter, however, now have 28 days to file any appeal. The entire hearing, including joint examinations of overseas witnesses, was conducted over Microsoft Teams and with an electronic court book.

The entities in these transactions are all subsidiaries of Singapore Telecommunication Ltd (Singtel), a Singapore resident listed company.

The dispute concerns assessments for the years 2011, 2012 and 2013. The ATO disallowed interest deductions claimed in Australia on notes issued under a loan note issuance agreement (LNIA). STAI’s appeal statement recorded the primary tax in dispute as AU$267 million ($191 million), interest of AU$58 million.

The judgment provides taxpayers in Australian disputes with further information on the approach the Court may take to:

On these points the Court responded as follows:

Point 1: The Court supported a view that although the starting point was the actual transaction, it was possible to substitute more than simply the terms directly relating to consideration when identifying the transaction to be priced. The Court concluded that it was “a reasonable hypothesis” that independent parties would have given a parental guarantee. This was despite there not appearing to be evidence of actual policy of Singtel on this point, or usual practice in the market (see paras 324 to 327 and 344). No guarantee fee could be assumed.

Point 2: The Court concluded that the second amendment (especially the change to a rate premium) would not have been agreed to by independent parties, despite evidence that the overall result in interest actually paid was within the range arm’s-length parties might have paid (see paras 330 to 332 and 338).

This second point is perhaps the most important. There has been much recent debate in Australia about whether a transaction can be “recharacterized,” or replaced with a different one for arm’s-length pricing purposes. In both Glencore and Singtel, the taxpayer had a particular contract in place, then varied its terms in a manner that (the Commissioner says) disadvantaged the revenue. In both cases the taxpayer argued that the overall result was still within an arm’s-length range.

In Glencore the Court effectively priced the actual contract in front of it and accepted that the outcome was within an arm’s-length range. It seemed to have been helped by evidence that sufficiently similar transactions existed between arm’s-length parties. In Singtel the Court focused on a conclusion that the taxpayer had failed to show that arm’s-length parties would have entered into the changes.

The question of whether this approach is appropriate, and the surrounding logic, could be one of the key points in any appeal.

Point 3: The practice was endorsed by the Court, with insights given into the factors which were considered in each case to have added to or subtracted from the value of their evidence.

Point 4: The Court is unwilling to accept objections to the Commissioner’s practice (para. 353).

The case was heard before a single judge of the Federal Court, and appeals lie to the Full Federal Court and, by leave, to the High Court. It represents only the second substantive matter in Australia (after Chevron Australia Holdings Pty Ltd v Commissioner of Taxation [2017] FCAFC 62) where the courts have considered the taxation treatment of cross-border intragroup funding.

The taxpayer called one lay witness, and two experts. The ATO called two experts. The experts prepared a joint report for the Court and gave evidence together in two “concurrent” sessions (important processes in Australia, where the experts, although paid by the parties, have duties to assist the Court rather than simply advocate a position).

Facts of the Case

The case arose from events in 2001, when Singapore Telecommunications Limited (Singtel) made a takeover offer for the majority of the shares in Cable & Wireless Optus (“Optus,” or “SOPL”) from Cable & Wireless (C&W). The Singtel group was reported to have paid AU$14.2 billion for Optus. Optus was publicly listed, so detailed financial forecasts were not available to the bidders. Optus was also engaged in plans to build a significant new mobile network, with the intention of becoming Australia’s second-largest mobile operator.

The final acquisition terms and public bid structure were recorded in an implementation deed between C&W and Singtel entered into on March 25, 2001, and other related documents.

The public offer also provided alternatives of “shares,” “shares and cash,” and “shares, cash and bonds.”

The Singtel Group agreed to provide an interest-free unsecured subordinated loan to Optus to fully fund buy-backs. Ultimately this was AU$6.2billion.

The parties agreed that the bidder and lender could not be the same company, and SAI was the Singtel group’s bid vehicle. From its incorporation until June 28, 2002, STAI was wholly owned by Singtel, but on that date it became owned by Singtel Australia Investment Limited (SAI). SAI was a BVI incorporated company which was resident in Singapore. STAI was an Australian incorporated and resident company.

In August 2001, STAI and SAI executed an option agreement under which STAI granted a put option to SAI, and a call option was granted by SAI to STAI for the cost of the Singtel Optus Pty Ltd (SOPL) shares which had been acquired. The option grant price was nominal.

After completion the Singtel Group received information suggesting that Optus required significant short-term funding, but that in the medium term significant free cash flow would arise. 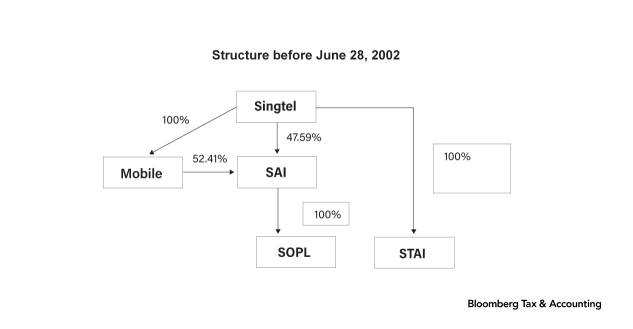 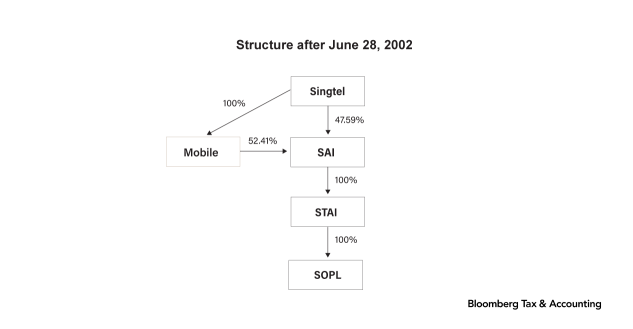 These steps had the effect of placing debt into an Australian taxpaying company (STAI). It is important that the Commissioner did not challenge the introduction of debt as such, but rather the terms of the debt. It has been understood for some time that the ATO has focused on so called “debt push down transactions,” and there has been some uncertainty about the Commissioner’s approach to such transactions.

The Commissioner said that one effect of the interest-free period was to avoid interest withholding tax being paid in the early years, when the company was unlikely to have taxable income.

Overall, the Commissioner disallowed about one-third of the taxpayer’s claim. This related to the effect of the second and third amendments outlined above.

The Australian Tax Commissioner mounted several attacks, essentially based on a view that arm’s-length parties would have capitalized interest in the circumstances rather than used the premium to compensate for the interest-free period, and that an overall effective interest rate of 5.61% would have been used.

The small number of transfer pricing decisions in Australia makes each matter particularly important until a larger body of case law is developed. It is also important that each matter is the subject of careful review at a full court level.

It is hoped that the taxpayer takes the opportunity to appeal: There certainly appear to be grounds on which an appeal might be made.

Paul McNab is a Partner with DLA Piper Australia.

The author may be contacted at: paul.mcnab@dlapiper.com