A new tax regime is now applicable to foreign employees and directors working in Belgium. Above: the Eurostar train from Brussels to London at the Brussel-Zuid - Bruxelles-Midi - Brussels-South train station
Photographer: Jasper Jacobs/BELGA MAG/AFP via Getty Images

Laurent Donnay de Casteau of Advisius reviews the new tax regime recently introduced for foreign individuals working in Belgium, and discusses the requirements for businesses and potential benefits for employees who are eligible.

Published in the last hours of 2021, the program law of December 27, 2021 abolished, as from Jan, 1, 2022, the special tax regime for foreign executives (dated 1983) and implemented a new tax regime, applicable to employees and directors working in Belgium. Researchers benefit from some specific measures under the new regime.

During this transitional period, foreign individuals working in Belgium should carefully monitor the effects of this reform and avoid missing the due dates.

A transitional period of two years is provided for expatriates willing to maintain the former regime. For expatriates active in Belgium by the end of 2021 to switch to the new regime—when meeting the conditions—their application must be filed before July 31, 2022.

Which Enterprises can Apply for the New Regime?

The following are eligible for the new regime:

Conditions for the Ordinary Regime at Taxpayer Level

Access to the new regime is aimed at company directors and employees, without any nationality requirement, for a period of five years—extendable by three years—under the following conditions:

Conditions for Researchers to Apply

The impatriate regime provides for special conditions for salaried researchers (excluding directors), which diverge from the conditions of the ordinary regime by not requiring a minimum remuneration, but requiring a qualification and certain level of scientific activity:

The application for the impatriate regime—ordinary regime or researcher regime—must be formally requested, using specific forms, by the company or permanent establishment or association within three months of the impatriate taking up their post in Belgium.

The tax authorities have three months from the application date to issue their decision on it.

The impatriate can benefit from the following advantages:

Impatriates may benefit from this special regime for a maximum of eight years—five years initially, with the possibility to apply for an extension of three additional years. In the case of an occupation in Belgium exceeding eight consecutive years, the impatriate will no longer benefit from the special tax regime at the end of this period and will then be taxed in Belgium according to the ordinary rules.

Taxpayers and researchers who on Jan. 1, 2022 satisfied the conditions to benefit from the new impatriate special tax regime and who have been active in Belgium for less than five years, have two options:

Not opting for the new regime could result for example from a long-term benefit—longer than five years—of the former regime, or because, based on an individual assessment, it appears that the former regime generates much larger benefit than the new one.

Faced with this significant change, within the specific deadlines: 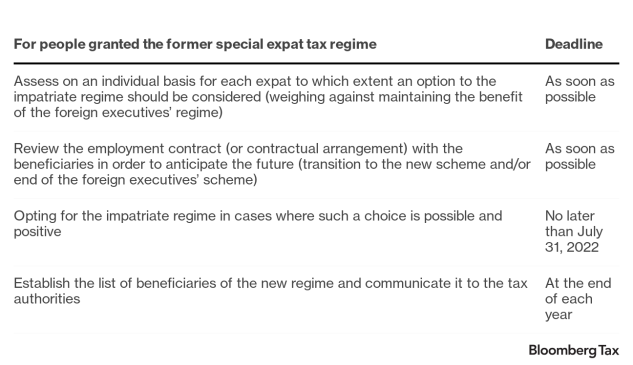 Laurent Donnay de Casteau is a tax lawyer and partner at Advisius (Brussels).

The author may be contacted at: donn@advisius.law