In Part 2 of a series on the introduction of a corporate tax system in the United Arab Emirates, Parwin Dina of Global Tax Services considers some specific issues which arise and how these may be resolved, in the context of international standards.

In Part 1 of this series on the proposed corporate tax system in the United Arab Emirates, we set out the main drivers for the proposal to introduce this tax in the UAE. We also highlighted key aspects to consider for the proper implementation of corporate tax by UAE businesses.

In this Part 2 of this series, we will discuss specific issues:

Deduction of Certain Expenses and Nature of Penalties

In general, business-related expenses are deductible from the total taxable income of a taxable person. Most countries have a rule for allowing certain expenses as deductions. The Netherlands, for example, has a concept that expenses incurred, even if not vital to the business, are deductible if they are based on sound business motives. Of course, such business motives should be substantiated by the taxpayer and the deductions are subject to the principle of proportionality. Separately, depreciation of business assets (that are exposed to wear and tear) is also provided for under the law.

Meanwhile, in the UK, a similar concept exists: Section 54 of the Corporation Tax Act, 2009 states that deductions are not allowed unless the expenses are incurred “wholly and exclusively for the purposes of the trade,” or if the losses are connected with or arising out of the trade.

In Egypt, there is no general rule for the deduction of expenses from a corporate tax perspective. The Egyptian tax law provides a list of specific items that can be allowed as a deduction. These include, for example, depreciation of fixed assets, certain types of donations, and certain employers’ contributions.

Though we are still awaiting the UAE draft law, we can expect similar criteria for expenses to be deductible in the UAE’s tax system.

We will discuss the issue of certain expenses that are not allowable. In this regard, paragraph 5.34 of the Public Consultation Document is significant: “No deduction will be allowed for certain specific other expenses such as administrative penalties, recoverable VAT, and donations paid to an organisation that is not an approved charity or public benefit organisation.”

Under the proposed Pillar Two regime, the policy for disallowed expenses (including expenses accrued by the Constituent Entity for fines and penalties) is they are generally not deductible. The policy consideration to propose denial of deduction of fines and penalties has been provided by the OECD as follows:

“77. Similar to bribes, fines and penalties imposed by a government are commonly disallowed for tax purposes. However, the policy rationale for denying a deduction for fines and penalties is to limit the economic cost to only the person that committed the act. This rationale would be diluted if the taxpayer were allowed to share the burden of the penalty with all taxpayers (by way of tax deduction for it).”

Nevertheless, such denial of deduction itself has a materiality threshold exceeding 50,000 euros ($50,600). (Commentary to Article 3.2.1 of the Pillar Two proposal, paragraph 75)

So far, in the Public Consultation Document, there appears no materiality/de minimis threshold. The larger corporations/groups (which are subject to Pillar Two) have some leeway in deduction of certain “policy disallowed expenses,” because the OECD recognizes the difference between a small traffic fine (of say, 50 euros) as against a large securities fraud (involving fines exceeding 1 million euros). (Commentary to Article 3.2.1 of the Pillar 2 proposal, paragraph 78)

The sentence below in the Commentary explains the difference quite succinctly:

“The purpose of the threshold is to continue to allow deductions for smaller fines that may not be specifically recorded as separate items in the accounts of the Constituent Entity. This approach avoids the complexity of tracking small fines and penalties for GloBE purposes while at the same time preventing MNEs from escaping a Top-up Tax because of a few large, non-deductible, fines or penalties.”

In the UAE, there appears to be the concept of interest as well as other shariah profit related returns; the latter is not the point of our discussion in this article, rather our focus is on interest payments. Some of the penalty provisions, for example, under Cabinet Resolution No. 49 of 2021, have all the characteristics of an interest payment, where the penalty is based on a percentage. For example, Section 1, No. 12 of Table 1 of the Cabinet Resolution has a percentage-based monthly penalty (4% per month on the base of the unpaid tax). The nature of the offense and the penalty (for this discussion) reads as follows: 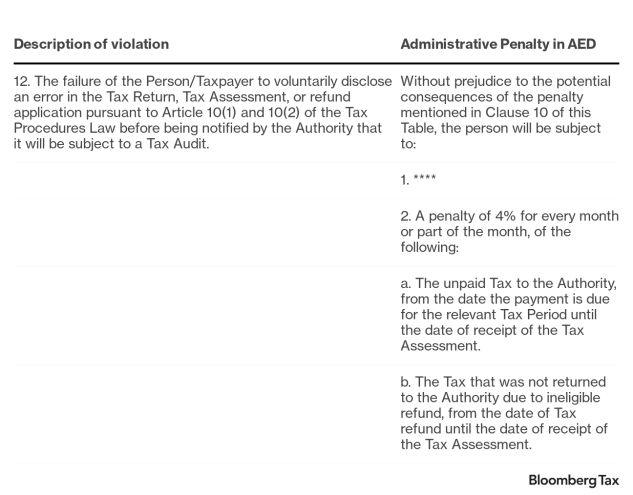 This provision, even if not in form, is certainly in substance, an interest—which ought to be deductible following the logic of the OECD but does not appear to be so per the Public Consultation Document. We have written an earlier article explaining the wording and its meaning in the Cabinet Resolution.

In order to truly align with the spirit of the OECD Commentary, there is certainly scope for the Federal Tax Authority to provide a clarification to the effect that the penalty provisions that are in substance interest liabilities ought to be excluded from the scope of paragraph 5.34 of the Public Consultation Document.

The relevant portion of the Public Consultation Document for the airline and shipping industry is as follows:

“5.23 As a major logistics centre and international travel hub, the UAE CT regime will exempt income earned by a non-resident from operating or leasing aircraft or ships (and associated equipment) used in international transportation, provided the same tax treatment is granted to a UAE business in the relevant foreign jurisdiction under the reciprocity principle (author’s emphasis).”

Reading this provision, it is clear the UAE would like to exempt income earned by a nonresident shipping or aircraft entity on account of operating and leasing the aircraft or ships used in international transportation, subject to the other jurisdiction also reciprocating the obligation by exempting UAE-based shipping or airline companies earning income on account of international transportation in such foreign jurisdiction.

It must be noted that the Pillar Two proposal exempts airline and shipping companies from its ambit, even though the Public Consultation Document does not reflect that position explicitly. Paragraph 9.7 of the Document mentions that the UAE is working, and will provide further information subsequently, on integration between the CT regime and the Pillar Two Regime.

So far, the following is clear—an airline/shipping company with either an income of less than 375,000 UAE dirham ($102,000) or being a part of a group with a global turnover of more than 750 million euros, will not be subject to tax in the UAE. Similarly, a nonresident airline/shipping company will also not have its income taxable in the UAE, as long as the aircraft or ships are involved in international transportation (subject to reciprocity). Therefore, the only aspect of shipping/airline income that would be taxable is the likelihood of obtaining reciprocity.

Reciprocity Principle Followed by Other Countries

In this context, we will examine four countries that have among the highest number of shipping companies as residents—Panama, Liberia, Singapore, and Hong Kong.

Under the Panama–UAE tax treaty, Article 9(1) states: “Profits of an enterprise of a Contracting State from the operation of ships or aircraft in international traffic shall be taxable only in that State.”

This is the same as Article 8(1) of the 2017 OECD Model Tax Convention. By operation of this article, a bilateral reciprocity principle has been upheld (i.e., UAE resident shipping companies are not taxed in Panama, and vice versa). We also understand that the Panamanian tax system is territorial in scope. Therefore, income of a Panamanian resident entity earned in territories outside Panama is not taxable in Panama. Hence, reciprocity will, in all probability, be offered by Panama to the UAE. Accordingly, the UAE will also exempt Panamanian companies involved in international transport and having earned income in the UAE.

As regards Liberia, the tax treaty between Liberia and the UAE is not yet in force and not available in the public domain in English, as far as we are aware. Examining the domestic tax law of Liberia (p. 73-4), it provides essentially that income derived from the sale, operation, rental or chartering of a vessel is not from a source in Liberia—except to the extent such income is derived from transportation or used exclusively within Liberia—and therefore not subject to Liberian income tax. Hence, reciprocity should be available in this case.

In the case of Singapore, the UAE–Singapore tax treaty also has a provision in Article 8(1) identical to that of the OECD Model Convention 2017. Hence, reciprocity ought to be offered between the two countries.

Finally, in the case of Hong Kong, Article 8(1) of the Hong Kong–UAE tax treaty similarly also borrows from the equivalent provision of the OECD Model Convention 2017, and reads: “Profits of an enterprise of a Contracting Party from the operation of ships or aircraft in international traffic shall be taxable only in that Party.” (The last word, “Party” appears to be a typographical error, and should have been “State.” Also see Article 8 here)

So, in short, it should not be a major difficulty to obtain reciprocity from the four major countries where shipping companies are largely resident. Of course, there has not yet been any insight into the procedures to obtain the exemption on account of reciprocity—for example, whether a certificate would be required from the other country, or whether the reciprocal exemption is automatic. Nor is there any information yet on whether an alternative special regime will be available for the shipping industry.

There are plenty of options available for the UAE that can be borrowed from other countries that offer flexibility considering industry-specific peculiarities. Broadly, they include 1) a special profit regime, including an exemption from qualifying income from international shipping activities, and a tonnage tax; and 2) special tax incentives, such as accelerated depreciation systems, special profit calculations and special tax rates.

Possibly in the later stages of the CT implementation phase, information in this regard will also be disclosed.

In summary, we note that most tax systems have the basic principle that expenses incurred for earning income are generally deductible. Some countries provide further comfort by not requiring the taxpayer to prove the necessity of having incurred such expenditure for earning such income. There are many examples that the UAE can use while formulating their expense deductibility policy under the proposed CT regime.

It is not yet explicit that some penalty expenses (which practically partake of the nature of interest) would indeed be deductible as prescribed by the OECD. There is certainly leeway available for the UAE Ministry of Finance to clarify that such deductibility is in line with international standards.

We also observe that most major countries where shipping companies reside have provisions in their systems to offer reciprocity. Accordingly, foreign shipping companies should not have difficulty in invoking the equivalent exemption under the UAE proposed law. At the same time, more clarity is required in ascertaining the specific circumstances and steps needed for shipping/airline companies to obtain such exemption.

There is no doubt that the Ministry of Finance and the Federal Tax Authority are working hard while formulating tax policy to ensure the tax system adheres to the important principles—efficiency, simplicity, and flexibility. However, businesses, tax advisers, civic society, and academia ought to play a role since they are stakeholders in ensuring robustness and addressing any apparent shortcomings or inconsistencies within the tax system.

The comments in this article are for general information and are not intended as advice. Readers should seek professional advice where relevant.

The author may be contacted at: parwin.dina@global-taxservices.com