Denmark’s government will grant tax breaks to businesses affected by the coronavirus as part of a series of measures worth $20 billion.

Large businesses will be given an additional 30 days to pay value added tax, while all companies will be granted four additional months to pay their labor contributions. The government is also lifting the ceiling on businesses’ tax accounts, so that corporations can avoid paying the negative interest rates they are charged when placing cash in the bank.

“The government will use the necessary tools to support the Danish economy, Danish companies and Danish employees,” said Finance Minister , who estimated the liquidity boost provided by the measures at around 90 billion kroner ($14 billion).

The announcement came as the number of confirmed cases in the country climbed to 156.

Earlier on Tuesday, Prime Minister warned of the “special challenges” facing business as she announced that all flights to Denmark deriving from so-called red zones are to be canceled later today.

According to Denmark’s assessment, the red zones include Iran, parts of China, South Korea and northern Italy. 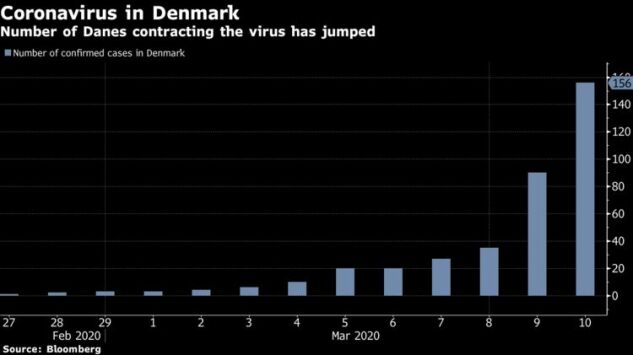 With European Union leaders due to hold a conference call on the crisis later Tuesday, Denmark’s prime minister said the bloc would likely discuss some kind of limitation for travel to and from the most affected areas.

“I will not propose to close the border, but we will have a discussion this afternoon about how we handle internal travel patterns in the EU,” Frederiksen told reporters in Copenhagen. “The EU’s open borders are not to blame for the global corona spread,” she said, but “we need to minimize the spread and that means that travel activities should be minimized.”

The government has already recommended the suspension of all public gatherings attended by more than 1,000 people. The measures designed to support businesses were due to be presented by the finance, business and taxation ministers at 3.30pm.

(Updates with details of measures from first paragraph)

To contact the reporter on this story:
in Copenhagen at mbuttler@bloomberg.net

To contact the editors responsible for this story:
at cwienberg@bloomberg.net