Negotiators working to overhaul global tax rules have given themselves until 2023 to put the new plan in place, rewriting decades of tax laws and treaties.

If countries successfully negotiate all the remaining details of the two-pillar plan, endorsed by the Group of 20 finance ministers over the weekend, they’ll need to turn the principles of the deal into new laws and agreements effective across the 132 countries that have backed it so far. The OECD will be tasked with building a multilateral tax treaty (MLI)—a sort of super tax treaty that countries will have to sign and ratify. Countries will also have to change their domestic laws.

After years of negotiations, the success of the plan still depends on whether it can be implemented, particularly in the U.S.—where it will have to be sold to Congress—and the EU, which likely needs support of all member states to enact the plan’s minimum tax rules. U.S. Treasury Secretary Janet Yellen and European finance ministers over the weekend said Congress and the European Union would support the deal.

“We aim to have a full implementation of this international taxation system no later than 2023,” French Finance Minister Bruno Le Maire said.

The OECD-brokered plan—driven by concerns big tech companies like Amazon and Facebook aren’t paying enough in taxes—would move more tax revenue to where companies have sales, known as Pillar One. It would also set at least a 15% global minimum tax rate, known as Pillar Two.

Yellen said she hoped U.S. lawmakers would approve a global minimum tax this year and consider Pillar One by spring of 2022.

To meet the 2023 deadline, negotiators will have to secure agreement on remaining political questions on the plan’s design by October, and then spend 2022 crafting the treaty and legislative changes used to implement it. But that deadline may end up being too ambitious, tax advisers and former officials from the Organization for Economic Cooperation and Development said.

“Essentially if they are talking about implementation by 2023, which strikes me as slightly ludicrously optimistic, then they’re talking about the whole package of both domestic law changes and treaty changes,” said Richard Collier, associate fellow at the University of Oxford’s Saïd Business School’s Centre for Business Taxation and a tax adviser at the OECD until May.

It may take longer than 2023 for all countries to ratify a multilateral treaty instrument after signing it, said Carlos Protto, director of international tax relations at Argentina’s Ministry of Economy and a member of the OECD’s Steering Group of the Inclusive Framework, speaking in his own capacity and not representing the government. 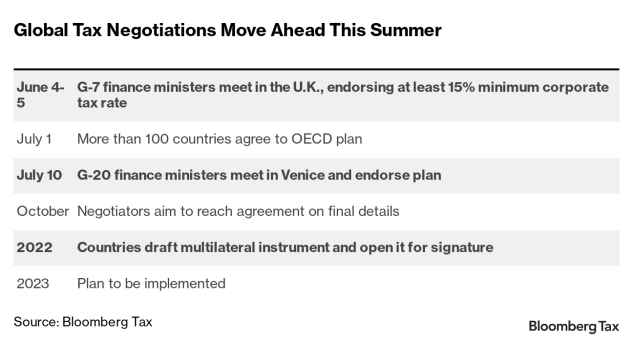 The MLI will have to be “very close to perfect out of the gate,” according to Mary Bennett, senior counsel at Baker McKenzie, who led the OECD’s tax treaty, transfer pricing, and financial transactions division from 2005 to 2011.

Countries must agree on the text of a treaty, and then need time to analyze it before signing, she said—and that’s before the time it will take for all countries to ratify, which will vary depending on each country’s political process.

“I think we’re looking at four to five years of putting the pieces in place, before it goes into effect in a wide enough number of places that you can say we have a new system going,” Bennett said.

The first thing negotiators must do is spend the next few months securing agreement on remaining open questions in the plan, so a final agreement can be reached in October, the countries’ July 1 statement said.

And to get to implementation, negotiators will also work on multilateral instruments for both Pillar One and Pillar Two, model legislation for both pillars, and an MLI for Pillar Two’s ‘subject to tax rule,’ Protto said. The subject to tax rule would allow developing countries to request a provision be added into their treaties with developed countries to override low withholding tax rates on payments like income and royalty.

“It’s a huge achievement to have got to where we got to, but it’s not the end,” said Will Morris, deputy global tax policy leader at PwC.

Pillar One gives a bigger slice of tax revenue to the countries the biggest multinationals sell into, rather than where they’re based. It has a limited application but where it applies, it will upend the existing bilateral tax treaties and domestic laws that determine when and how much a country can tax a company.

That means that Pillar One will need a multilateral treaty instrument for the whole system to work.

The OECD knows how to create a multilateral instrument: The organization’s 2015 anti-base erosion and profit shifting project included an MLI that updated existing treaties with anti-tax avoidance measures. That MLI took about 15 months of work to build, said Jesse Eggert, who worked on the project as a senior adviser with the OECD’s Center for Tax Policy and Administration and is now a principal at KPMG LLP in Washington.

Work on the Pillar One MLI will include the legal framework to implement the new rules, tax certainty mechanisms, and a way to override existing provisions in bilateral treaties that would conflict with Amount A, Pillar One’s reallocation rules, Protto said.

The instrument will also need to include a mechanism for relieving double taxation, including identifying which countries will offer the double tax relief, Eggert said.

Besides the MLI, Pillar One would also require model legislation to help countries change domestic laws, such as introducing a taxing right for Amount A, Protto said.

“That is a pretty significant undertaking, if you think about all the complexity of package, and that means you’re going to have pages and pages of domestic law,” Collier said.

But perhaps one of the biggest questions about the new Pillar One MLI is how and when it will be brought into force.

The BEPS MLI applies treaty by treaty, coming into effect in bilateral treaty relationships after both countries have ratified the instrument and agreed on which parts of their treaty it will change.

The new MLI will have to be ratified by all the countries that want to implement it, which won’t happen instantly. Domestic political processes vary. The earlier MLI, which was signed by the first group of countries in 2017, today has over 60 ratifications out of 95 jurisdictions that have signed.

But such a gradual approach may not work with the Pillar One MLI, because its concerns will mostly be multilateral. For example, a U.S.-based multinational could be operating in 100 countries that get a small portion of revenue reallocation under Amount A. Applying the new rules to one treaty at a time could create a new maze of questions for how Amount A applies during the transition.

One approach could be waiting, and letting the number of country ratifications reach a “critical mass” before the treaty goes into effect, Protto said.

That would ensure a big enough group of countries had implemented and ratified for Amount A to function, but it also raises new questions for the architects of the MLI. They’ll need to figure out how many countries constitute ‘enough’, and ensure the critical mass includes big, developed headquarter countries—like the U.S. or Germany, where revenue will come from.

“That’s going to be one of those very critical design questions that nobody is talking about yet,” Bennett said.

The timing of the repeal of digital taxes is also delicate, and could depend largely on the U.S. Countries using the unilateral measures to glean revenue from tech giants while they wait for a global digital tax agreement will likely want assurance the U.S. really will ratify before they give up their own taxes.

A DST repeal provision “would have to be linked in some way to either the U.S. ratifying it, which I think would be a very difficult thing to write into it, or subject to every country ratifying it,” Morris said.

A multilateral instrument for Pillar Two would set up a legal framework for the new rules—and the subject to tax rule also calls for changes to existing bilateral treaties, Protto said.

Before an implementation plan can be completed, some key details still need to be agreed—including the rate, and questions about what’s included in the tax base, Morris said.

“It will be a technically complex piece of legislation,” he said.

—With assistance from Christopher Condon, Birgit Jennen, and William Horobin.