House Democrats have a more modest plan to boost international taxes for U.S. multinationals compared to other plans under consideration.
Photographer: Stefani Reynolds/Bloomberg

House Democrats have proposed a plan to boost international taxes for U.S. multinational companies that is more moderate than the other Democratic plans on the table.

The plan from Democrats on the House Ways and Means Committee, released Monday, differs in some respects compared to the plans offered by President Joe Biden and Senate Finance Committee Chairman Ron Wyden (D-Ore.). The House plan proposes a smaller increase to the minimum tax on U.S. companies’ foreign income compared to Biden’s proposal, and retains a tax exemption for some of that income which both the Biden and Wyden proposals would eliminate. And it keeps a key tax break for U.S.-held intellectual property that Biden and Wyden would scrap or heavily revamp.

The plan would need the support of nearly all Democrats in the narrowly divided Congress—with Vice President Kamala Harris breaking a tied vote—as part of the reconciliation process to bypass Republican support.

The House Democrats’ plan is “a more moderate proposal, but I would also frame it as a proposal that was fashioned to have as broad appeal as possible,” said Craig Hillier, who leads EY’s Americas International Tax and Transaction Services.

“I think the committee put a lot of effort into modulating their proposals so they are palatable to a broader swath of their constituency,” said Loren Ponds, an attorney at Miller & Chevalier and former House Ways and Means Committee majority tax counsel.

“It’s definitely more corporate-friendly than the Biden plan,” said Steve Wamhoff, director of federal tax policy for the left-leaning Institute on Taxation and Economic Policy. But in big-picture terms, he added, it’s also “a big improvement over the tax code as it exists now.” 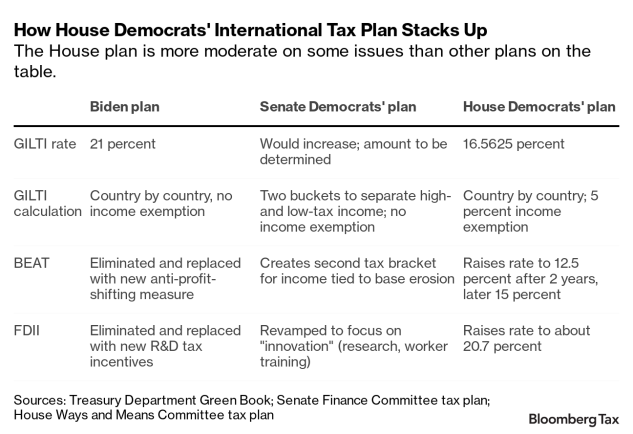 The 16.5625% rate, while an increase from current levels, is relatively close to the 15% minimum rate that’s planned globally under part of an agreement—known as Pillar Two—to overhaul the global tax system. Some members of Congress have expressed concern about imposing a rate like Biden’s 21% proposal that would be significantly higher than the global minimum rate.

The House plan would also retain an exemption for the first slice of a company’s foreign income on physical assets but would reduce the exemption to 5% from the current 10%. The exemption would stay at 10% for income from U.S. territories. Both the Biden and Wyden plans would eliminate the exemption entirely.

The House plan would calculate foreign income country-by-country, instead of the current “blended” approach that allows companies to offset their high-taxed income with low-taxed income. Both the Biden and Wyden plans would also shift to country-by-country, though the Wyden plan uses an approach that would sort all countries into high-tax and low-tax buckets, instead of treating them individually.

Despite the rate increase, the House Democrats’ plan could be “a better GILTI,” because it attempts to be more transparent about things like timing differences, said Daniel Bunn, vice president of global projects at the right-leaning Tax Foundation.

“This is the first attempt I’ve seen to make GILTI work as intended,” Bunn said. “I think that’s an improvement, certainly relevant to the Biden plan.”

On the base erosion and anti-abuse tax, or BEAT, the House Democrats would maintain the current 10% rate through 2023—10% of payments deemed to erode the tax base. But then they would raise it to 12.5% for 2024 and 2025—accelerating by two years a similar rise that had been planned—and then to 15% starting in 2026.

Wyden would retain BEAT but create a second, higher tax bracket, at a rate to be determined, for income tied to base erosion. Biden would scrap BEAT entirely in favor of a different approach, known as SHIELD, that focuses on denying companies tax deductions for income in low-tax countries.

Bunn said it appears House Democrats are “trying to triangulate” their plan between current law, the administration’s proposal, and the global tax agreement’s attempts to limit the impact of companies’ attempts to shift profits from one country to another in search of the lowest tax rate.

Wamhoff suggests that BEAT should be eliminated. “I’m very skeptical BEAT can be made to work well,” he said.

“I think congressmen can still point to the fact that they are trying to increase exports,” Hillier said.

The FDII and GILTI changes are part of a pattern in the House Democrats’ plan. in which they accelerate the timeline on planned rate changes that were set to happen anyway in the future under current law, said Stephen Shay, senior tax fellow at Boston College Law School and former deputy assistant Treasury secretary for international tax affairs. “Basically it just moved forward a couple of years.”

FDII offers companies a lower tax rate on foreign income generated by intellectual property held in the U.S. The House plan scales back that tax break but doesn’t eliminate it. Biden wants to eliminate FDII entirely in favor of other tax incentives for research and development. Wyden would keep FDII but revamp it to focus on deductions for “innovation” expenses like research and development and worker training.

Retaining FDII is “reasonable policy,” Bunn said because it maintains a worthwhile incentive for companies.

To contact the reporters on this story: at mrapoport@bloombergindustry.com; in Washington at igottlieb@bloombergtax.com