Hungary’s government pledged to slash funding for political parties, hike taxes on banks, and reintroduce a tax on larger retailers to help increase funds available to fight the pandemic. Above, shoppers stand outside a supermarket in Budapest on March 31.
Photographer: Akos Stiller/Bloomberg

Hungary’s government pledged to slash funding for political parties and hike taxes on banks in its first major budget overhaul since Prime Minister secured powers to rule by decree this week.

Political parties will lose half of their state funding this year while other steps will increase the burden on lenders and reintroduce a tax on larger retailers, , the minister in charge of the Prime Minister’s office, said in a video briefing Saturday.

The steps will increase funds available to fight the coronavirus pandemic and rebuild the economy to 1.35 trillion forint ($3.96 billion). The government is also preparing further budget initiatives that may amount to as much as 22% of gross domestic product and will be accompanied by central bank policy changes, Gulyas said.

Orban has faced of staging a power grab made under the cover of the Covid-19 crisis and drawn criticism from European Union member states. The measures announced on Saturday echo contentious steps initiated by Hungary a decade ago to contain a widening budget deficit.

About 30,000 have lost their jobs in Hungary as a result of the pandemic, with 4,000 new unemployed appearing each day, according to Gulyas. The government has widened a target for this year’s fiscal shortfall to 2.9% of economic output from 1%.

Gulyas didn’t elaborate on how the government will collect a planned 55 billion forint in additional revenue from banks. Lenders have called for a reduction in the bank tax to help mitigate the impact of a moratorium on all loan payments this year. The freeze may cut bank revenue by 450 billion forint this year, according to Banking Association estimates.

“The government is initiating a significant reorganization of the budget, and will force others to contribute with burden sharing,” Gulyas said. “This includes political parties, international firms, banks and municipalities.”

Orban is copying a blueprint used in the early years of his return to power in 2010 by taxing lenders and large firms to fund a budget deficit. Those measures contributed to muted lending and sluggish growth, and caused Hungarian assets to underperform peers in eastern Europe. 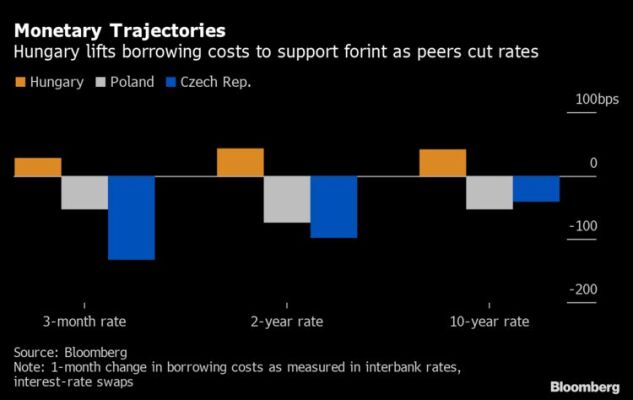 The government risks a repeat of that experience, with the forint weakening to a record low 369.5 against the euro this week. Hungary’s central bank by almost 50 basis points in a bid to contain the drop, the only country in the region to tighten policy during the crisis.

“There’s a strong speculative attack against the forint,” Gulyas said. The currency will recover as Hungary’s economy doesn’t stand out from others impacted by the virus, he said.

To contact the reporter on this story:
in Budapest at meder4@bloomberg.net

To contact the editors responsible for this story:
at anicholson6@bloomberg.net