The French reverse charge mechanism for import VAT offers benefits for businesses importing goods into France: it also promises to be a beneficial regime in the event of a “no-deal” Brexit.

Economic operators are increasingly seeking to take advantage of the significant potential benefit from the new French reverse charge mechanism for value-added tax (“VAT”) on imports of goods into France (“RCIVAT”).

Two and a half years after the entry into force of the “Blue Economy Act” (Loi pour l’Economie Bleue, n° 2016-816, dated June 20, 2016), it is now possible to draw up a comprehensive list of the legal and technical conditions for the application of this preferential regime.

The benefit of implementing this regime is not negligible: the RCIVAT mechanism allows any taxable person to be relieved from having to pay French import VAT to customs when importing goods and to report these import operations on its own VAT return. No tax is then paid at the time of customs clearance of the goods and the corresponding VAT is deductible as it becomes payable.

Not only does this allow ensuring the neutralization of the financial costs of VAT for taxable persons with full deductible rights, it also neutralizes the cash impact that may be caused by the payment of VAT to the customs authorities, the refund of which would have to be claimed back. 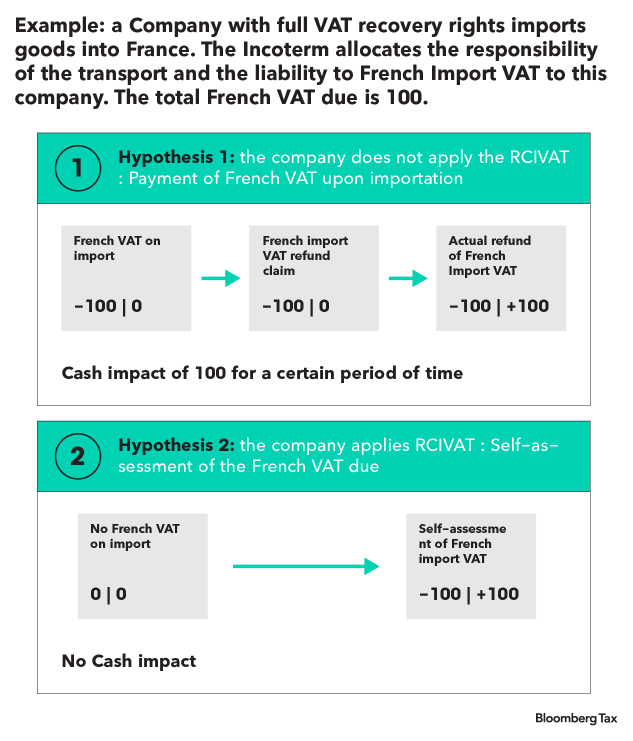 These procedures are however known to be more time-consuming and to provide less guarantee of refund than the domestic procedure.

With no French VAT credit to claim, economic operators would not have to go through to these steps to ensure financial neutrality.

Substantive Conditions for Applying for the RCIVAT

Article 1695 of the French Tax Code provides quite flexible conditions for obtaining the authorization to apply the RCIVAT scheme. As from January 1, 2017, any taxable entity, whether established in France, on the territory of a member state of the EU or outside the EU, and which is liable to pay French VAT on imports or upon withdrawal of goods from customs or tax suspensive regimes, has the possibility to benefit from the RCIVAT regime.

However, to be authorized to perform this self-assessment, the taxable person making the request must fulfill the following conditions:

It is also specified that taxable entities which qualify as authorized economic operators (“AEO”s) are deemed to fulfill all the conditions mentioned above.

In particular, companies established outside the EU can benefit from the RCIVAT when the customs agent they have appointed in France benefits from AEO status.

Formal Conditions to Obtain the RCIVAT

Once granted, the authorization shall be valid as from the first day of the month following the date of issuance of the answer (or the day on which the two-month period has ended).

The authorization thus granted is valid for a period of three years and is tacitly renewable.

Under these conditions, any economic operator can benefit from the RCIVAT on imports and make significant cash management improvements.

However, most of these regimes are subject to somewhat stricter rules and implementing procedures than the French RCIVAT. The latter thus stands for foreign operators as an easy-to-implement preferential regime which allows streamlining of reporting obligations of inbound flows coming from non-EU countries into France.

In a Brexit context, the implications of which on the flow of goods largely remain to be defined, the use of the RCIVAT mechanism promises to be an important asset. From this perspective, the flows of goods from the U.K. into France, which are performed on a reverse charge basis as of today, would still be performed under an equivalent liability regime, should the French RCIVAT be applied.

Furthermore, according to the “VAT for businesses if there’s no Brexit deal” document of August 23, 2018, in case of a “hard Brexit” (i.e. an absence of exit deal between the U.K. and the EU), the U.K. tax authority, HM Revenue and Customs, has already warned that U.K. or EU entities shall no longer be able to use the electronic platform implemented by the “8th Directive” procedure in order to request credit refund of the VAT borne in the other country.

After March 30, U.K. companies will have to use the “13th Directive” procedure which entails more restrictive obligations. 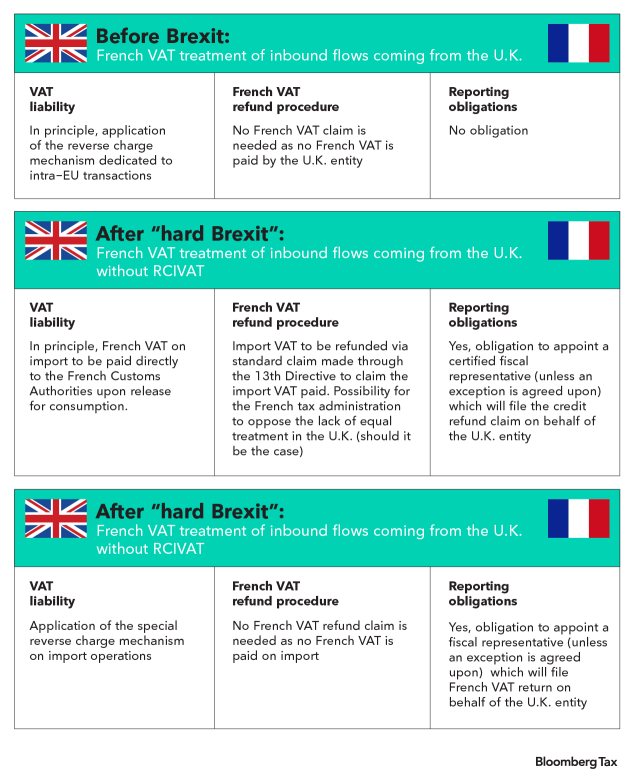 The implementation of a RCIVAT scheme would thus be an efficient way to avoid many of the adverse consequences deriving from this major event.

Romain Dayan is an Indirect Tax Senior Manager and Zaccharie Pérais is an Associate at Fidal, Paris.