In the current crisis, securitization may provide businesses with much needed liquidity. Oliver R. Hoor and Keith O’Donnell of ATOZ Tax Advisers (Taxand Luxembourg) analyze to what extent Luxembourg securitization companies may be impacted by EU-wide interest limitation rules, and consider the “standalone” entity exception.

Securitization is a technique used to convert a broad range of illiquid assets or claims into tradable securities. As such, securitization transactions may create liquidity for the original lenders (or originators) and present an attractive and diversified investment opportunity for investors.

In the current Covid-19 crisis, securitization may contribute to the efficiency of financial markets and provide businesses with much needed liquidity. In this article, the authors analyze to what extent Luxembourg securitization companies may, or may not, be impacted by the EU-wide interest limitation rules.

As from 2019, Luxembourg tax law provides for interest limitation rules that have been implemented in accordance with the EU Anti-Tax Avoidance Directive (ATAD). Therefore, when a securitization company realizes income other than interest income (or economically equivalent revenues) the interest expenses incurred may be partially non-deductible for tax purposes.

However, the interest limitation rules provide for certain “carve-outs” that may apply in case of securitization companies. Firstly, certain securitization undertakings are subject to specific EU prudential regulation (Regulation 2017/2402) and these “EU-regulated” undertakings are explicitly excluded from the scope of the interest deduction limitation rules.

Secondly, the interest limitation rules provide for a “standalone” entity exception that may apply if a company is not part of a consolidated group for financial accounting purposes and has no associated enterprises (or a permanent establishment)—a fact pattern typical of many securitizations.

Article 168bis of the Luxembourg Income Tax Law (LITL) limits the deductibility of “exceeding borrowing costs” generally to a maximum of 30% of the corporate taxpayers’ earnings before interest, taxes, depreciation and amortization (EBITDA). The scope of the interest limitation rules encompasses all interest-bearing debt instruments irrespective of whether the debt financing is obtained from a related or a third party. Exceeding borrowing costs up to an amount of 3 million euros ($3.3 million) may be deducted without any limitation (that is a safe harbor provision).

Mechanism of the Interest Limitation Rules

“Borrowing costs” within the meaning of this provision are interest expenses on all forms of debt, other costs economically equivalent to interest, and expenses incurred in connection with the raising of finance, including, without being limited to:

As far as interest income and other economically equivalent taxable revenues are concerned, neither ATAD nor Luxembourg tax law provides for a clear definition of what is to be considered as “revenues which are economically equivalent to interest.” However, given that borrowing costs and interest income should be mirroring concepts, the latter should be interpreted in accordance with the broad definition of borrowing costs.

Securitization transactions can involve a broad range of underlying assets (or rights) that may generate interest income or other types of income. When the underlying assets are interest-bearing debt instruments, the interest limitation rules should not result in adverse tax consequences as the interest income should exceed (or at least correspond to) the amount of interest expenses incurred in relation to debt instruments issued to the investors.

In contrast, when a securitization company invests into assets that generate income other than interest income (or revenues which are not economically equivalent to interest) the interest limitation rules may result in the non-deductibility of a significant part of the interest expenses.

The interest limitation rules may, for example, apply in case of investments into distressed debt. Broadly speaking, investments into distressed debt rely on the acquisition of non-performing loans or other distressed debt instruments at a price below par value. Thereafter, the idea is to realize a return upon the disposal or repayment of the debt instrument once the financial situation of the debtor improves. When the income realized in relation to assets cannot be classified as interest income (or economically equivalent revenues) the securitization company would incur exceeding borrowing costs which may not be fully deductible for tax purposes.

Entities Excluded from the Scope

The interest limitation rules provide for a number of carve-outs. For example, securitization undertakings that are subject to EU Regulation 2017/2402 are explicitly excluded from the scope of the interest deduction limitation rules. The three main conditions to fall within the scope of this regulation include (i) different tranches of securities with subordination, (ii) segmentation of the credit risk associated with the exposure of the assets, and (iii) the notes need to be held by at least two different note holders. (Given that these requirements may not be fulfilled in many cases, this regulatory status is not an option in each and every case.)

However, before adopting this regulatory status, investors and originators should carefully consider the burdensome requirements of this regulatory regime (if the conditions can be met).

The EU Commission recently sent a letter of formal notice to Luxembourg requesting the abolishment of this exception as it is considered that this carve-out goes beyond the allowed exemption of “financial undertakings.” Thus, this carve-out might be abolished.

The interest limitation rules further provide for a carve-out for standalone entities which are entities that:

The potential application of standalone entity exception in case of securitization companies is further analyzed in the following section.

Thus, the thrust of Action 4 and the ATAD interest deduction provisions was not to limit interest deductibility per se but to limit its use as a BEPS tool in group situations. Hence, the standalone entity exception, as well as a group “equity escape provision,” were proposed in Action 4, adopted in ATAD and implemented in Luxembourg law. Simply put, the purpose of these exceptions was to carve out situations where there was clearly no group manipulation of debt, because there was either no group (standalone), or no manipulation of debt levels (an individual company’s indebtedness being the same or less than the group as a whole).

The third parties used are often charitable trusts or foundations such as Dutch Stichtings. The question then arises as to whether securitization companies held in such orphan structures may fall within the scope of the standalone entity exception. In substance, it may seem obvious that they should be within scope of the exception as the fundamental purpose of orphan arrangements is to create a vehicle that is standalone for a host of non-tax reasons.

In an orphan structure, a securitization company is typically established with minimum share capital (12,000 euros in the case of a Luxembourg limited liability company). Thereafter, the shares are transferred to, for example, a charitable trust that operates as a share trustee on behalf of the beneficiaries.

Given that the income derived from the underlying assets are largely transferred to the investors (for example, in the form of interest paid under notes), the only payments made by the securitization company to the charitable trust are (limited) profit distributions and capital repayments at the end of the lifetime of the investment period.

The chart below depicts a typical orphan structure. 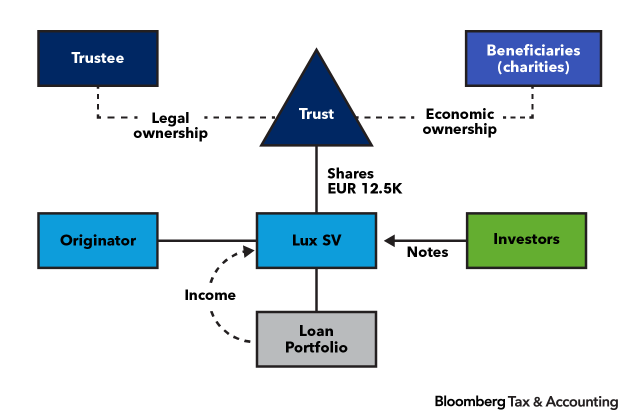 Securitization companies in orphan structures are generally not part of a consolidated group for financial accounting purposes, nor do they have a PE in another jurisdiction. Therefore, the standalone entity exception should apply as long as the securitization company has no associated enterprise.

According to Article 164ter (2) of the LITL, “associated enterprises” are defined as individuals or entities (within the meaning of Articles 159, 160 or 175 of the LITL) that own a participation of 25% or more in terms of voting rights, capital ownership or profit entitlement.

Entities within the meaning of Articles 159 and 160 of the LITL comprise Luxembourg and certain foreign entities that are treated as corporate taxpayers. Article 175 of the LITL covers entities that are viewed as transparent from a Luxembourg tax perspective (in particular, partnerships). In essence, Article 175 of the LITL replicates the wording of Section 11bis of the Tax Adaptation Law according to which general partnerships, limited partnerships, special limited partnerships, economic interest groupings, European economic interest groupings and other types of partnerships are deemed not to have a legal personality distinct from that of their partners.

So what of a trust? A trust is a three-party fiduciary relationship in which the trust or settlor transfers assets to the trustee for the benefit of a third party (i.e. one or more beneficiaries). In the case of an orphan structure, the beneficiaries of a trust may be charities (often in the form of trusts, at least in the Anglo-Saxon world) or the trust itself may be a charity with a defined class of beneficiaries. Thus, the legal ownership rests with the trust, whereas the beneficial or economic ownership belongs to the beneficiaries. However, the trust is not specifically mentioned in either the list of entities that are liable to corporate tax (Article 159 of the LITL) or in the list of entities that are transparent for tax purposes (Article 175 of the LITL).

In many cases, Luxembourg securitization companies are held by foundations such as a Dutch Stichting. Here, it has to be analyzed on a case-by-case basis whether the foundation is an entity within the meaning of Article 159 or 160 of the LITL (corporate taxpayer) or Article 175 of the LITL (transparent entity). This requires a detailed analysis of the precise constitution and operating rules of the foundation.

As a consequence, the individual beneficiaries of a charitable trust should be considered as the owner of the shares in the securitization companies from a Luxembourg tax perspective and, provided that these beneficiaries do not constitute an associated enterprise (having a right to more than 25% for example), the securitization company should not have an associated enterprise within the meaning of Article 164ter (2) of the LITL. If the immediate owner of the shares were a trust with other trusts as beneficiaries, then the same analysis would apply effectively looking through to the ultimate beneficiaries of these other trusts.

The implementation of the interest limitation rules has created significant legal uncertainty for Luxembourg securitization companies. In particular, the exact scope of the standalone entity exception and the interpretation of concepts such as interest and economically equivalent expenses (or revenues) give rise to a lack of clarity.

The interest deduction rules in BEPS Action 4 , ATAD, and Luxembourg law, in seeking to avoid groups engaging in base erosion by debt manipulation, give relief on two grounds that are relevant here: standalone entities (no group) and “equity escape” relief (no manipulation). In the spirit of the law, one would expect securitization companies to have got relief on one or both grounds. However, in practice it is essential to determine who is the economic owner of the shares in the Luxembourg securitization company and if such economic owner(s) are associated enterprises within the meaning of Luxembourg tax law.

Ultimately, securitization is an important niche market of the Luxembourg financial centre that may also play its role in overcoming the economic effects of the current Covid-19 crisis. In particular, investments into distressed debt are expected to become a flourishing asset class which may also contribute to businesses obtaining much needed liquidity. Securitization needs to function without unexpected tax charges due to non-deductibility of interest paid on notes.

As a first step, players should look carefully at existing or planned structures, as in the experience of the authors, a significant proportion of the orphaned securitization vehicles should in fact already benefit from the standalone entity exception set out in the law.

Oliver R. Hoor is a Tax Partner (Head of Transfer Pricing and the German Desk) and Keith O’Donnell is the Managing Partner of ATOZ Tax Advisers (Taxand Luxembourg).

The authors wish to thank Marie Bentley (Knowledge Director) for her assistance.