Properties for sale on a residential street in southeast London. The U.K. government is considering further reforms to the 300-year-old tax on land transactions.
Photographer: Justin Tallis/AFP/Getty Images

Property tax has undergone significant change in recent years in the U.K. The government is thought to be considering further reforms, and investors in U.K. property need to be aware of the potential impact. Alpa Bhakta of Butterfield Mortgages Limited and Michael Flaherty of BDO take a look at the background to the tax and possible developments.

Upon being appointed as the U.K.’s Prime Minister and Chancellor, Boris Johnson and Sajid Javid both indicated that Stamp Duty Land Tax (SDLT) is one of the first taxes they are considering for reform. The pair are keen to review how changes can be made to the property tax in a bid to stimulate the market and help buyers—particularly first‐time buyers and families.

With approximately 870,000 house sales being completed in England and Wales in 2018 alone, Johnson and Javid’s focus on SDLT is understandable. Not only does it affect people across the country as they attempt to get on and move up the “property ladder”; the tax also has a significant impact on the government’s income and budget.

Exactly what shape the potential reforms will take remains unclear. So, too, is who will be impacted. However, in light of the importance of this tax and the implications of changes to it, this article explores the background to SDLT, its current position and possible future reforms.

Stamp duty was first introduced in 1694 as a form of taxation on a wide range of goods. Up to 2003, this was a tax on documents, which was fairly easily avoided for property purchases by “resting on contract.”

In 2003, SDLT—a tax on land transactions, payable by the buyer, which we today consider “stamp duty”—was introduced by the Finance Act 2003. In the intervening 16 years, SDLT has been constantly evolving, with regular changes to the tax making matters increasingly complex for those buying U.K. property.

Most pertinently, the method of calculating the amount payable on residential property purchases changed in December 2014, from a single percentage based on the total consideration, to a banded system with a different rate for the amount in each band. The main effects of this change were an end to the “cliff edge” disadvantage of the former system and an increase in the liability for properties costing over 1.125 million pounds ($1.39 million), mostly affecting properties in London and the southeast area of the U.K.

Investors—in particular, overseas investors—need to be aware that there are now actually three versions of stamp duty on properties in the U.K.: SDLT in England and Northern Ireland; Land and Buildings Transaction Tax (LBTT) in Scotland since April 2015; and Land Transaction Tax (LTT) in Wales since April 2018. The three versions operate in a broadly similar way, with separate rules for residential and commercial properties, but with different rate bands, rates and rules for particular types of transactions.

SDLT rates on residential property purchases have risen markedly in recent years, from a top rate of only 4% in 2003 to the current top rate of 15%. For high net-worth individuals (HNWIs) and overseas investors who are purchasing prime residential properties, therefore, it has become more important than ever that they understand the current state of play prior to considering an acquisition.

The tables below outline the current SDLT rates for property purchases in England and Northern Ireland: 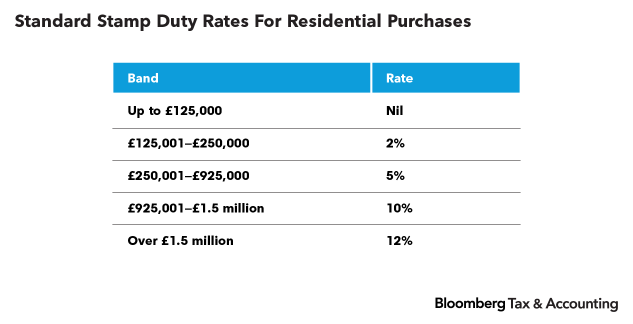 As well as the standard rates in the table above, surcharges can apply for certain purchases. This includes a 3% surcharge on purchases of second homes and most purchases of residential property by non‐natural persons.

Furthermore, a 15% rate applies for purchases of residential properties valued at over 500,000 pounds by corporate bodies, collective investment schemes and partnerships where at least one member is a company, although relief is available for certain qualifying purchasers including property developers, property trading businesses, and property rental businesses.

Transactions that form part of a single scheme, arrangement or series of transactions between the same vendor and purchaser or persons connected with them can be treated as linked, to prevent a large transaction being fragmented into a number of smaller transactions in order to obtain a lower rate of SDLT.

Relief is available for certain types of property purchases, including Multiple Dwellings Relief, which can reduce the rate of SDLT on the acquisition of interests in two or more dwellings in a single transaction or linked transactions.

With effect from March 1, 2019 the SDLT return filing and payment deadlines were reduced from 30 days to only 14 days.

The significant changes and increases in SDLT combined with Brexit have been cited as the main factors for the curtailing of the fast pace of price growth witnessed in the U.K. property market over recent years. This is particularly true in London.

The slowdown in activity within the property market, combined with the fact that SDLT revenues have also dropped (see below), could see the current Prime Minister Boris Johnson stimulate things further. As such, it is necessary for a careful inspection of how reforms to SDLT could galvanize real estate buyers and inject fresh impetus into this vital section of the U.K. economy.

We have made several references to the importance of property transactions to U.K. gross domestic product: it is worth putting that point into context.

The uncertainty emanating from Brexit has restricted activity in many financial markets, and this is evident in the property sector. Buyers and investors have adopted a “wait and see” mentality, which has caused transaction numbers—and SDLT receipts, therefore—to dip over the past 24 months.

So, how can we expect SDLT to evolve in the months and years ahead?

The significant extensions of the SDLT charge and rate increases in recent years have now slowed. However, the government is said to be considering the introduction of an SDLT surcharge of 1% on purchases of residential property in England and Northern Ireland by non‐U.K. resident buyers in a future Finance Bill.

We can also expect HM Revenue & Customs to take more action to combat perceived loopholes, including where a person acquires an interest in a property involving a number of transactions that result in a lower SDLT liability than would otherwise have applied.

Returning to Boris Johnson and Sajid Javid’s potential changes, reducing the top rate of SDLT from 12% to 7% and increasing the nil rate band threshold to 500,000 pounds would be a helpful start, with perhaps something more radical promised for future years. As such, the next Autumn Budget (snap or scheduled) should be watched closely by those with an interest in the U.K. property market.