Since value-added tax has been introduced in the United Arab Emirates some issues have been raised around its implementation. Ton van Doremalen and Wouter Kolkman of DLA Piper explore the current state of play for companies operating with agent structures.

Businesses operating with agent structures—not uncommon in the insurance or real estate sector—are (still) not fully certain about the scope and application of the agent VAT rules in the United Arab Emirates.

Recently, Bahrain and the Kingdom of Saudi Arabia (KSA) issued guidance on the identification and value-added tax (VAT) treatment of disclosed and undisclosed agents. By contrast, the guidance of the United Arab Emirates (UAE) on this subject is relatively limited.

This article explores the current state of play in the UAE based on these recently acquired insights.

Article 9 of the UAE VAT Law states with respect to supplies via agents:

“1. The Supply of Goods and Services through an agent acting in the name of and on behalf of a principal is considered to be a supply by the principal and for his benefit.

2. The Supply of Goods and Services through an agent acting in his name is considered to be a direct supply by the agent and for his benefit.”

Neither the UAE VAT Law nor its Executive Regulations provides a definition for “agent.” As no prescriptive guidance has been given in the Gulf Cooperation Council (GCC) Unified VAT Agreement in relation to what constitutes an agent, the analysis should be determined by UAE law. A definition can be found in the UAE Agency Law, which defines an agent as:

“A natural person holding the nationality of the state, or a juridical person owned fully by national natural persons, entering into contract of commercial agency for the representation of the principal in the distribution, sale, display or offer of a merchandise or service inside the state in return for a commission or profit.”

However, the Agency Law is not mentioned in the preamble to the VAT Law, and appears to be primarily focused on regulatory aspects of agent relationships. For example, the Agency Law requires the agent arrangement to be, inter alia:

For VAT purposes, there appear to be no such restrictions and/or requirements. Based on Article 9 of the VAT Law, an agent may be interpreted as anyone (also non-UAE nationals) who supplies goods or services on behalf of a principal, either as:

To date, the most notable appearance of the disclosed agent and undisclosed agent in UAE guidance can be found in the Insurance VAT Guide. The Guide, released by the Federal Tax Authority (FTA) in September 2018, contains the following paragraph:

“Where an insurance intermediary (i.e. an agent or broker) acts as a disclosed agent for an insurance transaction, the following supplies generally occur:

If the intermediary acts in its own name—that is as an undisclosed agent—then the above sequence simply becomes a series of supplies liable to VAT.”

This paragraph, while limited, does provide insight into the FTA’s position with respect to disclosed agent and undisclosed agent. Using additional guidance provided in Bahrain and the KSA, a more elaborate interpretation may be distilled.

The disclosed agent acts in the name of the principal, for example by advertising the principal’s goods to the customer or conducting other commercial activities that would facilitate the supply by the principal (to the customer). In the KSA, the General Authority of Zakat and Tax (GAZT) justifiably refers to this supply in its Agents Guideline (issued January 2019) as the underlying supply. The agent may separately invoice the principal for its agency services.

As a variant to this scenario, the agent may also act on behalf of the customer instead of the principal, in which case the customer would be invoiced for the agency services. 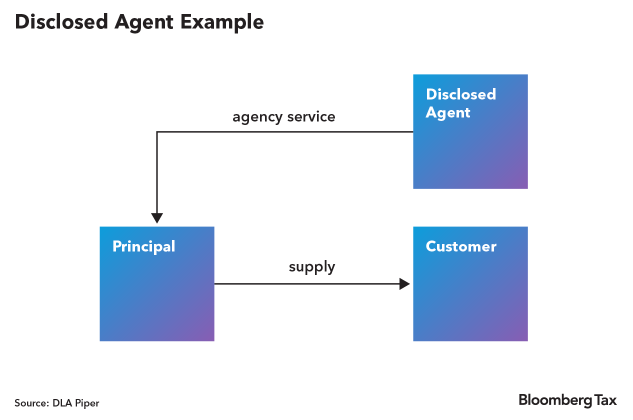 The latter characteristic should not interfere with the agent charging the principal a fee (a commission) calculated as a fixed amount or a percentage of the underlying supply.

With respect to the first characteristic, the principal and the customer should be aware of each other’s identity, and the documentation relating to the underlying supply should reflect this awareness.

While the disclosed agent may be the party issuing the invoice (i.e. third party billing), the invoice should still reflect the underlying supply. The invoice should therefore contain the various invoice requirements relating to the principal (as the supplier). Further, it is vital that no duplicate invoices are issued with respect to a single supply. If the agent issues an invoice on behalf of the principal, the principal should not issue its own tax invoice.

In the undisclosed agent scenario, the agent is acting in its own name. The distinguishing feature of this scenario is that the agent does not disclose its (agency) relationship with the principal. The customer may be led to believe that he is dealing with a principal (instead of an agent).

The VAT Law states that the supply is considered to be made through an agent. While the VAT Law does not specifically state that such supplies would be treated as made (by the principal) to the agent and by the agent to the customer, the wording “through” suggests that the same good/service would need to be supplied to the agent and subsequently by the undisclosed agent (to the customer).

This view is supported by the FTA’s Insurance Guide (the above sequence simply becomes a series of supplies liable to VAT) and would be in accordance with the views of the GAZT Agents Guidelineand Bahrain’s National Bureau for Revenue (NBR) VAT General Guide.

Further, the EU’s Principal VAT Directive similarly states that where an agent acting in its own name but on behalf of another person takes part in a supply of services, the agent shall be deemed to have received and supplied those services itself. It is noted that the Principal VAT Directive appears to have had a major influence on the structure of UAE VAT as well as on the other GCC VAT regimes. 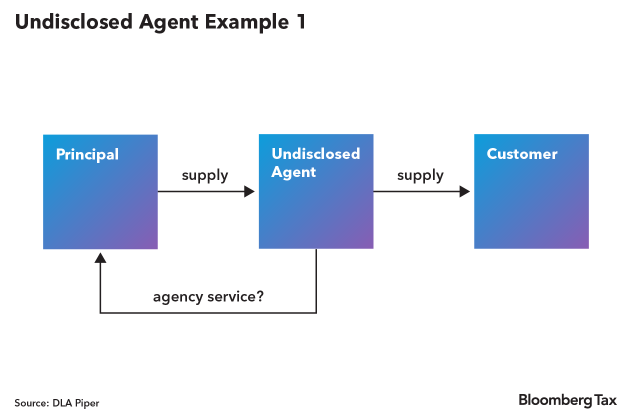 While the undisclosed agent may be considered to provide an agency service to the principal, in practice the agent would generally be remunerated for such service by applying a mark-up on its onward supply. The GAZT and the NBR both appear to have taken the position that the agent may not need to take into consideration an agency fee (as a separate element from making the underlying supply). In the example below, the 20 difference between the first supply and forward (second) supply represents the mark-up (or commission) of the undisclosed agent: 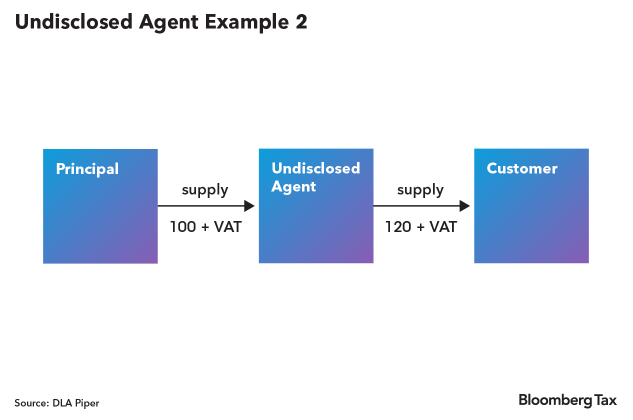 Both supplies should be individually analyzed for VAT. While in principle both supplies would follow the same VAT treatment (as it generally concerns the same underlying goods/services), there are circumstances where the VAT treatment of the forward (second) supply differs. For example, where the customer is located outside of the UAE, in which case the the first supply may constitute a domestic supply (5 percent VAT) and the forward supply an export (0 percent VAT).

Gray Area: Agent Acts as or is Considered as Principal?

Ideally, the contracts concluded between parties would indicate how the parties and the respective supplies between the parties should be treated for VAT.

However, as described, there are differences in what would constitute an agent (or a principal) for VAT purposes or for commercial purposes. Furthermore, parties may have an even broader definition of agent (i.e. referring to a principal as agent).

The FTA has clarified in its first VAT Public Clarification that for determining the correct VAT treatment:

Similarly, the GAZT indicates in the Agents Guideline that the “correct position should be based on an analysis of the agreements between the persons, and the commercial reality of the relationship between those persons, based on all of the relevant factors.” A similar analysis should be undertaken to ascertain the correct UAE VAT treatment.

The GAZT Agents Guideline has flagged distinct agency situations in four particular sectors as special cases. These special cases are:

Where a local land transportation business or mobile ride sourcing application arranges a trip for a passenger, the GAZT considers—under certain circumstances—such business or application (platform) to act as the principal. (With respect to land transportation, the GAZT has flagged three conditions, though it is still unclear whether these conditions are cumulative. See paragraph 9.2 of the Guideline.)

The driver, according to the GAZT, is a facilitator to the principal by providing transportation services.

It is unclear if the FTA will take a similar position in the UAE, or if it will consider the driver to be the principal and the land transportation business or mobile ride sourcing application as the agent. Under UAE VAT Law, local passenger transport services are exempt, which complicates the matter even further.

The Court of Justice of the European Union (CJEU) has repeatedly addressed this question for decades. The FTA has shown in various guides and clarifications that it does take notice of CJEU case law, even further improving on certain CJEU principles.

Luckily, the FTA has done a tremendous job so far by issuing numerous guides, public clarifications and pamphlets and it should only be a matter of time until the points raised in this article will also be further clarified.

Until then, businesses may rely on the FTA’s already issued guidance and, to a lesser extent, on the lessons learned/positions taken by tax authorities in neighboring GCC member states.

The FTA has shown in the past that it may take a pragmatic approach to uncertain areas of VAT application in favor of establishing a lasting and mutually beneficial relationship with its taxpayers.

Wouter Kolkman
DLA Piper
INSIGHT: VAT in the GCC—Three Months On
© 2022 The Bureau of National Affairs, Inc.
All Rights Reserved