The Internal Revenue Service released in March 2021 a databank on the Form 8975, Country-by-Country Report (CbCR) that has been filed by 1,641 U.S. corporations. The databank provides for the first time a full guide to where multinationals book profits and pay taxes. Glenn DeSouza of Dentons analyzes this treasure trove of information for insights into two of the most important international tax questions: (1) what is the effective tax rate (ETR) of U.S. companies, and (2) how much profit are U.S. companies booking in tax havens versus base economies. The author also discusses the continuing decline in the contribution of corporate income tax to the federal treasury and what this portends.

While, one would expect that the major economies, such as China and Germany, where US companies do business, would be the places which are most profitable this is abundantly not the case. China receives just 3% of the total foreign profits booked by US corporations and Germany receives only 1%. By contrast, 65% of US firms foreign profits are in low-tax jurisdictions, such as Ireland and Singapore, tax-havens like Bermuda, or in stateless entities.

In 2016, and in accordance with the OECD Base Erosion and Profit Shifting (BEPS) project,, the IRS issued final regulations whereby U.S. multinational enterprise (MNE) groups with $850 million or more of revenue must file IRS Form 8975, Country-by-Country Report (CbCR) and disclose the following information on each jurisdiction where they operate:

The core statistics from the IRS are presented in the next exhibit. It shows in aggregate form key information such as revenues, profits, taxes paid, employees, assets, and so on. It can be seen that U.S. companies are heavily globalized with 57% of total profits booked in the U.S. and 43% of the profits booked in foreign jurisdictions. 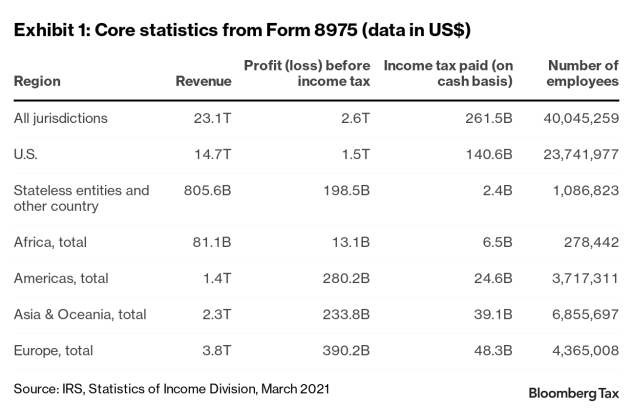 From the IRS databank, we can calculate a statistic of enormous importance, a key performance indicator, namely the ETR. The results as shown below are quite surprising. The ETR of U.S. multinationals averages just 10%; which is lower than guestimates that have been floated in the past. 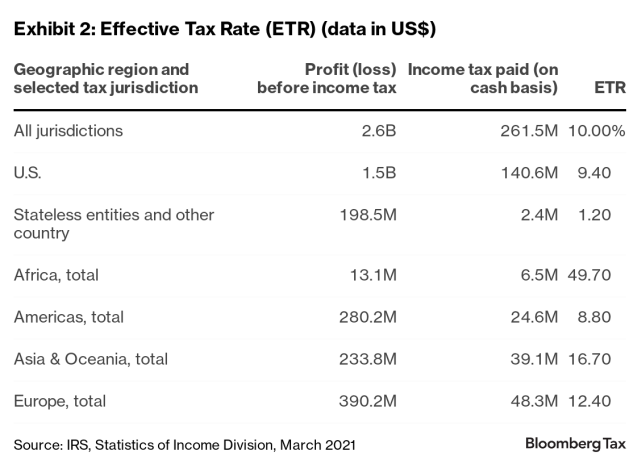 U.S. MNEs place profits where the tax rate is lowest

The low ETR is achieved in part because U.S. multinationals pay tax on larger shares of their foreign income in countries where the effective tax rate for them is lower. For example, China has 1.3 million employees but only captures 3% of the total foreign profits, while Singapore has significantly fewer people but gets 7.5% of the total foreign profits. Even more extreme is that the three tax havens of Bermuda, British Virgin Islands, and Caymans collectively capture 13.5% of the total foreign profits. Given that China is not only the “factory of the world” but also the “largest market in the world” this violates the fundamental principle laid out by the OECD in BEPS that “profits should be reported where economic activities take place.”

One of the interesting patterns in the CbCR filings is the gap between the statutory and effective tax rates. The ETR on the U.S. is just 9% versus the statutory rate is 21%. This matches up with a study done by a left-leaning think-thank, The Institute on Taxation and Economic Policy, which found that almost 100 profitable Fortune 500 companies, including Amazon, General Motors, and Salesforce.com, paid no U.S. corporate tax in 2018. 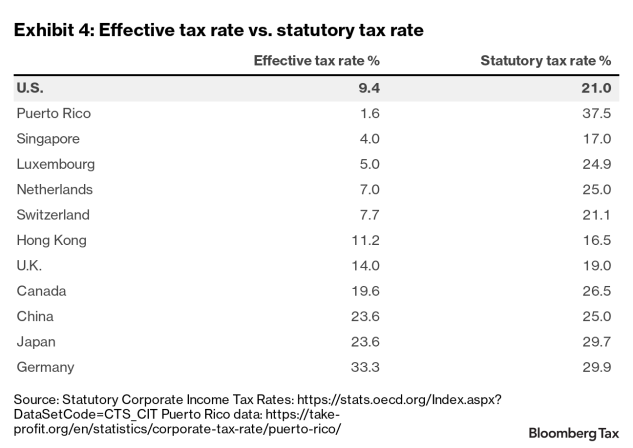 The CbCR will be exchanged under bilateral Competent Authority Arrangements (CAAs) negotiated between the U.S. Competent Authority and foreign tax administrations. The IRS will exchange Form 8975 information automatically with tax authorities with which the U.S. enters into a bilateral CAA. However, a U.S. MNE group’s information will be exchanged only with countries in which the U.S. MNE group reports doing business. Exchanged information is confidential and protected pursuant to the applicable legal instrument permitting exchange.

China does not have an agreement to exchange tax information with the U.S. However, during tax and transfer pricing audits, the China State Tax Administration (STA) has the authority to require the MNE under audit to provide information on this type of information.

Corporate tax contributions are at a historic low of 7%

Companies are paying a very small amount to the federal treasury when compared to the contribution of individuals. In 2019, according to a research institute, the Tax Foundation, corporate income tax provided just 7% of federal revenue. In the meantime, the share of federal revenue accounted for by individual income tax and payroll taxes equaled 86%. Individuals contribute basically 12 dollars for every 1 dollar from corporations.

Exhibit 5: 2019 Share of Corporate vs. Personal in Federal Revenues 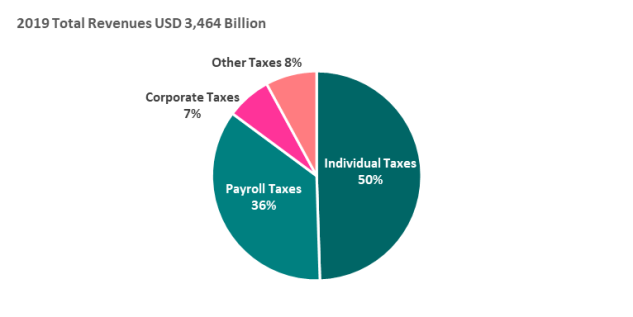 Back in the immediate post-war era, corporations contributed far more. The creation of the federal corporate income tax occurred in 1909, when the uniform rate was just 1%. But then the rate increased to as high as 52.8% in 1969. Since 1993, the corporate rate stood at 35% until the 2017 Tax Cuts and Jobs Act slashed the corporate tax rate to 21% from 35%.

As a result of the reduced corporate rate, and the use of aggressive and professionalized tax planning, the contribution of corporate tax to federal revenue has dropped by two-thirds in 60 years—from 32% in 1952 to 10% in 2013, and now down to 7%.

How well are U.S. companies complying with BEPS?

The most important development in international tax is BEPS which has the objective of pushing MNES to place profits where economic activity takes place. The Form 8975 databank provides insight into how well U.S. companies are complying with BEPS. To put it bluntly, compliance is weak. As mentioned earlier, 43% of total profits of U.S. MNEs is booked in foreign jurisdictions. Of that 43% we did a further analysis of where it was reported. Foreign jurisdictions were classified as (1) stateless, (2) tax havens such as Bermuda, (3) tax-favored jurisdictions such as Singapore, and (4) base economies such as China, Japan, and Germany where economic activity takes place.

The IRS data were analyzed and the results are quite remarkable. Only 35% of the U.S. MNEs’ total international profits are booked in base economies and the remaining 18% is placed in stateless entities, 20% in tax havens, and 27% in tax-favored jurisdictions. 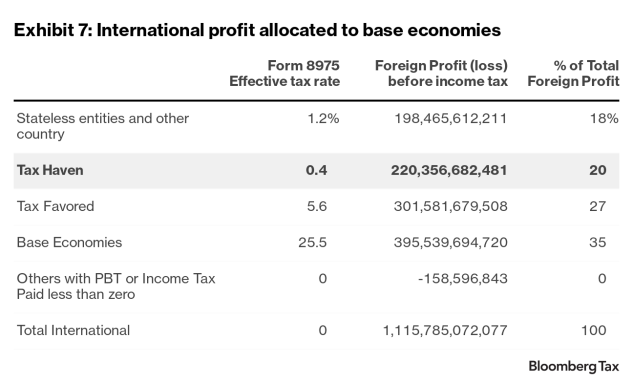 The future of tax havens

The trend away from tax havens was surprisingly accelerated by President Trump when signed the Tax Cuts and Jobs Act (TCJA). The TCJA took a bulls-eye aim at tax havens by introducing Global intangible low-taxed income (GILTI), which in effect places a 10.5% to 13.125% rate on tax-haven profits but allows global pooling. This caused a number of companies to onshore the IP back stateside.

The GILTI impact may be intensified under the Biden plan, which would raise the GILTI rate to 21% and would not allow global pooling. It would thus apply on a jurisdiction-specific basis, and be even more punitive on profits in tax havens.

The corporate contributions to the federal treasury have been declining from the 32% that prevailed in 1950 to just 7% currently. We also see that the ETR of U.S. MNEs is just 10% with many profitable companies, notably Amazon, having years where no taxes were paid in the U.S.

Although the IRS Subpart F regime was supposed to punish the use of passive income booked in tax havens, it has proved absurdly ineffective. Sixty-five percent of foreign profits, according to the IRS data released in March 2021 from the filings of Form 8975, Country-by-Country Report (CbCR), are booked in tax havens such as Bermuda or tax-favored jurisdictions like Singapore.

The tide may finally be changing. A combination of the proposed GloBE rules and the proposed Biden GILTI regime will remove the benefits of enjoying a low-tax regime. In fact, we already see companies becoming more conservative and bringing IP back to the U.S. Although their taxes will go up, MNEs will at least reduce their audit risk and have the IRS in their corner in the event of an audit.

Glenn DeSouza is a Senior Partner and National Transfer Pricing Leader at Dentons Shanghai office. Glenn can be reached at glenn.desouza@dentons.cn