Choupette, the pampered Birman cat of late fashion designer Karl Lagerfeld, won’t directly be getting her furry paws on his fortune.

But France will. Maybe Germany and the U.S., too.

The will of the former Chanel and Fendi creative director, who died last week in France at age 85, is confidential under German and French law. But it has been widely speculated that the German designer left a fraction of his $200 million estate to his darling cat.

Lagerfeld has previously said he would set aside some of his estate for Choupette, according to interviews in French magazines Numero and Le Figaro.

When asked if he’d leave his fortune to the cat, Lagerfeld said: “Among others, yes. Don’t worry, there is enough for everyone.”

But there are various vehicles that can be set up in wills to provide for an animal’s care, and France’s taxes on those—and on any individual benefiting from Lagerfeld’s wealth—can run as high as 60 percent.

“The tax situation can be a real headache,” Schmeilzl said. 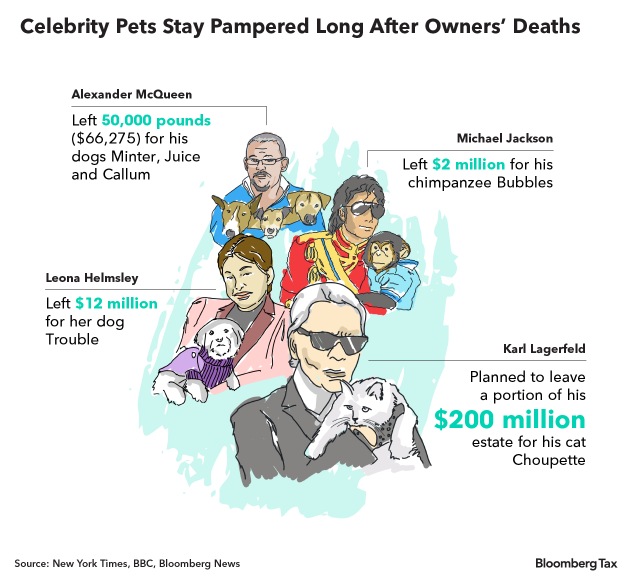 This isn’t the first time a celebrity has left money behind for the care and well-being of a pet. Singer Michael Jackson reportedly left $2 million for the care of his cherished chimpanzee Bubbles. Hotelier Leona Helmsley left $12 million for her precious pooch Trouble. Fashion designer Alexander McQueen left 50,000 pounds ($66,275) to his three dogs, and tobacco heiress Doris Duke left $100,000 for her four dogs.

Helmsley and Duke both left their money in trust funds for their treasured animals.

Chanel didn’t immediately respond to a request for comment.

Lagerfeld could have passed his money to Choupette in two ways: he could have appointed a designated caretaker for the fluffy feline, or he could have set up a legal entity, like a trust or non-charitable foundation, to look after her. If Choupette died, the legal entity would dissolve and any remaining balance would either go to another designated beneficiary or to charity.

“An animal cannot inherit anything. You can only instruct other people what to do with that animal and pay for that in advance,” Schmeilzl said.

No matter where the money goes, France would get its share because that’s where Lagerfeld and his cat primarily lived. Germany and the U.S. could possibly reap benefits, too. And complications could arise as portions are doled out to other stakeholders, like Lagerfeld’s American godson Hudson Kroenig.

Unlike the U.S., which taxes the total net value of an estate, France taxes each individual heir. Moreover, the French tax rate differs based on the relationship of the beneficiary to the decedent. The further away heirs are from the decedent’s direct family, the more tax they owe.

Choupette’s caretaker and Kroenig could be hit with as much as 60 percent in French taxes, Parker said. Even funds for a trust set up for Choupette in a different jurisdiction would be taxed at 60 percent, she said.

French law isn’t friendly toward trusts because they’re seen as vehicles for tax evasion, so Lagerfeld would have been better off setting up a trust somewhere else, like in the U.S., where most traditional trusts are used for estate-planning purposes, Parker said.

“I’m sure Karl would have been very careful to pick a jurisdiction for his trust because he was so attached to Choupette,” she said.

If Lagerfeld left any money behind for Kroenig, that inheritance would be tax-free from a U.S. perspective. But any U.S. property left to him or anyone else would be taxed.

Under German law, both assets in the country and money given to someone living in the country are taxed. There might be even more countries involved, practitioners said.

“It’s one of the most complicated situations you can have with a person,” said Jeffrey Eisen, a partner at Mitchell Silberberg & Knupp LLP in Los Angeles. Lagerfeld “probably had more than one residence in various countries and assets in various countries.”