Above: The national flag of Luxembourg flies in the city of Luxembourg
Photographer: Wolfgang von Brauchitsch/Bloomberg News

Oliver R. Hoor and Romain Tiffon of ATOZ Tax Advisers consider the requirements for compliance with reporting obligations since the introduction of the mandatory disclosure regime in Luxembourg, and discuss what issues tax advisers and taxpayers need to be aware of when preparing for scrutiny by the tax authorities.

Under the mandatory disclosure regime (MDR) introduced in Luxembourg by the law of March 25, 2020 (the MDR Law), tax intermediaries such as tax advisers, accountants, and lawyers that design, promote or provide assistance in regard to certain cross-border arrangements have to report these to the tax authorities.

Since the implementation of the MDR, the scrutiny of potential reporting obligations has become an integral part of every tax analysis. The proper management of potential reporting obligations under the MDR requires both tax intermediaries and taxpayers to adopt appropriate processes in order to ensure compliance and to mitigate the risk of penalties, which can amount to as much as 250,000 euros ($284,000).

More recently, the Luxembourg tax authorities began investigating the MDR readiness of, and processes implemented by, tax intermediaries. It can be expected that this will become a more common phenomenon and both tax intermediaries and taxpayers need to be prepared to evidence that they comply with the MDR.

Mandatory Disclosure Regime in a Nutshell

The MDR operates through a system of hallmarks that may trigger reporting obligations and the “main benefit test” that functions as a threshold requirement for many of these hallmarks. As such, the main benefit test should filter out irrelevant reporting and enhance the usefulness of the information collected because the focus will be on arrangements that have a higher probability of truly presenting a risk of tax avoidance.

When determining whether advice on a particular arrangement is reportable under the MDR, it is first necessary to analyze whether the arrangement has a cross-border dimension; this would be the case when an arrangement concerns either more than one EU member state or an EU member state and a third country.

When at least one of the hallmarks is fulfilled, it has to be determined whether the hallmark is subject to the main benefit test. If this is not the case, there is an automatic reporting obligation under the MDR.

The analysis to be performed is depicted in the checklist below. 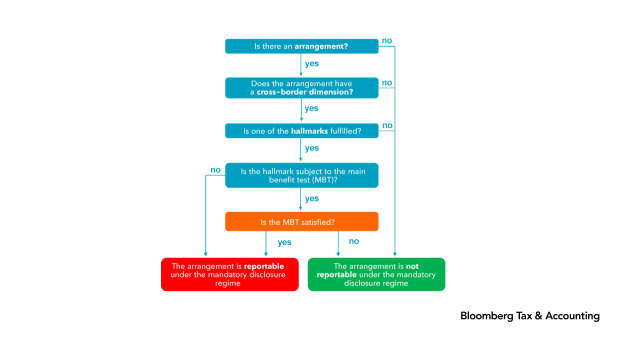 Intermediaries should only be exempt from their reporting obligations to the extent they can prove that the same arrangement has already been reported by another intermediary. In addition, Luxembourg tax intermediaries are exempt from reporting if they can demonstrate that the same cross-border arrangement has already been reported in another EU member state.

This obviously requires a certain degree of coordination between advisers in order to determine whether or not a cross-border arrangement is reportable and, if so, to ensure that only one intermediary files a report, to avoid multiple filings in relation to the same arrangement. This is even more relevant since on filing an arrangement with a local tax authority, a unique ID number will be issued and assigned to the reported arrangement.

If multiple reportings are made without indicating this unique arrangement ID number, the multi-reporting of the same arrangement will effectively cause it to be considered as multiple arrangements.

When there is no tax intermediary because, for instance, the taxpayer designs and implements a scheme in-house, the reporting obligation rests with the taxpayer who benefits from the arrangement.

How to Manage (Potential) Reporting Obligations in Practice

Tax intermediaries and taxpayers should have implemented an appropriate process to ensure compliance with reporting obligations under the MDR. However, there is no one-size-fits-all approach to MDR readiness.

Given that there will likely be overlapping reporting obligations in Luxembourg and abroad, the coordination between tax intermediaries and the taxpayer is of utmost importance. The need for coordination is further increased by the short reporting deadlines. When a cross-border arrangement is reportable under the MDR, reporting must be made within a period of 30 days starting from different trigger events.

Accordingly, it is important to adopt an MDR process that is systematically followed.

In the case of tax intermediaries that deal with a significant number of cross-border arrangements on a regular basis, it might be appropriate to prepare an MDR policy that details the process and responsibilities, and provides guidelines for the interpretation of terms and concepts under the MDR, in order to ensure consistency across the entire organization and possibly a common approach to specific matters by the intermediaries involved, which also involves the training of staff.

The analysis of potential reporting obligations should be properly documented so that all parties involved may evidence compliance with the MDR and the reasoning for reporting or non-reporting.

In light of these complexities, the use of an IT solution may simplify and streamline the management of reporting obligations under the MDR.

Under the MDR, tax intermediaries may have to report certain cross-border arrangements to the tax authorities that meet at least one of the hallmarks defined in the appendix to the MDR Law.

Many of the hallmarks set out in the appendix to the MDR Law are subject to the main benefit test that functions as an additional threshold requirement in order to filter out irrelevant disclosure and to reduce some of the compliance and administration burden of the disclosure regime by targeting only tax-motivated transactions.

Tax intermediaries and taxpayers have to implement an appropriate process in order to ensure compliance with the MDR. The Luxembourg tax authorities have recently begun investigating the MDR readiness and compliance of tax intermediaries.

Ultimately, this might be the right moment to reflect on whether the measures taken are appropriate to ensure compliance with the MDR and consider improvements where necessary. Here, IT solutions may play a significant role and can facilitate the handling of this process, which in the field of asset management is becoming more an investor relations matter than a pure compliance one.

The authors wish to thank Samantha Schmitz (Chief Knowledge Officer) for her assistance.