New York City’s move to tax far more of corporations’ offshore income than the state could cost companies such as and millions of dollars a year, prompting consternation from business groups.

The new treatments are tied to the 2017 federal tax overhaul that created a new levy on global intangible low-taxed income. GILTI was intended to stifle multinationals, like technology and pharmaceutical companies, from shifting profits offshore through intangible assets such as valuable intellectual properties.

Business groups are upset because the city is requiring companies to include the full amount of GILTI income in calculating their city taxes, even though New York state has adopted a 95 percent exemption on that income. Businesses want the city to mirror the state’s exemption, lobbyists told Bloomberg Tax. But that change can’t happen until 2020 when Albany’s legislature resumes.

“It’s always confusing when the city makes a different law than the state. We think that the city should model the state for a number of good reasons, but they’re on a different wavelength,” said Mark Jaffe, president and chief executive officer of the Greater New York Chamber of Commerce.

In New York City, the treatment applies to any company with GILTI that has to file a city return because it does business and generates income there. It’s a big deal for multinationals because their GILTI liabilities can be in the billions, said Leah Robinson, a partner at Mayer Brown in New York who leads the firm’s state and local tax group.

“It’s a big issue for New York companies with a significant foreign presence,” said Ken Pokalsky, vice president of the Business Council of New York State Inc. “We’re glad that we could control it at the state level, and we’re going to continue to advocate for the exemption at the city level as well.”

New York City wants to see the GILTI tax’s impact on corporations for 2018 tax returns that are due this fall before scaling back its position, said Kathryn S. Wylde, president and chief executive officer of Partnership for New York City. The nonprofit business organization has lobbied on GILTI issues at the state and city levels for its members, which include Pfizer, and.

“They’re looking to see if they’re giving up anything, and if so how much. Honestly no one knows,” Wylde said.

Multinational companies can ask for an administrative review of their tax cases if New York City’s GILTI treatment distorts any economic realities, Harry Leonard, deputy commissioner of the New York City Department of Finance, said July 24 at the New York University State and Local Tax Forum, according to Tax Notes.

“New York City is home to some of the largest U.S. multinational corporations and we have to make sure they pay their fair share in taxes,” said Aziza Taylor, a spokeswoman for the department.

Pfizer referred a request for comment to the Partnership for New York City. Goldman Sachs declined to comment. 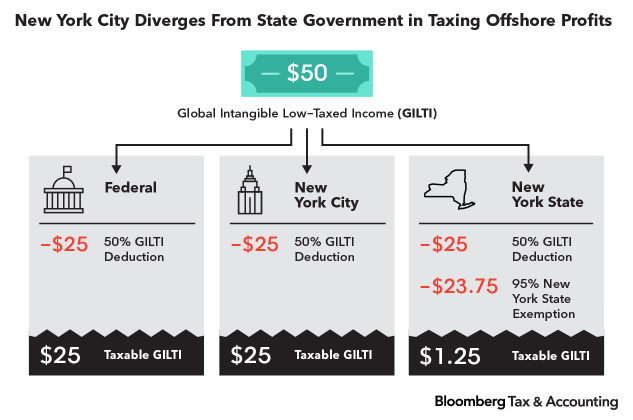 States often conform their laws to the federal tax code to adjust to changing tax bases, boost revenue, or remain competitive. But New York City is an outlier in also requiring all GILTI income to be reported for local tax purposes, which raises the question of whether it is treating foreign income differently than domestic income.

The state legislature can amend New York City’s tax rules though it’s chosen not to so far, practitioners and lobbyists said.

“It is a compliance headache,” Wylde said. “We have worked over the past decade to try to conform the city and state corporate tax treatment. Dual filings and dual audits are difficult and expensive for companies. Companies will see the city’s position as a step backward.”

New York signed legislation in June requiring companies to include only 5% of GILTI in their state tax calculations.
“We were able to make the case that the competitiveness for the state for attracting and keeping its headquarter companies really requires that they understood the GILTI provision costs the state nothing. It’s not a tax position that they’ve ever had,” Wylde said.

The state law will apply to tax returns for 2019 and beyond, so companies will likely see larger tax bills in both the state and city for 2018.

Until next year, multinational companies are stuck with the city’s current tax treatment of GILTI.

“It’s one of these things where we’re all scratching our heads a bit. It seems very revenue driven to be blunt,” said tax counsel at Skadden, Arps, Slate, Meagher, and Flom LLP in Washington.

“If that’s the case, one has to wonder if there’s an easier way to raise revenue for the city than having this difference in a significant tax item,” Erdmann continued. He advises on state and local tax planning and controversy.

Mayer Brown’s Robinson said New York City seems to be focusing on what sounds like good tax policy rather than thinking about economic development.