Peru’s President said the government is readying proposals to adjust tax legislation as it grapples with the coronavirus pandemic, signaling the wealthy may need to pay more into state coffers.

The government plans to ask Congress for permission to change laws in the area of taxation and finance, Vizcarra said in a news conference Thursday. While he didn’t give any details, he said it’s important that “those that have most show solidarity with those that have least.”

Obtaining delegated legislative powers from Congress would allow the government to fast-track changes by avoiding a lengthy process of debates and voting in Congress. “There’s no time to lose,” Vizcarra said.

Increasing taxes on the wealthy would likely be welcomed by many Peruvians. A majority of the population works in the informal economy and don’t pay income tax, and many have no earnings as a result of containment measures to stem the virus epidemic. 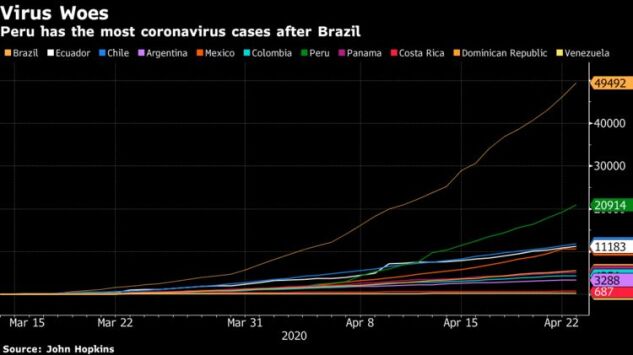 “Taxes are an appropriate measure at a time of crisis,” said Finance Minister the same event, when asked whether the government was considering a tax on the wealthy. The government is evaluating measures “inspired by the principle of solidarity,” she said.

“We’re very responsible with all that we propose, following international standards, following constitutional reasonableness,” she added.

Vizcarra’s government is looking for ways to cover a budget deficit that some analysts say may exceed 10% of gross domestic product this year as tax revenue drops and the economy contracts for the first time in decades.

The country sold a record $3 billion of dollar bonds last week and is tapping a war chest of reserves to finance fiscal stimulus.

Vizcarra said the government will extend a cash handout program to cover three quarters of all homes after extending containment measures for a third time since March 15.

The government will spend 5.2 billion soles ($1.5 billion) on cash payments to 6.8 million households, with each receiving 760 soles. It’s taken more than a month to distribute 1 billion soles to the poorest 3.5 million families, which is too long, he said.

He blamed bureaucratic delays and the fact that more than half the country’s households don’t have a bank account.

“We have to be faster. Hunger doesn’t wait,” he said.

The virus has killed 572 in the country and infected more than 20,000, the highest tally in South America after Brazil.

To contact the reporter on this story:
in Lima at jquigley8@bloomberg.net

To contact the editors responsible for this story:
at jspinetto@bloomberg.net