Tax authorities in several countries are trying to capture a slice of the multibillion-dollar influencer marketing industry but are finding it tricky to track the money trail.
Illustration: Jonathan Hurtarte/Bloomberg

On a September day in Marrakesh, Morocco, with the heat peaking at 108 degrees Fahrenheit, more than 100 powerful individuals wielding the ability to influence spending of thousands of people arrived at Arabesque hotels with rates as high as $1,000 per night.

They rode through the desert on pompom-adorned camels. Makeup artists pampered them with products that most people couldn’t yet buy. One day culminated with an “Arabian Nights"-themed candlelit dinner of small plates, washed down with pastel-colored cocktails, under an outdoor tent decorated with roses and pillows in the shades of Clinique’s orange, pink, and red. Fire performers twirled their flaming sticks and Moroccan dancers carried large silver trays on their heads with transparent teapots filled with lipsticks.

The influencers captivated their thousands of followers on blogs and social-media platforms such as Instagram and YouTube with images of themselves in front of intricate blue- and green-tiled pillars, sharing their dream adventures and showcasing the products and services presented there.

It isn’t clear if anyone pays taxes on freebies like these.

Denmark, South Korea, and Australia are among countries now trying to capture slices of an influencer marketing industry that, according to a 2018 study from MediaKix, is expected to reach between $5 billion and $10 billion by 2020. But tracking who gives out the free items, who gets them and on what terms, and how much it’s all worth is proving to be elusive.

The practice of “payola,” using someone’s influence to promote an interest, isn’t new, but the influencer industry is a digital-age twist on how it might be done and how much of it is going on.

Most efforts at taxing the freebies are directed at the influencers. Still, some influencers say they’d gladly lay out everything to tax authorities but don’t know how, or fear losing business relationships essential to building their platforms. That’s partly because the brands that send them free products and services deny that the gifts are anything but an act of kindness—or they disappear when provoked.

Larger corporations—from Clinique parent Estee Lauder Companies Inc. and clothing retail company Hennes & Mauritz AB to Delta Air Lines Inc. and McDonald’s Corp.—tend to work through networks such as Hello Society, Octoly, and Activate that connect brands and influencers. Brands tend to work most often with influencers who have between 5,000 and 100,000 followers on their key social channels, a 2019 study from Activate said.

Kamiu Lee, chief executive officer of Activate, said she’s had conversations with brands about the difference between sponsored partnerships involving cash and giving a product or service with no explicit agreement or contract. The latter scenario offers no guarantee that an influencer will post something in return, so the “free” item isn’t considered taxable income, Lee said.

“Often times, if you are not actually being financially paid, you’re not able to pay your bills and run your business. That’s not income. Getting a ton of free lipstick or a ton of boxes and boxes of shoes is not the same thing,” Lee said.

The multinational corporations are ultimately spending their dollars on these items and someone has to account for it, said Sara F. Hawkins, an attorney in Phoenix, Ariz. She represents both brands and social media influencers.

“You have to kind of play the domino game along the way. At some point in time, when the IRS asks for their money, everybody can’t point the finger at somebody else,” Hawkins said.

Multinational corporations could book the freebies they give out as marketing or other business expenses. If an item is a legitimate gift, the company can only deduct up to $25 from its tax bill. The rest of the tax liability depends on the way the brand categorizes its expenses for influencer partnerships—from hotel and travel costs to food, products, and services.

“The non-monetary stuff is tricky,” Hawkins said. “It depends on how the business handles it. Two nearly exact businesses with the same income, with the same expenses, could potentially end up with different liabilities based on how they manage these numbers.”

Not Black and White 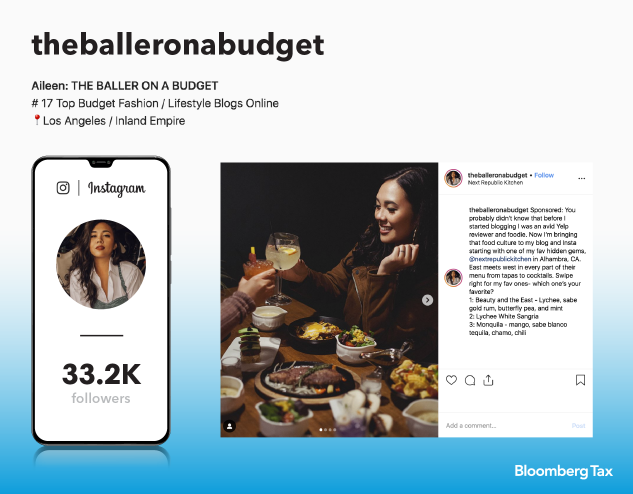 Authorities typically say that a gift is taxable when it’s given in exchange for something. A gift can be a tax-free transfer if it’s given “out of detached and disinterested generosity,” an Internal Revenue Service spokesperson said.

That makes the intent behind the gift critical.

“Businesses don’t send product to people called ‘influencers’ just because they want somebody to have a product,” Hawkins said. “They send product for access to services that influencers have because those people may provide value to them. They will do something with this.”

Of course, lipstick doesn’t pay the bills, even if an influencer keeps it.

“The mortgage company does not take your makeup,” she said. “You can have literally millions of dollars of toys at your house and you can’t package it up to the IRS and say, ‘This is $7,700 worth of toys.’ You better sell it on Ebay.”

About 69% of more than 800 global social media influencers said they get free products or services in exchange for participating in influencer campaigns, according to a 2018 study conducted by Activate. And more than 58% of marketers cited in Activate’s 2019 study said influencers turned down partnerships because of disagreements over the way they were paid.

In the U.S., a brand is expected to give an influencer a Form 1099 for their tax returns. The brand will then get a Form W-9 in return when a cash transaction is involved. The gray area begins when influencers get a free product or service in exchange for something, said Aileen Luib, an LA-based fashion and beauty influencer who has more than 33,000 Instagram followers and a blog, The Baller on a Budget.

“From what I’ve learned and witnessed, many people in the influencer space don’t report income unless the brand gives them a 1099 to file,” Luib said. “Half the problem is that brands don’t report the income while the other half is that influencers blindly trust brands.”

Luib said she’s had companies give her free items in exchange for brand endorsements. Yet, a brand might not hand over the appropriate tax forms, even when asked. Sometimes, she said, she’s simply ghosted.

“I have been gifted a neon lamp which might be worth 2,000 kroner,” said Ester Rose Wadsworth, a Copenhagen-based American who has 22,000 Instagram followers. “Often, the basis for this is a casual, ‘Come by and get this.’ I don’t know how you would register something like that, or if it would be necessary to.”

Brands are required to hand over Form 1099s when a transaction involves more than $600, Hawkins said. But even if they don’t, the influencer is responsible for reporting that income.

It’s investigating 176 individuals across YouTube and other emerging technology platforms. The investigation, launched on Dec. 12, 2018, has confirmed 15 tax evasion cases so far. An undisclosed YouTuber with about 10 million subscribers who earned 2 billion won ($1.69 million) in profits was found guilty, Seul Lee, an officer at the National Tax Service in Korea, said.

The investigations came after the NTS “realized that YouTubers are working in an emerging industry with many ‘blind spots’ that could allow them to commit tax evasion,” Lee told Bloomberg Tax May 9.

The South Korean government is considering requiring Google and other foreign companies to report how much they’re paying YouTubers. Google didn’t respond to requests for comment.

Denmark’s Tax Law Council is looking later this year to recommend a tax break that would reward influencers and others with non-traditional income streams for fully reporting their income.

The new model could include a standard deduction for business expenses, either as a fixed annual amount or a percentage of earnings, rather than committing international companies to truthfully report gifts or fees, said Bo Sandemann Rasmussen, a member of the Tax Law Council, which advises the Ministry of Taxation.

But the Danish general election in June has put the Tax Council’s work on hold, said Rasmussen, who is also a professor at Aarhus University’s Department of Economics and Business. The council could be dissolved altogether depending on the new government, he said May 9 in an email to Bloomberg Tax.

‘Fame or Image’ in Australia

The Australian Taxation Office in 2018 announced a measure to tax all kinds of payment—including non-cash—that have been provided for the commercial use of an individual’s “fame or image.” The measure was supposed to take affect July 1, but legislation wasn’t introduced into the Australian parliament in time before elections for the new parliament.

In the meantime, the agency says it is using data analysis models to find discrepancies between tax returns and third-party data. It also uses the models to see whether an individual’s lifestyle can be supported by the reported income, an agency spokesperson said.

The agency will detect omitted income by manually reviewing the web or scraping social media platforms, the spokesperson said. 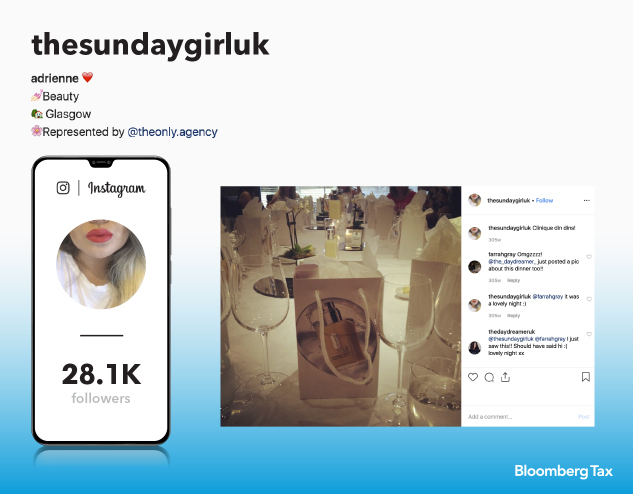 The IRS pointed to broad publications for guidance on a range of topics, including business expenses, different kinds of taxable income, such as bartering, and starting a business and keeping good records. A spokesperson said IRS actions on managing individuals akin to social media influencers include education, communication, and enforcement.

The U.K. is using “digital tools and intelligence sources” to find people who aren’t reporting their tax liabilities correctly, a spokesperson for Her Majesty’s Revenue and Customs said. The agency “has a number of strategies to help people comply with their obligations, including targeted guidance and support,” the spokesperson said. HMRC didn’t provide any details.

Adrienne Sondag, a U.K.-based influencer who runs the beauty blog, The Sunday Girl, said the U.K. tax authority could dedicate a section of its website with solid rules and guidelines for influencers.

“It’s not that people don’t understand that once they are making an income via their site and social media channels that it is taxable, it is more a case of, ‘how?” said Sondag, who has about 28,000 followers on Instagram and more than 22,000 on Twitter.

Wadsworth said she might begin to say no to sponsored items if it means that she’ll be taxed on gifts she wouldn’t have bought.

Luib said she’s gone to several tax preparers who weren’t able to give her consistent answers on the kinds of income she should report and what she could write off.

“Doing the whole tax thing was a hassle on my own,” she said. “I still have anxiety that I’m missing something and I might get in trouble for it, which is really unfair.”

—With assistance from Kelly Kasulis in Korea and Michael Barrett in Denmark.