The Covid-19 pandemic has given a shock to the global economy and governments will need to respond. Above; a traveler passes a sign for a Covid-19 testing center at London Heathrow Airport in London, U.K., on Monday, Jan. 18, 2021
Photographer: Simon Dawson/Bloomberg

Professor Jack M. Mintz of the University of Calgary considers how governments around the world will address the rising public debt levels caused by the Covid-19 pandemic, and how tax policies may evolve to encourage economic recovery.

The Covid-19-induced recessions have led to rising public debt obligations for virtually every country. The International Monetary Fund (IMF), in its October 2020 Fiscal Monitor, projected the average of all government deficits in 2020 to be 14.4% of gross domestic product (GDP) for advanced countries, 10.7% for emerging and middle-income countries, and 6.2% for low-income developing economies.

With financially stressed governments, many are predicting rising future tax levels. However, such forecasts raise several questions. First, how will the economy evolve during the pandemic period—which could last beyond 2021—and post-Covid-19 recovery period? Second, given the employment and income losses currently experienced, how will fiscal issues mesh with recovery objectives? Third, how will fiscal sustainability affect taxation levels? And fourth, how will the pandemic recession affect tax policy in the recovery periods?

The Covid-19 recession was a supply shock with an uneven impact on recovery. Based on the January 2021 IMF projected growth rates per region for 2020, the Euro Area economies (-7.2% GDP growth rate) are affected more heavily than the U.S. (-3.4%). China will be least affected (2.3%), performing better than emerging and middle-income (-2.4%) and developing low-income nations (-0.8%). In many countries, low-skilled workers incur higher employment losses than high-skilled workers. Women have been impacted more heavily in job losses in service sectors, in part because children had to stay at home, while many men have lost jobs in goods industries such as construction, mining, manufacturing and oil and gas.

The shift to online services and processes will result in growing technology sectors and digitization of businesses. Some sectors like health services and finance will return to their strength, albeit impacted by technology improvements. Some sectors like business travel and entertainment may be impacted for years to come, and other businesses might not even come back, depending on how consumer tastes change.

If countries shorten supply chains to reduce dependency on other countries for some goods and services, trade-oriented countries may be more impacted. The shift toward low-carbon energy will result in the use of alternative energy technologies but with unknown impacts on economic growth.

The lockdowns led to sharp employment income losses and business bankruptcies. To bridge the lockdown periods, governments have taken extraordinary steps to support their economies via deferrals, temporary spending and central bank credit programs, since these can be targeted at the unemployed and affected businesses. Tax deferrals have been broadly used, while many countries provided some temporary income or consumption tax relief.

When such tax relief is provided, it can be hard to reverse: so it is advisable for governments to have an eye to the future to provide relief where it might be helpful to do so on a long-term basis. For example, increased refundability for tax losses (e.g. carry back periods) for investors and businesses is appropriate policy in the short term, but also improves neutrality between start-up and established firms or risky and less volatile investments.

Getting people back to work with economic growth is the most important economic objective for recovery. Tax preferences in favor of declining industries make it more difficult to shift resources to those industries with better opportunities, so it is important to distinguish between sectors that have experienced a temporary shock and those that are in structural decline.

Sectors hit by initial job losses like manufacturing, construction and health services will return to pre-Covid economic output. It is important that tax policy not hinder the adjustment needed to rebuild productive capacity in these sectors. Sectors like technology, online retail and grocery stores provide new growth opportunities—these industries need more employees over time, so work incentives should not be imperiled. Employees in industries with declining demand, potentially in entertainment, travel, hospitality and store-bought goods, may need to retrain.

Current tax policy is supportive of households and businesses through deferrals or tax reductions as governments continue to deal with health restrictions. It is not the time for tax increases when households and businesses are short of cash. As economies recover, tax increases will need to be judicious since they could otherwise undermine investment and job creation.

After the 2008 financial crisis, it was predicted that taxes would increase to improve fiscal sustainability. As shown in the chart below, taxes as a share of GDP among OECD countries dramatically declined in 2009 due to the global recession. The GDP-weighted average tax/GDP ratio rose after 2010, reaching the same level as 2007 by 2015. Thus, much of the recovery in financial balances was achieved through expenditure restraint and economic growth. Governments not only needed revenue to fund their public services, but also wanted to get people back to work. These objectives are not compatible. 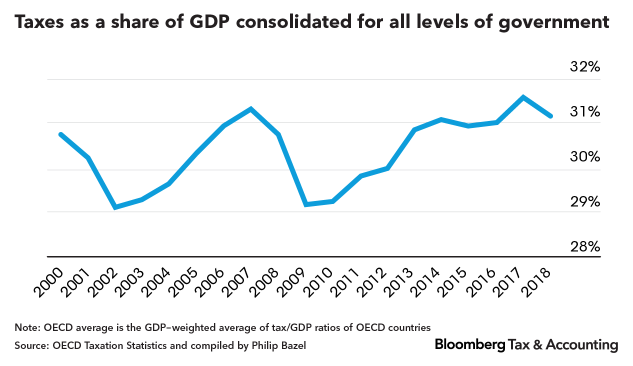 This did not mean that tax policy did not change. In the interest of redistribution, top personal income tax (PIT) rates generally rose after 2009 and many advanced countries reduced income taxes on lower- and middle-income groups, keeping PIT/GDP ratios roughly the same. Some countries increased payroll, property, value-added tax (VAT) and excise taxes (including carbon levies), although general sales and excise taxes as a share of GDP fell. Corporate income tax rates on average fell while some deductions or credits were scaled back (particularly with respect to oil/gas, mining and international income).

Will tax increases be seen in the future? The Covid-19 recession is much deeper than the 2008 financial crisis so perhaps they will. It depends, though, on how much more spending governments will undertake and their tolerance for debt finance.

The Covid-19 recession could also be used to initiate policies that were found wanting before the recession, although affordability will be a challenge. This could include improving productivity, such as through improvements in education and tax reform. It could also mean speeding a transition to a low-carbon economy, which would have associated economic costs. On the other hand, after the Covid-19 shock to the economy, the public may withstand further abrupt policy changes.

A first priority is to support private investment and improve productivity with corporate and personal tax rate reductions. The most economically damaging taxes have been found to be business taxes that distort investment, capital structure and financing. Capital gains on realizations also result in capital being trapped in less-productive investments, with investors wary of replacing their assets with better performing ones. In some countries, high tax rates and numerous preferences have created undue complexity and growth of tax evasion in the underground economy.

Governments could also remove tax barriers that impede economic adjustment by broadening tax bases and reducing tax rates. VAT in particular could be used to raise taxes on domestic and imported digital services; an efficient way to collect user-related income imbedded in digital services consumed domestically. It could include shifting from an annual income base to an expenditure base (exempting the return on capital), something that has already been partly adopted in many countries with respect to the tax-free treatment of income earned by pension and other retirement plans.

The second priority is to shift financing of public services from general taxes to user fees or benefit-related taxes. User fees and benefit taxes are “fair” to the extent that those who benefit from public services pay for them (concerns about low-income households can be addressed by other policies such as income tax credits). Health care and retirement benefits could be funded by payroll taxes. Development charges help fund municipal infrastructure. The shift to electric vehicles will result in the loss of fuel levies, thereby requiring a new source of revenue to fund highways and roads, which would be best with benefit-related charges (e.g., tolls and distance-related charges).

Governments will be interested in improving the social safety net. They may rely on new progressive taxes (wealth taxes, estate taxes or higher personal income tax rates) although that could impede recovery. For political and valuation reasons, these revenues typically yield insufficient revenues to fund social programs. Broad-based taxes on the whole population such as VAT or payroll tax would provide significant funds if pursued.

Research and development will continue to be important in the post-Covid period to spur on new growth opportunities. Training incentives might also be appropriate to help those needed to upgrade skills. The key point in support of these tax preferences is that firms under-invest in research and training if some of the benefits accrue to other firms without compensation (such as trained workers quitting to be employed elsewhere). However, tax policy is only one type of public intervention and should not be presumed to be the most effective one.

Similar arguments may be made to correct for excessive activities when households or firms do not take into account the harm of their actions on others (e.g. pollution, careless driving) or when individuals do not sufficiently take into account the effect of their activities on long-term health (e.g., smoking, alcohol, drugs). While other interventionist policies might be preferable, taxes can steer consumers toward socially better choices with calibrated excise tax rates, especially if they incent less intense consumption—being careful not to leave the door open for illicit untaxed consumption.

Post-Covid, we may see some types of companies becoming less location-specific in their operations, relying on employees no longer needed in an office. This could make labor markets more internationally competitive, in that firms need not move employees who can work from their locations. To the extent some sector employment is more mobile, governments will need to consider how labor taxes might discourage employment in their jurisdiction.

Immobile factors of production—land, resources and structures—will be easier to tax than mobile ones. Governments may try to work together to tax mobile tax bases—for example, the OECD Base Erosion and Profit Shifting project—but this requires cooperation from those governments losing investment or revenues. A public authority may find it easier to assess taxes that are easily levied on their own without international agreement, such as VAT.

Several suggestions are made regarding the evolution of tax policy in the post-Covid recovery period. The main recommendation is to rely on fewer distortive taxes, reduce existing distortions and ensure that tax policy does not make it more difficult to achieve growth and the economic adjustment needed to bring people back to work. Fiscal sustainability is possible without tax increases, but new taxes may be useful to fund new spending where the social safety net is inadequate.

Any prediction is fraught with uncertainty especially after this pandemic-related recession that has caused an unusual supply shock to the economy. If anything, governments should be willing to adjust plans as the post-Covid economy evolves.

The author may be contacted at: policy@ucalgary.ca