BLOOMBERG TAX INTERNATIONAL FORUM
Silvia Zimmermann and Jonas Sigrist, of Pestalozzi Attorneys, consider the tax rules for cross-border re-locations to Switzerland in the context of the Swiss corporate tax reform.

Switzerland has a small domestic market and headquarters and regional hubs of many multinational enterprises and trading companies. One of the key drivers of Switzerland’s business friendly environment is its competitive tax system.

When relocating business operations and other functions, the prospect of achieving a tax neutral step-up in basis allowing for subsequent tax-deductible amortization often plays an important role.

The Swiss corporate tax reform that became effective as of January 1, 2020, provides for new rules for cross-border re-locations, enhancing tax attractiveness and legal certainty. This paper focuses on the tax rules concerning re-locations of business operations, other assets, and mere functions from abroad to Switzerland.

“Step-up” in Basis on Financial Statements

Swiss corporate income taxation generally takes place based on the financial statements drawn up in accordance with Swiss statutory accounting law, unless there is a divergent tax provision (such as the new tax step-up rules shown in the next section).

Therefore, it is possible to achieve a step-up in basis for tax purposes by relocating assets to Switzerland by way of a transaction that allows for capitalization of the assets transferred at fair market value in the Swiss statutory financial statements.

Provided the shareholding represents at least 10% of the capital and/or profit rights in the distributing company or has a fair market value of at least 1 million Swiss Francs (approximately $1 million), the Swiss parent is eligible for the participation reduction, which generally results in a virtual tax exemption of the dividend income.

Because Switzerland has no controlled foreign corporation (CFC) legislation, the participation reduction applies regardless of taxation at the level of the distributing subsidiary. An anti-hybrid rule requires that the distributing foreign subsidiary does not deduct the distribution amount as a tax-deductible expense.

A Swiss company may also achieve a “step-up” in basis by purchasing assets at fair market value. Assets sales resulting in a step-up in basis usually give rise to income taxation at the level of the selling entity and are therefore often not a viable option.

For relocations not involving a transfer of specific assets, such as the mere shift of the place of effective management or of other functions to Switzerland, a step-up in basis is not possible for Swiss statutory accounting purposes.

As a result, contributions and (depending on the group structure and jurisdictions involved) distributions are often the only efficient way to achieve a tax neutral step-up in basis in the Swiss statutory financials.

Swiss statutory accounting law provides for significant discretion regarding the capitalization of specific items. When acquiring intangibles, a company may often choose whether it capitalizes the entire value of intangibles related to the same business operations as one single position (i.e. as IP), or allocates the value to several items such as trademarks, patents, and goodwill. Such itemization of assets affects the amortization rates (outlined in the section below).

We recommend careful consideration of the itemization of the capitalized assets in order to make use of the most tax-efficient amortization period.

“Step-up” in Basis for Tax Purposes

As from 2020, it is clearly possible to achieve a tax neutral step-up in basis for mere tax purposes upon the relocation of assets, business operations, and/or functions from abroad to Switzerland. This includes any transaction resulting in the relevant assets or functions becoming subject to Swiss income tax, e.g. cross-border mergers, re-domiciliation, a shift of the place of effective management to Switzerland, acquisition of assets below market value, or a mere transfer of business functions not involving any immediate asset transfer.

Nevertheless, relocations within the same legal entity are certainly most relevant for a mere tax step-up because the transfer of assets from another entity generally allows for a step-up in the statutory financial statements (as outlined above).

Any kind of assets and functions including mere goodwill may benefit from such tax-neutral step-up in basis, except for shareholdings of at least 10%. Unlike to most other assets, shareholdings must not be depreciated in value for Swiss tax purposes unless their actual value decreases.

Capital gains derived from sales of such shareholdings are generally tax exempt because of the participation reduction (while the re-capture of depreciations is subject to income tax at federal level and in some cantons). Therefore, a step-up in basis for shareholdings of at least 10% would usually not be beneficial for Swiss income tax purposes.

The Swiss tax authorities generally require a valuation to provide for a “step-up” in basis. For this purpose, established valuation methods such as the discounted cash flow method are generally accepted. The value must be allocated to the specific assets relocated to Switzerland, even if the relevant assets cannot be capitalized for statutory accounting purposes. Only to the extent that such allocation is not possible, the exceeding value shall be itemized under the position goodwill.

Swiss statutory accounting law is governed by the lowest value principle. That is, it does not limit the amount of consistently applied amortizations. For tax purposes, however, amortizations must be based on business reasons. 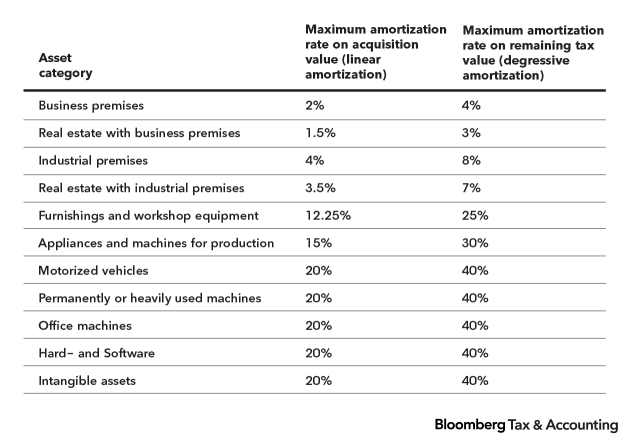 The safe harbor amortization rate for intangibles applies to any kind of intangibles that serve a business purpose and can be capitalized, including patents, trademarks, licenses, copyrights, any other right, acquired goodwill, and product related research and development (R&D).

No regular amortization is required for assets that have no limited lifetime. This applies to real estate and permanent rights in real estate if accounted for as a separate position without buildings, as well as other rights without any date of expiry such as trademarks. Mere goodwill, however, is always deemed to have a limited useful lifetime (even if obviously related to an eternally calculated future free cash flow). Acquired goodwill must usually be amortized over a period of 5–10 years.

The newly implemented tax provisions allowing an income tax neutral step-up in basis for mere tax purposes refers to the general amortization rules mentioned above. Regarding hidden reserves created by the relevant company itself, which are being tax disclosed tax neutrally because of the step-up, however, the new provisions require full amortization within 10 years. 10 years is the maximum amortization accepted for tax purposes. Alternatively, a company may still apply a shorter safe haven amortization period, or a shorter period if required due to an actual value decrease.

Companies usually wish to make (high) amortizations as soon as possible (i.e. at the maximum allowed safe harbor amortization rates) in order to achieve a lower actual income tax burden in earlier periods. Swiss corporate income tax law allows carrying tax losses forward to the subsequent seven years. No such time limitation applies with respect to income realized in order to recapitalize a company in financial distress. There is no possibility at all to carry back tax losses to previous tax years.

In the context of the relocation of significant assets, operations, and/or functions to Switzerland, a step-up in basis may result in a situation where a company’s amortization expenses for the assets benefiting from the fair value step-up are higher than the regular income from these assets or from other operations.

This may result in tax losses during the first years after relocating to Switzerland, which cannot necessarily be set-off against future profits in view of the seven years tax loss carry forward period.

Against this background, a company may wish to extend the amortization over a longer period that it is provided for by the safe harbor tax amortization rates. Such longer amortization period is generally admissible provided that it does not result in the relevant assets being over-valued.

In this context, it may help to allocate certain values to specific assets with a long or eternal lifetime. For example, instead of capitalizing a single position IP, which should usually be amortized within some 5–15 years based on the prudence principle, a company may allocate a part of the value to patents (which may be amortized over their entire expected useful lifetime, which usually equals the end of patent protection) and to trademarks (which do not require any amortization at all as long as the income linked to the trademarks remains stable).

Silvia Zimmermann is Counsel and Jonas Sigrist is a Partner at Pestalozzi Attorneys at Law Ltd, Zurich.