Above: Illuminated fountain outside the Hagia Sophia mosque in the Sultanahmet district of Istanbul, Turkey
Photographer: Kerem Uzel/Bloomberg

Abdulkadir Kahraman and Mahmut Aydemir of EY discuss the draft law on ratification of the Multilateral Instrument which has been submitted to the Grand National Assembly of Turkish Parliament Plan and Budget Committee, and the impact the Turkish approach will have on the Turkey–Netherlands tax treaty.

Enterprises which are willing to expand their business cross-border initially tend to determine the main destination for their investments by considering various factors. There are a number of factors that enterprises do, or should, consider in this regard.

Depending on the features of the sector, the contained risk and the enterprise’s priorities, the most considered factors include geographical location, political risk, market size, finance and economic opportunities, labor market, economic relationships, and the cultural structure.

To minimize the cost of business, at certain times a country’s treaty network and tax burdens are other factors that influence an enterprise’s decisions, but not to the extent that other factors may do.

The points below illustrate several factors that are regarded as important by enterprises.

Why are a Treaty Network and Double Tax Treaties Important for Cross-Border Investors?

It is a fact that the tax burden on cross-border transactions comprises a significant part of a business’s costs. Double taxation risk is an obstacle for overseas investments. To manage this cost and risk, tax certainty is key; thus, each enterprise would like to know the tax consequences of a transaction before entering into it.

Yet tax certainty may be possible when the allocation of taxing rights between jurisdictions is designed accurately and precisely. This is where double tax treaties come into play. In line with the purpose of double tax treaties—to prevent economic and juridical double taxation on cross-border transactions—tax treaties allocate taxing rights between contracting states by considering the source of income and/or the tax residency of taxpayers and other factors and situations.

Depending on the relief method, which could be granted either by the source state or the residence state, double tax treaties provide capital import and/or export neutrality by removing tax uncertainty as a tax risk for enterprises.

That being said, have double tax treaties been successful so far? Yes, but not enough. Because of countries’ appetite for attracting foreign investment and the harmful tax incentives they offer for this purpose, non-double taxation or taxation at a low rate in both the country of origin and the country where the beneficiary is located exist as a headache for tax policy makers.

In response to this, some actions have been taken at international level, under the political leadership of the G-20 and the EU, to combat double taxation and tax avoidance and evasion, through the Organization for Economic Co-operation and Development (OECD) base erosion and profit shifting (BEPS) project.

Tax treaties are undergoing substantial changes to come in line with this shifting paradigm. The taxing right between countries is being re-allocated by considering the place where value is created and where economic activities take place. Therefore, double tax treaties and treaty networks play an important role in the decision of enterprises during the investment process.

The OECD and G-20 countries (including Turkey) have pledged to implement the BEPS Actions. One of these is Action 15, the Multilateral Convention to Implement Tax Treaty Related Measures to Prevent Base Erosion and Profit Shifting (“Multilateral Instrument” or “MLI”) which aims to implement a series of tax treaty measures to update international tax rules.

It is argued that the MLI provides governments with feasible solutions to close the gaps in existing international tax rules by transposing results from the OECD/G-20 BEPS project into bilateral tax treaties worldwide.

The MLI already covers 95 jurisdictions, and entered into force on July 1, 2018. Turkey signed the MLI in 2017 but it has not been ratified as yet.

The MLI contains two types of “standards for the prevention of tax avoidance”:

On June 2, 2020, a draft law on ratification of the MLI was submitted to the Grand National Assembly of Turkish Parliament Plan and Budget Committee, which means the ratification process of the MLI has officially started. In that respect, it is expected that the MLI provisions will be applicable in Turkey very soon.

However, when the draft law on the ratification of the MLI was submitted, it turned out that Turkey’s intention is to go beyond to the minimum standards. Therefore, the draft law in the Parliament includes certain changes on the first declarations and reservations, including the first reservation regarding Article 5.

What Does Article 5 of the MLI Say and Why is it so Important?

Article 5 of the MLI regulates the relief methods for the elimination of double taxation by including several Options. Article 5 is not a minimum standard and countries are allowed to exclude the entire Article or to choose one of the Options laid down.

According to the draft law, Turkey has the inclination to apply Option C—credit method for the elimination of double taxation. In this regard, it can be said that the election made by Turkey for Option C replaces the exemption method completely with the credit method in all its 22 Covered Tax Agreements, including the Turkey–Netherlands Double Tax Treaty (the TR–NL DTT).

If the draft law on the ratification of the MLI is enacted as it is, the “exception method” for the prevention of double taxation in Turkey’s 22 tax agreements in force, including the TR–NL DTT, will be replaced with the “credit method” and dividends from these countries will be subject to “corporate tax” (25% as of today) in Turkey in the future.

There is a relief (exemption method) granted under the TR–NL DTT applicable for the distribution of dividends from Dutch companies to Turkey. According to the DTT, dividends distributed from a Dutch entity to its Turkish shareholders would be exempted from taxation in Turkey as long as there is a minimum 10% shareholding in the Dutch entity, which makes the Netherlands a unique host country.

The Netherlands already deposited its instruments of ratification for the MLI on March 29, 2019, and thus the MLI is in force from the Netherlands’ perspective. The Netherlands has chosen Option A for the elimination of double taxation, which states that the exemption method within the Covered Tax Agreements will not apply for the purpose of the elimination of double taxation if the other contracting jurisdiction exempts the income or the capital from tax or limits the rate at which such income or capital may be taxed.

The MLI does allow a country choosing an Option other than Option C to reserve the right not to permit the other contracting state to apply Option C in relation to its Covered Tax Agreements. For example, as the Netherlands has chosen an Option (Option A) other than Option C and Turkey has chosen Option C, the Netherlands could prevent Turkey from applying Option C in relation to its DTT by putting a reservation in paragraph 9 of Article 5 of the MLI.

The MLI does allow for asymmetrical application regarding the elimination of double taxation. In other words, it is possible that contracting states choose different options to eliminate double taxation. In relation to the Options chosen by Turkey and the Netherlands, if the draft law in the Turkish Parliament is enacted as it is, there will be an asymmetrical application, and each country will apply its election with respect to its own residents.

Within this framework, if the draft law in the Turkish Parliament is enacted as it is, the exemption method in the TR–NL DTT will no longer be applicable. At this point, dividends received by Turkish taxpayers from Dutch companies will be subject to tax in Turkey. However, tax paid in the Netherlands (but basically if certain conditions are satisfied, there is not much tax paid at the level of the Dutch entity in the Netherlands due to the participation exemption rules) with respect to dividends distributed could be deducted from the tax to be paid in Turkey. The tax to be deducted in Turkey is only the tax paid in the jurisdiction from which the dividends are distributed. 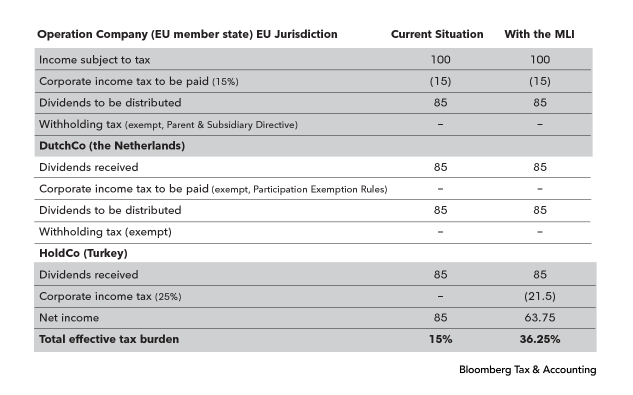 As illustrated in the table above, within the framework of the existing DTT provisions, when dividends are received by a Dutch holding company (DutchCo) from its subsidiary (Operation Company) and are further distributed to its Turkish shareholder (HoldCo), the effective tax burden will be 15%. However, together with the entry of the MLI into force, the effective tax burden of the dividends received over the same structure will be approximately 36%.

This is why Turkey’s preference for Article 5 of the MLI should be reconsidered during the ratification process under the draft law.

If the draft law is enacted as it is, necessary amendments should be made in the domestic legislation, as in other countries. For example, in a case where a tax credit is given for tax paid on the distribution of dividends by a foreign entity, the scope of such credit tax should cover not only the tax paid in the country where the dividend distribution is made, but also the tax paid in other countries on the same income. Otherwise, the competitiveness of Turkish investors would be substantially damaged. This may be the only manner to balance the impact of Article 5 of the MLI.

Abdulkadir Kahraman is a Tax Partner and Mahmut Aydemir is Attorney at Law, LL.M. International Taxation, with EY.

The authors may be contacted at: abdulkadir.kahraman@tr.ey.com