Monitors displaying stock market information are seen through the window of the Nasdaq MarketSite in the Times Square neighborhood of New York City.
Photographer: Jeenah Moon/Bloomberg

Corporate directors trying to meet their fiduciary responsibility to maintain cash reserves by canceling dividends during the coronavirus pandemic could see much of the savings eaten up by surprise tax bills.

Companies are being forced to reconsider how they deploy their cash reserves during the coronavirus outbreak, with many pondering if they should drop or delay their planned dividends. Additionally, some governments are banning financial aid to companies that pay dividends or complete share buybacks.

Regulations differ between countries, but multinationals need to be aware of how the rules apply to each entity as the details of these procedures could turn a benign transfer into tax liabilities, tax advisers warn. Taxes that could end up applying include capital gains tax, interest withholding tax, and corporate income tax.

Already many household names such as IWG Plc, Barclays Plc, and Thales SA. have announced they are canceling their final 2019 dividends, with many more expected to take similar measures as companies rush to boost liquidity.

Once a dividend is officially declared as payable, it is a debt obligation on the company. For example, if a U.S. company declares a dividend of $500 million as payable on a specific date, it would then be considered a $500 million debt obligation on the company. Canceling that debt would be tantamount to having a loan forgiven. The forgiven loan would have to be be recorded by the company as income, now subject to the 21% corporate tax rate.

“It’s always important to recognize that it’s not just a case of halting a dividend, there are a lot of important legal details that could potentially trip companies up,” said Sandy Bhogal, a partner at Gibson, Dunn & Crutcher in London. 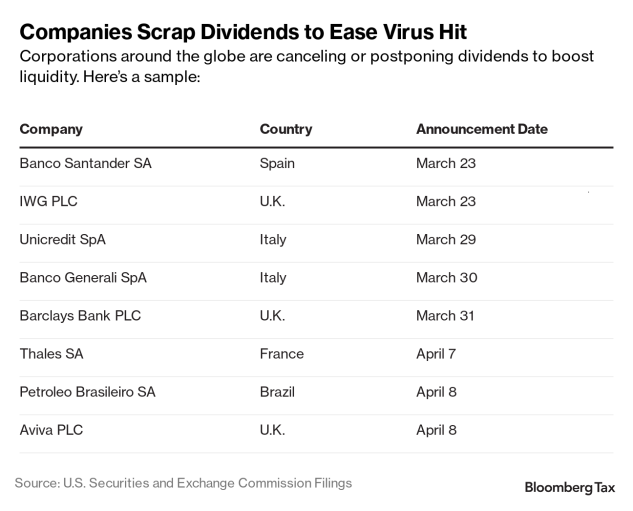 Many regulators are pushing companies to consider canceling dividends if they believe that payment will present financial problems for the company.

“Where the company is no longer able to pay a dividend, directors should halt any dividend and communicate as appropriate to the market,” the Financial Reporting Council, which regulates the U.K.’s corporate governance codes warned in a statement in March.

Not canceling dividends could in some cases breach the fiduciary duty of directors, the regulator said.

However, shareholders will need to vote for a cancellation of declared dividends—dividends that have been proposed by company directors post-profit and approved by shareholders.

“When a dividend is declared, the shareholders have an immediate vested right against the corporation as creditors. If this debt has been canceled or forgiven, companies will have to declare income of an amount equivalent to the amount canceled,” said Robert Willens, a tax adviser and a professor at Columbia Business School.

If the shareholders agree to cancel, the nature of this agreement would be considered a taxable loan arrangement between the company and its shareholders, in some countries including Italy and the U.K.

“If the shareholders decide to waive their right to the dividend, the Italian tax authorities have a rule that this is a deemed payment of dividends and these carry interest withholding tax implications,” said Giuliana Polacco, senior counsel at Bird & Bird in Italy.

“The issue is particularly vexing as a declared dividend becomes a debt owed to the relevant shareholder, and if such debt is subsequently released by a non-controlling shareholder it can create a tax charge for the company,” said Bhogal. That means profits that have already been subject to tax are potentially subject to further leakage, he said.

In the U.K., if shareholders waive their right to a dividend and choose not to charge interest on the subsequent debt obligation created, there would be a taxable profit for the company. The profit would then add to the company’s taxable income.

In some jurisdictions, like France, Denmark, and the U.K., companies may be forced to cancel dividends if they wish to access government aid during the coronavirus outbreak.

The French government said on March 27 that companies applying for delayed tax payments or a government-backed loan were forbidden from paying dividends.

“For groups, this commitment covers all of the group’s French entities and subsidiaries considered, even if only some of these entities or subsidiaries would benefit from support in cash,” the French Finance Ministry said in a statement alongside the announcement. Failure to comply with the ban could mean repayment of the government support with interest and penalties.

The move could make it difficult for companies trying to allocate their resources to affiliates during the crisis, said Jessie Gaston, a partner in the tax group at Dentons in Paris.

There are only a few ways the cash reserves of a subsidiary can be passed to its parent entity, and most other methods such as a group loan carry transfer pricing risks, said Polly Wan, a partner in tax and business advisory services at Deloitte China.

Transfer pricing rules, which govern how multinational companies value intra-group transactions, can be used by multinationals to reduce tax bills by artificially inflating pre-tax losses, and tax authorities monitor them.

“Dividends don’t have any issues in terms of transfer pricing,” said Gaston. “At the end of the day if you decide to stream profits up to your parent, especially when it’s cross border, and you do this through loans or paying this as management fees instead this could cause transfer pricing issues.”

Companies should also consider the local definitions of dividends when considering whether a dividend restriction applies to them, said Gaston.

“In France there is a specific definition in the corporation code of what dividend is. But using that definition would mean that only corporations can distribute dividends,” she said.

This leaves a big question mark over the treatment of partnership payments used by companies in France, she said.

The French finance ministry didn’t immediately respond to a request for comment.

Companies considering selling off parts of their businesses during the crisis that have a holding entity based in a country that doesn’t charge corporate income tax—such as Hong Kong—should also consider if they should pay dividends before the sale of these entities.

The sale entity may be subject to capital gains tax in another jurisdiction, even if it isn’t in Hong Kong, said Wan.

“Companies may wish to review the applicable tax rates of capital gain and dividend in that jurisdiction. In the event where tax on dividend income is lower than that of capital gain, it would be more tax efficient by paying dividend before disposal,” she said.

The crucial takeaway for most businesses trying to navigate cash flow issues by canceling dividends should be how they balance the decision to halt dividends against other options, said Gaston.