The coronavirus pandemic is not only stripping billions out of state economies but also exposing weaknesses in how many states have structured their tax and revenue systems.

Short-term, states will have to plug financial holes to balance their budgets. But the public health crisis is also an opportunity for states to restructure their revenue programs to minimize downside risks and nurture a revenue recovery when normal economic activity resumes.

“There is nothing like a crisis to get states thinking about their tax structures and the things they can do to become more sustainable in the long run,” said Meg Wiehe, deputy executive director of Institute on Taxation and Economic Policy.

The most important short-term weapon available to states during an economic downturn is a healthy revenue stabilization fund, also known as a “rainy day fund.” Ideally these funds help states weather the early phases of an economic storm while contemplating broader tax system adjustments.

States have done a better job lately of building those funds, the Tax Foundation reported recently. Before the 2008-09 recession, the median state rainy day fund was 4.8% of a state’s general fund expenditures, but that number was 8% at the beginning of fiscal year 2020. That said, Illinois and Kansas have nothing in their funds. Arkansas, Kentucky, New Jersey, New York, and Pennsylvania have saved very little for a rainy day.

The Tax Foundation said states should rebuild these funds during prosperous times, calling them “an important part of states’ toolkits in an economic downturn.” 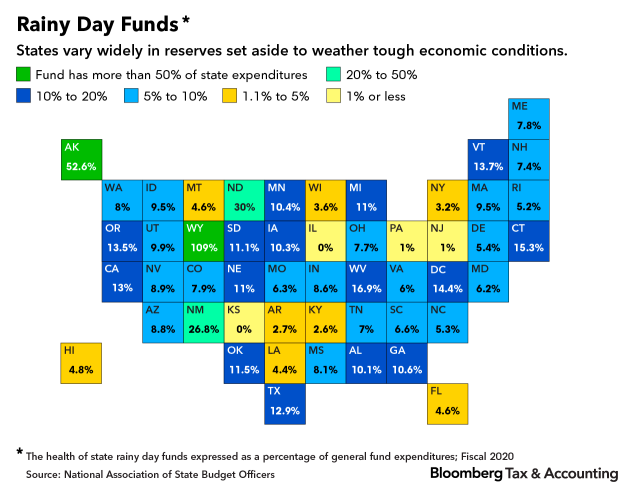 The pandemic appears to be affecting all tax programs, but generally a diverse approach to taxation can limit erratic revenue flows and support recovery, said Richard Pomp, a law professor specializing in state and local tax issues at the University of Connecticut School of Law.

Nick Kilby, a public policy researcher at the University of Kentucky, examined revenue diversification across the 50 states during the 2008-09 recession. The research found diversification can’t be a “pure, stand alone solution,” but “can help states better manage their revenue streams, especially during economic downturns.”

Wiehe noted that Florida, Nevada, Tennessee, South Dakota, and Washington derive between half and two-thirds of their total revenue from sales taxes, compared with a national average of 35%. Several states rely heavily on taxes linked to fossil fuel production. “State tax codes should reflect a diversity of revenue sources,” she said. “When a state like Alaska derives 95% of its revenue from oil and gas taxes in some years, that’s not sustainable.”

State tax codes, like the federal code, are filled with features bestowing benefits on particular industries, products, and classes of taxpayers. Many of these carve-outs serve important policy purposes, but others benefit narrow bands of taxpayers without any broad purpose. A recent report by Georgia’s audits department revealed the state made overly generous contributions to movie producers and recommended capping the film tax credit program “to reduce fiscal risk” to the state.

“If ill-considered or poorly designed,” the report said, such tax expenditures can give unwarranted special benefits. “Therefore, states should report on both their federally-derived and own tax expenditures regularly and carefully evaluate each provision.”

While revenue from personal income taxes frequently declines during periods of joblessness, these taxes have historically provided states with a stable source of revenue. And graduated income taxes permit states to collect funds from populations in the best position to pay.

Seven states don’t have any personal income tax: Alaska, Florida, Nevada, South Dakota, Texas, Washington, and Wyoming. Nine have flat-rate systems. All the others, and the District of Columbia, have graduated tax structures with progressively higher rates for higher incomes.

“The best tool for times like the one we are in now is a truly progressive, graduated income tax,” Wiehe said. “So states like Colorado, Illinois, Michigan, and Massachusetts have a personal income tax, but they are prohibited from anything other than a flat rate. When they think about raising revenue they have to raise the rate on people who have very little personal income.”

Forty-four states and D.C. have corporate income taxes on the books: 30 with flat rates and 14 with graduated rates. But collections from business taxpayers have eroded over the last 40 years. An analysis of state tax data by the National Conference of State Legislatures found the corporate income tax represented 9.4% of the states’ overall revenue in 1981, but roughly 4.8% in 2017.

NCSL attributed the shift to changes in apportionment rules, tax base narrowing, aggressive tax planning strategies, and the rise of S corporations, business structures in which corporate income flows through to individual shareholders. States may want to reexamine some of their rules, NCSL said.

States may also want to consider some type of gross receipts or commercial activity tax, applied to a business’s total receipts instead of some portion of corporate income. States that have this kind of tax—Delaware, Nevada, Ohio, Texas, Washington, and most recently Oregon—contend the structures limit revenue volatility and tax all companies equally for the privilege of doing business in the state.

When the first sales tax laws were established more than 80 years ago, the economy was grounded in manufacturing and sales of goods. But services make up an increasingly larger share of the economy now.

The sales tax software company Avalara notes most state sales tax codes have failed to account for this shift. Of the 45 states with sales taxes, only four—Hawaii, South Dakota, New Mexico, and West Virginia—tax services by default. The others tax a limited number of enumerated services. For more than a decade, tax policy think tanks have called on states to expand their tax bases to services.

“Most states could improve their sales taxes and their tax systems in general with some expansion of the tax base to include services,” the Center for Budget and Policy Priorities recommended in 2009. “Levying sales taxes on services makes state tax systems fairer, more stable, more economically neutral, and easier to administer.”

The emergence of digital products and e-commerce business models has revolutionized the way goods and services are delivered, but state revenue agencies are still behind the curve.

They have been catching up quickly, supported by the Supreme Court’s June 2018 South Dakota v. Wayfair ruling, which created a framework for the states to tax remote sellers. All but two states, Missouri and Florida, have begun imposing tax collection duties on remote sellers. More than 30 states have passed marketplace facilitator laws, which require websites such as Amazon Marketplace and eBay Inc. to collect sales taxes.

There is less uniformity with regard to digitally delivered products and services—streaming movies, electronically delivered music, online gaming, and the like. Avalara reports 30 states and D.C. tax some portions of the digital economy, but 18 states generally exempt such products and services—a significant omission for states hungry for revenue.

The Internal Revenue Service and state tax agencies concede they don’t collect every dollar that’s owed, resulting in a significant annual tax gap. In September the IRS reported an annual tax gap of $441 billion for 2011-2013 and a voluntary compliance rate of 83.6%.

Figures aren’t available for many states, but voluntary compliance rates are thought to be similar, resulting in hundreds of billions of dollars in lost revenue each year. In February, California Attorney General Xavier Becerra estimated his state’s annual tax gap at approximately $20 billion.

Revenue agencies could tackle a larger chunk of the tax gap with more manpower and resources. Yet, the IRS and state revenue commissioners have lamented declining resources for audits and criminal investigations. In February the Center on Budget and Policy Priorities gave testimony before the House Ways and Means Committee pointing to a 24% drop in enforcement funding at the IRS between 2010 and 2018, a 45% decline in the overall audit rate, and a 51% decline in audits of corporations with more than $1 billion in assets.

Efforts to control state spending have included initiatives limiting the authority of legislatures to pass tax laws and limit the rulemaking authority of state revenue agencies. The restrictions prevent policy makers from responding quickly to crises. Some analysts recommend states may want to rollback these impediments.

The National Conference of State Legislatures reports 15 states have some type of supermajority requirement for tax increases. The Center on Budget and Policy Priorities lamented the creation of these supermajority rules in a 2018 report, saying the rules “can weaken a state’s capacity to properly handle its finances by protecting outdated tax breaks, expanding the power of special interests, and limiting states’ options in responding to recessions.”

“It’s exceeding difficult to meet that threshold at a moment when we need to increase revenues,” said Sadaf Knight, chief executive officer of the Florida Policy Institute.

Even after reforms are implemented, the Pew Center’s Mark Robyn said, states need to test their revenue programs to learn how they would perform during a crisis. Too few states are actually “stress testing” their systems, he said.

Robyn defined stress testing as use of a formal economic modeling process simulating a period of crisis. The process can help states “analyze how tax revenues respond to those scenarios, such as a general recession with increasing unemployment, wage growth down, consumer spending down, and government spending up.”

The strategy can also be deployed in a “real-time manner” to track or estimate revenue performance and spending expectations in the midst of a recession, Robyn said.