A Lowe's sign is seen on the outside of a store in Hialeah, Florida.
Photo by Joe Raedle/Getty Images

Wisconsin municipalities are suiting up for a legislative battle with big box retailers including Lowe’s and Wal-Mart next year, hoping to close “dark store” tax loopholes with the help of a receptive new governor.

Wisconsin towns and counties will take another run at legislation that would limit retailers’ ability to appeal their local property assessments by arguing their stores must be valued as if vacant, or “dark,” and available for sale to a future property buyer. The municipalities argue such challenges have slashed assessments on profitable retail stores, resulting in a tax shift from retailers to homeowners.

Two bills addressing different aspects of the dark store strategy collapsed during the most recent legislative session, but municipalities have reasons for optimism with the election of Democrat Tony Evers. The governor-in-waiting promised to close the loopholes “as soon as humanly possible” during the campaign.

“The leadership of the Republican side is skeptical, but I think having the governor on the side of closing these loopholes will be helpful,” said Jerry Deschane, president of the League of Wisconsin Municipalities.

Municipalities are also jazzed by the results from 23 local referendum votes that called on the state to eliminate the dark store loopholes. Just over 1 million voters cast votes Nov. 6, with 78.6 percent opposing dark store strategies. While the results are nonbinding, Deschane said voters clearly telegraphed their frustration to lawmakers.

“We successfully opposed it last time and we will continue along those lines, telling legislators the underlying premise of the legislation is false—there has been no tax shift,” said Corydon Fish, director of tax, transportation and legal affairs for Wisconsin Manufacturers and Commerce.

What’s a Big Box Store Worth? 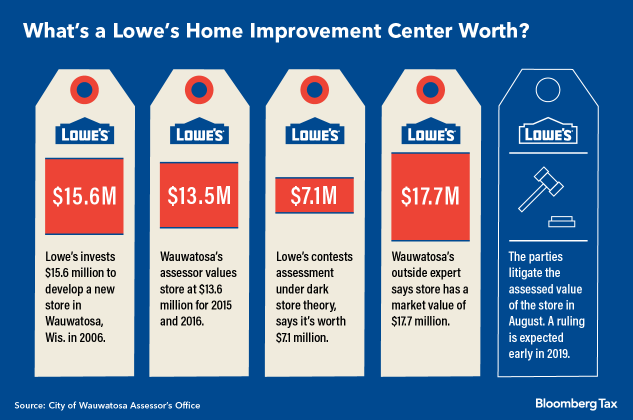 Retailers adhering to the dark store valuation theory have challenged their assessments by arguing their facilities have been specially constructed, rendering them less valuable to second-generation users. In this context, they point to vacant retail stores as the best proxy for the value of their operating facilities.

This theory departs from the traditional cost approach to valuation favored by local assessors, which links assessed values to amounts paid for land, construction, and improvements.

“They are telling us you have to compare to a store that is vacant and available,” said Shannon Krause, assessor for the Milwaukee suburb of Wauwatosa, Wis. “Well no, I’m not going to do that. That’s not what valuation is. You’re completely discounting the income-producing capability of that property.”

Krause said wider application of the dark store strategy would have a devastating impact on her community. As the property tax pie is fixed in Wisconsin, any loss in commercial property taxes must be recovered from taxpayers in other sectors. Based on an internal analysis, an across-the-board application of dark store theory on the commercial sector would result in a 17 percent tax shift to the residential sector in Wauwatosa, costing the average homeowner $1,100 more in property taxes.

Lawmakers considered S.B. 292/A.B. 386, which would have limited retailers’ ability to apply the dark store theory by requiring adherence to generally accepted appraisal methods. A second bill, S.B. 291/A.B. 387, would have rolled back the Wisconsin Supreme Court’s 2008 precedent in Walgreen Co. v. City of Madison. The ruling held that tax assessments of retail stores, subject to certain types of lease agreements, must be based on fair-market rental rates rather than above-market rental contract values.

Fish said the business community would push back on both bills by disputing the tax burden argument promoted by assessors in recent years.

Data from Wisconsin’s revenue department shows the property tax burden has actually shifted slightly from homeowners to businesses over the last decade. The residential portion of the property tax pie stood at 73.8 percent in 2008, coming down to 72 percent in 2017. Meanwhile, the commercial sector’s portion increased from 18.2 percent to 20 percent for the same period.

He also disputed the narrative that assessors are refunding vast sums to retailers through property tax litigation. A recent analysis by the Wisconsin Policy Forum, a tax policy think tank, found only $3.1 million was refunded to commercial property owners in dark store challenges in 2017—a tiny chunk of the $10 billion in local property taxes paid.

“The tax shift doesn’t pan out in the actual data,” Fish said.