States have struggled for two years to give consistent and clear guidance on whether—and how—they will tax a new federal category of foreign income, causing confusion for multinational businesses confronting this patchwork of rules.

But that could change this year.

As many as a dozen states are expected to roll out new guidance or pass legislation on how state tax obligations are affected by the 2017 federal tax law’s global intangible low-taxed income, or GILTI. States that are adopting GILTI—as well as those that aren’t—are expected to act, with urgency the highest in a handful of states that have failed to push out any guidance.

In January, Nebraska introduced legislation, potentially walking back revenue department guidance that had been released late last year. A week later Utah introduced a similar measure preventing the state from taxing GILTI. And Colorado’s revenue department is expected to release guidance on GILTI this summer.

GILTI was designed as a new category of foreign income under tax code Section 951A to discourage multinationals—particularly technology and pharmaceutical companies—from shifting income from intangible assets such as patents and trademarks to controlled foreign corporations based in low-tax countries. States often conform their laws to the federal tax code to adjust to changing tax bases, boost revenues to fund state services, or remain competitive. But GILTI has been particularly complex for states to address.

“We thought the states would have provided the guidance necessary—through statutes and regulations—no later than the end of 2018,” said Jamie Yesnowitz, a principal and state and local tax practice and national tax office leader at Grant Thornton LLP.

“Taxpayers could then consider how to reflect these amounts on their returns if the state wanted to include GILTI to the tax base. But taxpayers didn’t really receive that guidance. We’re left with a patchwork of laws across the states.”

The states’ inconsistency typically falls into three buckets: states that embrace GILTI and have defined their views in guidance, states that conform to GILTI but don’t have clear guidance, and states that don’t tax GILTI. Look for action in all three categories as corporations lobby for favorable tax structures, practitioners said.

“It’s really a wild time right now when it comes to the states’ guidance on GILTI, which is causing a multitude of concerns for corporate taxpayers,” Anavim said. 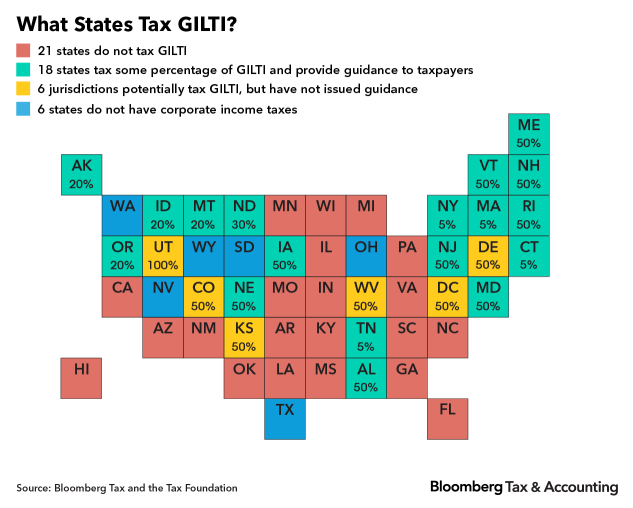 Under GILTI, multinational companies can get hit with the federal 10.5% levy under tax code Section 951A when their controlled-foreign corporations pay less than 13.125% in taxes offshore. The 10.5% tax is the result of a 50% deduction applied against the standard 21% corporate tax rate, which some but not all states incorporate into their own taxation of GILTI.

Eighteen states tax GILTI and have generated specific guidance, but not all states tax the same way. For instance, New York and Massachusetts exempt 95% of GILTI, while Maryland, New Hampshire, New Jersey, and several others direct taxpayers to include 50% of GILTI in their tax bases, according to an analysis by the Tax Foundation.

GILTI hasn’t been a top priority for some states, particularly rural states and those with few multinational taxpayers, said Jared Walczak, director of state tax policy at the Tax Foundation. As a result, he said, several states arrived at their current policies by accident.

“This is still an issue that many policymakers haven’t spent much time on,” said Walczak, who favors decoupling from GILTI. “So you have legislators who may not be aware their states are taxing GILTI or may have no intention that their state tax international income.”

Darien Shanske, a professor of tax policy at the University of California-Davis School of Law, said he’s been disappointed, but not surprised, by the states’ general reluctance to embrace GILTI. Shanske has been an advocate for state taxation of GILTI in response to patterns of corporate profit shifting.

“The issues are very complicated,” said Shanske. “They involve foreign commerce which states are not familiar with, and states may think they are not allowed to tax.”

Iowa is a strong example of a state that arrived at GILTI without much forethought, said Tom Sands, president of the Iowa Taxpayers Association. He called the state’s guidance “terrible tax policy,” but said the revenue department’s hands were essentially tied due to inaction by the Legislature and Gov. Kim Reynolds (R).

“Our real fight is with the Legislature,” Sands told Bloomberg Tax. “We believe the best solution to this is to handle it statutorily and get the law changed to clearly define GILTI income as dividend and Subpart F income and not subject to Iowa income tax. This is our major concern for the upcoming session.”

The Iowa Department of Revenue proposed an administrative rule Jan. 2 that would require multinationals to include their federal GILTI calculations on their state returns after removing any federal deductions under Section 250. The rule also features an apportionment formula for taxpayers with GILTI obligations.

The public comment period for the rule finished on Jan. 21, but it hasn’t been finalized, said department spokesman John Fuller. Sands said ITA and three other organizations submitted comments. ITA stated its opposition to the rule, saying it would lobby the Legislature for a statutory fix.

A similar guidance dispute caused lawmakers in Nebraska to introduce a bill clarifying that earnings from foreign subsidiaries and repatriation income are deductible for state tax purposes. L.B. 1203, introduced Jan. 23, specifies that GILTI and FDII be treated as foreign dividends received, or deemed to be received, and subtracted from federal adjusted gross income when reported for state tax purposes.

Utah followed on Jan. 27 with S.B. 53, which would allow taxpayers to subtract GILTI from their unadjusted income. A fiscal note projected S.B. 53 would reduce corporate income tax revenue by $11.3 million in fiscal year 2021 and by $11.1 million the following year.

“I would expect there will be more done in terms of educating the legislatures on the potential concerns with including GILTI in the tax base,” said Bill Nolan, a managing director of state and local tax at Ernst & Young LLP.

Show Me the Money

States that initially decoupled or chose to tax GILTI at a very low rate could also take up legislation this year. California, Florida, Illinois, Michigan, Minnesota, and Virginia are among 20 states that don’t include GILTI in their state returns.

Massachusetts lawmakers are already seeing lobbying efforts as they head into the 2020 legislative session. Two progressive coalitions are urging them to follow neighboring states in taxing more GILTI and to use the revenue to pay for an overhaul of the state’s transportation infrastructure. Massachusetts enacted H.B. 4930 at the end of 2018, which gave companies a 95% GILTI exemption.

“Massachusetts should do the same as other states and federal law, and tax a fair portion of those offshore profits by including 50 percent of GILTI in our tax base. Doing so would generate approximately $250-350 million/year in new state revenue,” Raise Up Massachusetts and the Green Justice Coalition wrote in a Jan. 15 report.

The GILTI map gets more complicated when local income tax issues come into play. The contrast is stark in the Empire State, where New York City and New York state take different approaches.

The state excludes 95% of GILTI from taxation, while New York City’s Department of Finance in a September memo said companies should include all of their net GILTI in their city tax returns. But the city’s stance could change.

“It’s fluid because the department said it didn’t want to make a decision in a vacuum,” said Kathryn Wylde, chief executive officer of the Partnership for New York City.

“They are waiting for additional information. They want to know if it’s found money, if it’s anti-competitive, or if it’s not enough money to worry about.”

New Rules on the Way

Six jurisdictions conform to GILTI but have not yet issued tax guidance: Colorado, Delaware, the District of Columbia, Kansas, Utah, and West Virginia.

Colorado’s Department of Revenue is working on rules, but the guidance likely won’t be available any time soon, a department spokesman told Bloomberg Tax.

“Our Tax Policy group is drafting rules regarding GILTI that should address the application of the foreign-source income exclusion and the apportionment formula,” Daniel Carr, a spokesman for the revenue department, said in an email. “They have been working on these since early last year and hope to conduct stakeholder work groups this summer.”

States have an incentive to act both quickly and cautiously. Business groups warn that the GILTI states could face constitutional challenges this year if their programs treat multinational and domestic companies differently.

The Tax Foundation’s Walczak said state revenue agencies historically declined to tax corporate earnings generated beyond the “water’s edge.” Some of the states seeking to tax GILTI have breached this norm, resulting in over-inclusion, and breached a Supreme Court precedent directing states to apportion income in a manner that reasonably accounts for income generated for the state.

Walczak said these states are also vulnerable to claims of disparate treatment between multinational and domestic companies. He pointed to New Jersey, Maine, and Maryland as the first wave of states that might get entangled in legal fights.

Shanske, however, hopes the GILTI states won’t be intimidated by aggressive legal tactics by the business community. There are many ways to fairly and legally apportion GILTI income for state tax purposes, Shanske said.

“In the abstract, a state conforming to GILTI in a reasonable way should be free and clear,” he said. “That is not to say there won’t be litigation or a risk of losing, but I think on the law and on policy they should win.”