Millions of online merchants participate in the "Fulfillment by Amazon" program, shipping products to Amazon warehouses where they are stored until sold.
Photographer: Simon Dawson/Bloomberg

Steve Jenson of Logan, Utah, thought he had a good business selling books through Amazon.com Inc.—then he got hit with a $200,000 tax bill from the state of Washington, alleging he had failed to collect and remit sales taxes from customers dating back to 2011.

It was a rude awakening for Jenson, who, like many other Amazon sellers, says he wasn’t even aware that he was supposed to collect the tax in the first place. He is now paying off the bill at a rate of $2,500 a month, which threatens his business.

“I can’t pay money I never made, that I never collected. We can’t afford one more lien. One more state, and that’s it, it’s game over,” Jenson told Bloomberg Tax.

Jenson isn’t alone, and likely won’t be the last third-party seller chased down by states for sales tied to merchandise they housed in Amazon warehouses as early as 2010. At least five states have begun efforts to collect potentially billions of dollars in unpaid sales taxes.

California and Washington were the first to start sending demand letters for back taxes in late 2016, followed by Massachusetts in 2017. More recently, Minnesota, and Wisconsin have confirmed they’re also sending demands for back taxes—usually with penalties and interest attached.

The issue is one of many related to remote sales taxes expected to be aired at a hearing on Capitol Hill Tuesday. Amazon sellers will be among those testifying at a House Small Business subcommittee hearing on how retailers have been impacted by South Dakota v. Wayfair, the landmark Supreme Court sales tax ruling that opened the door to states taxing out-of-state businesses that sell online to customers in their states.

While Amazon collected on sales of its own products shipped from warehouses, it didn’t do so for third-party sales until state marketplace facilitator laws required them to do so. Such laws have blossomed in the wake of Wayfair, which ushered in a new era of sales tax requirements based on a remote seller’s economic activity in a state. 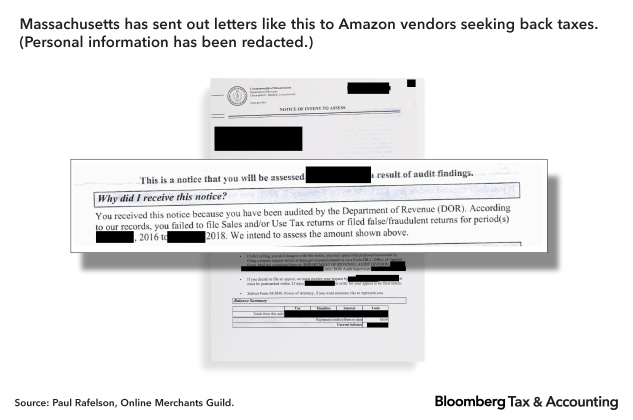 Sellers say they fear letters will be coming soon from additional states.

“Everybody’s going to want money from us, and we just can’t do it,” said Mindy Wright, co-owner of MBW Northwest Inc., a former Renton, Wash.-based online seller of household goods which got a final bill from California in January for more than $36,648 in back taxes, interests, and penalties from sales in 2016, 2017 and 2018, according to bills viewed by Bloomberg Tax.

The taxes involve marketplace sales through the “Fulfillment by Amazon” (FBA) program, which provides packaging, shipping, and customer service for millions of online merchants. Sellers participating in FBA ship their products to warehouses where they are stored until sold. Third-party sales represent 58% of the company’s gross merchandise sales, the company said.

Under the law in most sales tax states, having inventory in an Amazon warehouse qualifies as having a physical presence in that state—giving rise to the responsibility of collecting and remitting sales tax. But for years, many third-party sellers didn’t collect and remit.

Further complicating the situation: After a seller ships merchandise to Amazon, the company can move products from warehouse to warehouse without the approval or knowledge of the seller.

“You are not notified if Amazon places something somewhere,” said Zachary Williams, owner of a Maryland-based online business that sells video game parts and which has been assessed nearly $50,000 by California, according to bills viewed by Bloomberg Tax.

“There are reports you can run, but not a report that says, ‘Tell me where all my products have been,’” he said.

Jill Kerr, spokeswoman for Amazon, said the company’s “Seller Central” website provides information about taxes and a forum for vendors participating in the FBA program.

Kerr declined to comment further since the company is engaged in litigation in California and South Carolina over taxes in the program.

Under California law, a retailer is defined as one who possesses property owned by another and has the power to transfer title of the property from the seller to the buyer.

One of the company’s subsidiaries, Amazon Fulfillment Services, Inc., owns and operates the warehouses and therefore possesses the products owned by third-party merchants under California law. A second subsidiary, Amazon Services LLC, transfers title from the seller to buyers. Since neither perform both functions, Amazon isn’t the retailer, the company and California argue in a lawsuit pending in the state’s Superior Court, Grosz v. California Dep’t of Tax and Fee Administration.

By pursuing third-party vendors, California and other states are essentially endorsing the structure of Amazon’s FBA business, which is designed to avoid tax liability, said Paul Rafelson with the law firm of Francissen, Rafelson & Schick in Boca Raton, Fla.

As executive director of the Online Merchants Guild, a trade association with small e-commerce vendors as members, Rafelson represents hundreds of third-party sellers which have received tax assessments from states. He also represents the plaintiff in a suit against California for not seeking the taxes on FBA sales from Amazon.

If more states go after small third-party sellers, they could “put the entire Amazon vendor community out of business,” Rafelson said. Amazon currently has warehouses—which the company calls fulfillment centers—in 33 of the 45 tax states, and it’s building them in at least three more.

All 45 sales tax states, with the exception of New York and South Carolina, “handle this the same as California,” said Scott Peterson, director of government affairs for Avalara.

California’s actions will come further into focus at the House hearing before the Small Business Subcommittee on Economic Growth, Tax, and Capital Access.

Spencer Thorpe, a seller of drones based in Oregon, said he was called and threatened multiple times by California, according to his advance testimony, which was provided to Bloomberg Tax.

“I honestly felt bullied by the whole process and am currently in a payment plan but do not have the ability to take a paycheck right now because of the stress of this $693.14 monthly tax back payment (that will last for the next 22 months),” his testimony read.

“I love entrepreneurship and am already teaching it to my 3 year old, but this future tax problem is ridiculous,” he said, according to the testimony.

To contact the reporter on this story: in Denver at abaltz@bloomberglaw.com