.'s hometown of Cupertino, California, has given almost $70 million in sales-tax collections back to the company over the past 20 years, with the amounts sharply increasing in recent years, public records show.

The payments have been made under a little-known tax incentive deal struck in 1997, when Apple was on the brink of bankruptcy, and that’s likely to endure until at least 2033. Payments to Apple have continued as the iPhone maker has passed $1 trillion in market value, and reached a high of $6 million in the most recent fiscal year, according to the records.

Dozens of small California cities have since followed Cupertino’s example in sharing local sales taxes generated if the companies build a headquarters or distribution center within city boundaries, or designate an existing facility as its point of sales made in the state. Apple, for example, gets 35 percent of the local sales taxes collected on sales of its products to businesses in California and at its two retail stores in Cupertino, and similar deals benefit electronics retailer and online shopping site .

“I defy anyone to attempt to argue that $70 million from Cupertino has had anything to do with Apple’s success,” said Greg LeRoy, executive director of Good Jobs First, a watchdog group for local and state economic incentive deals. “It’s just a windfall Apple figured it could extract from its headquarters city.”

Bloomberg Tax first detailed the agreements in a story published April 24. At that time, Cupertino refused to provide records of its payments to Apple, saying they were confidential. The city in May provided payment records including more than 6,000 pages of check registers dating to 1998, in response to a formal request under the California Public Records Act.

The cities see the payments, which can last for decades, as a tool to lure or keep e-commerce jobs and bring in new revenue to pay for vital services, since cities keep half or more of the sales taxes generated. Cupertino Mayor Steven Scharf said some of the city’s 64,000 residents may complain about the payments but officials worry Apple would designate its sales elsewhere if the agreement ended.

“The optics of the agreement are not great due to Apple’s spectacular turnaround,” Scharf said. “But ending the agreement would have negative consequences so it is something that the city needs to accept.”

California lawmakers are now weighing bills to ban such deals or require more disclosures about them, concerned they pit one city against another with an unclear benefit to local economies and that they benefit companies that don’t need the money. Existing deals wouldn’t be affected.

Both bills have passed their respective first houses in the California Legislature, and must pass the opposite house by Sept. 13 to reach Gov. (D). He hasn’t taken a position on the bills.

The payments to companies come out of the 1 percentage point local increment of California’s 7.25 percent sales tax.

When Cupertino’s payments started in 1998, the city agreed to rebate up to 50% of sales tax revenue the company generated from sales to California businesses. The company’s share dropped to 35% in 2013 as part of a broad agreement with by Apple to construct the 2.8-million square foot Apple Park campus. Apple now has about 12,000 employees in the iconic, circular building in addition to those at its original Infinite Loop address nearby.

Cupertino is heavily reliant on the sales tax revenue from Apple. Overall, sales to other businesses in California account for 67% of the city’s annual sales tax revenue, and Apple’s sales are most of that, according to budget documents. 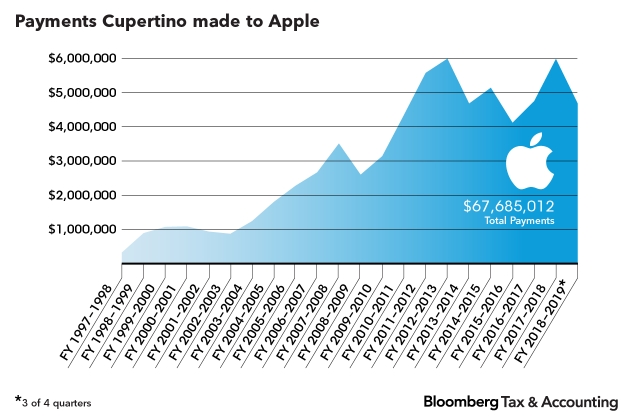 Meanwhile, Cupertino’s general fund has more than doubled, adjusted for inflation, since 1997. The city is projecting $87 million in its general fund for the fiscal year that starts July 1, compared to $26 million ($41 million in inflation-adjusted dollars) in the first year of its deal with Apple.

As much as Apple’s growth has helped Cupertino, it can be argued that the payments to the company took away millions the city could have used to benefit residents and other local businesses.

Since the city and Apple agreed to cut the company’s share of the revenue as of 2014, Apple’s payments as a percentage of city revenue have varied from 4.8% to 6.4%. 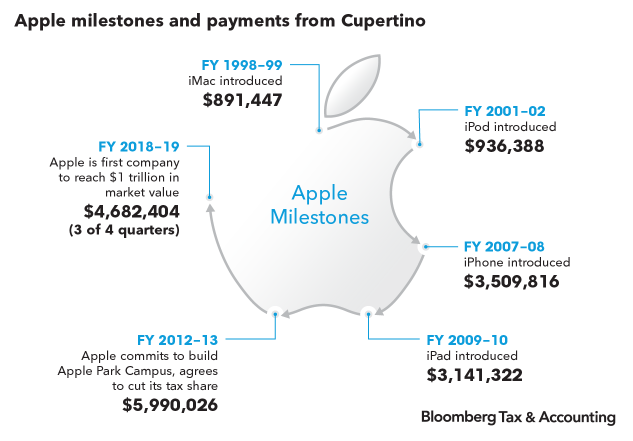 Records provided by the cities of Dinuba and Corona, in response to public-record requests similar to the one made to Cupertino, show their payments to Best Buy and clothing retailer LuLaRoe Inc., respectively.

Dinuba, in the economically struggling Central Valley, has paid or owes Best Buy $9.5 million for its share of revenue from 2016 through 2018.

Corona, in southern California, paid LuLaRoe about $1 million as the company’s share of sales taxes generated from July 2017 through December 2018.

The city of Ontario, in the Inland Empire, denied verbal and written requests for records of its payments since 2015 to QVC and an outside consultant who brokered the deal. It cited state laws that prohibit the release of information that could violate taxpayer confidentiality or result in an unfair competitive disadvantage. QVC didn’t respond to a request for comment.

The city’s information about payments to QVC would allow for extrapolation that would disclose protected taxpayer information, said Ruben Duran, an attorney with Best, Best & Krieger in Los Angeles, representing Ontario.

“If the legislature gave us a tool to protect their private information, we’re going to use that tool,” he said.

David Snyder, executive director of the First Amendment Coalition, said the cities that provided the records realize the information is public. “Ontario is an outlier, and they’ve tried to concoct arguments as to why they can keep this information from the public that do not pass muster under state law,” Snyder said.

Dinuba, an agricultural community of 25,000 people about 200 miles southeast of Cupertino, has little in common with the Silicon Valley hub except how its tax base depends on a single big employer.

The 40-year agreement Dinuba reached with Best Buy in 2015 ensured a warehouse there since 2009—and its 200-300 jobs—would stay put. It also has created a gush of new revenue because all online sales to California customers are now assigned to the city.

Dinuba projects $4.5 million in revenue from the agreement in fiscal year 2019-20, representing almost one-third of its total general fund revenue of $15.5 million.

Under the agreement, the city kept 55 percent of its share of sales tax from Best Buy’s 1.2-million square foot sales center and gave 45 percent back to the company in 2016, the first year it was in effect. The split changed to 50-50 in 2017. Another 20 percent of what the city keeps goes to an outside consultant who brokered the deal, as Bloomberg Tax explained in a story published May 8.

Best Buy is also bailing Dinuba out of a surprise budget crunch with its share of the amount the city and the company are supposed to split under the deal.

When the state agency that administers the sales tax told city officials in 2017 its revenue would be about $2 million less than it was expecting due to miscalculations, Best Buy agreed to defer up to $5 million of its payments, according to city budget reports. Dinuba plugged its budget with the Best Buy deferral, and will pay $1.8 million it still owes to the company for past years in five installments, starting in the next fiscal year.

Dinuba is opposed to the bills to rein in the agreements, breaking from the California League of Cities, which supports the bills as the umbrella organization that lobbies on behalf of California’s 482 cities.

“Dinuba did what any city in California would do to attract a business that has the potential to bring in jobs or revenues—providing incentives that facilitate economic development,” James said.

Dinuba and other cities with the sharing deals point out that even after they give a percentage of the revenue to the companies, they still see a net gain in their tax revenue.

The losers are most likely their neighboring communities that didn’t get a slice of the sales tax their residents paid on purchases because the money went into another city’s coffers, said Michael Coleman, a consultant to the California League of Cities and founder of the California Local Government Finance Almanac. It’s difficult to quantify that impact.

LeRoy, of Good Jobs First, said Dinuba’s deal with Best Buy is especially troubling because the city is financially fragile. Both Cupertino and Dinuba are dangerously reliant on one source of revenue while they give some money back to corporate giants, he said.

Despite Apple’s meteoric rise since the deal with Cupertino was reached in 1997, it will likely continue. The city council has renewed the agreement at least three times, and the 2013 update allows it to renew automatically for up to 20 years as long as the company completes its construction projects, which are on track.

An expiration date would have been a good idea in 1997, Scharf said. To Apple’s credit, Scharf said, the company hasn’t asked for more favors and readily paid all expenses related to construction of its new campus.

The company is currently offering $9.7 million to fund bike and pedestrian transportation projects to head off a potential city proposal to impose a per-employee tax on employers.

Vice Mayor Liang Chao said at the council’s April 2 meeting she is frustrated the money Apple is offering for the five projects is far less than the $10 million the city would get each year if it enacted a per-employee tax, and the projects aren’t all priorities for the city.

“Three of them are what Apple wants,” she said. “I wish the city can negotiate a little better going forward.”

But it’s clear who is in charge of the relationship. Steve Jobs, Apple co-founder and former chief executive officer, let the city council know that when he presented the proposal for the new campus in June 2011, a few months before his death.

“We’re the largest taxpayer in Cupertino, so we’d like to continue to stay here and pay taxes,” Jobs told the council. “If we can’t then we have to go somewhere like Mountain View and we take our current people with us and we give up and over years sell the land here and the largest tax base would go away.” 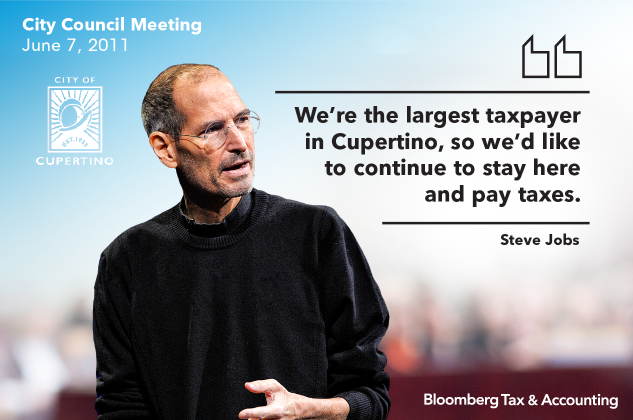 —With assistance from Jasmine Han

How We Did It


Bloomberg Tax made written requests under the California Public Records Act to four cities for records of local sales-tax revenues they paid to companies with which they had incentives agreements.
Cupertino’s payments to Apple Inc. from 1998 through the first quarter of 2019 were totaled from documents that included more than 6,000 pages of check registers. The city provided the documents in May after initially refusing to disclose the information.
Dinuba provided emails between city staff and Best Buy Co.’s senior tax manager, memos summarizing quarterly sales and the payment calculations, and copies of checks issued to Best Buy.
Corona provided copies of forms used to issue checks to clothier LuLaRoe Inc.
Ontario denied a request for records of payments made to retailer QVC Inc. It cited state laws that prohibit the release of information about a taxpayer that could be confidential or result in an unfair competitive disadvantage. It also said the public interest in withholding the information outweighs that of disclosing it.