Shown is a Best Buy story in Emeryville, Calif. When customers anywhere in California go online and use BestBuy.com for a purchase, the city of Dinuba gets a slice of the sales tax.
Photographer: Philip Pacheco/Getty Images

Dinuba, a California town with more than one-fourth of its residents living in poverty, could easily have been a casualty of the pandemic economy. But it had an ace in the hole: an agreement with Best Buy Inc. to share tax revenue on sales from its local warehouse.

Instead of cutting basic services, the city took in enough money from the pandemic’s e-commerce boom to provide computer tablets and microphones to students learning from home. It’s giving aid to businesses on its own while it waits for federal funding from the CARES Act, and offered a three-day Covid-19 vaccination event.

“We were planning for the worst,” Dinuba Assistant City Manager Daniel James told Bloomberg Tax. “But we were able to exhale. These sorts of agreements are just lifesavers.”

Agreements like Dinuba’s are a source of tension because they make one city’s gain a loss to municipalities across the rest of California. In Dinuba’s case, cash is flowing because when customers anywhere in California go online and use BestBuy.com to outfit new home offices, classrooms, or home theaters, Dinuba gets the 1% local share out of the 7.25% state sales tax all customers pay.

While some California cities are making budget cuts to offset plummeting revenue, Dinuba’s yearly sales tax revenue in the first nine months of 2020 totaled $20.4 million—55% higher than all of 2019.

The California League of Cities, an umbrella group representing 482 municipalities, opposes these deals because they steer local taxes generated on a company’s transactions to a single city, with the company sharing part of the proceeds. A few member-cities that use the agreements, including Dinuba and the Southern California city of Perris, have broken with the league and worked to block legislation to ban the deals.

Before the pandemic, revenue from Best Buy already made up two-thirds of Dinuba’s total sales tax revenue, which in turn is the city’s largest revenue source, according to city budget documents. The city expects the amount to continue to grow due to the pandemic and online shopping but is spending the money cautiously in case the 40-year deal that Dinuba struck in 2015 with Best Buy, one of its largest employers, is cut short.

“We’re not going to assume anything is permanent,” James said.

With an unemployment rate that hovers around 15 percent, Dinuba has been keen on its Best Buy relationship since the retailer opened a warehouse there in 2009.

Under the tax-sharing agreement, the city gives Best Buy 50% of total sales tax proceeds then gives another 10% to the lawyer who brokered the deal, Robert E. Cendejas. The city keeps 40%. 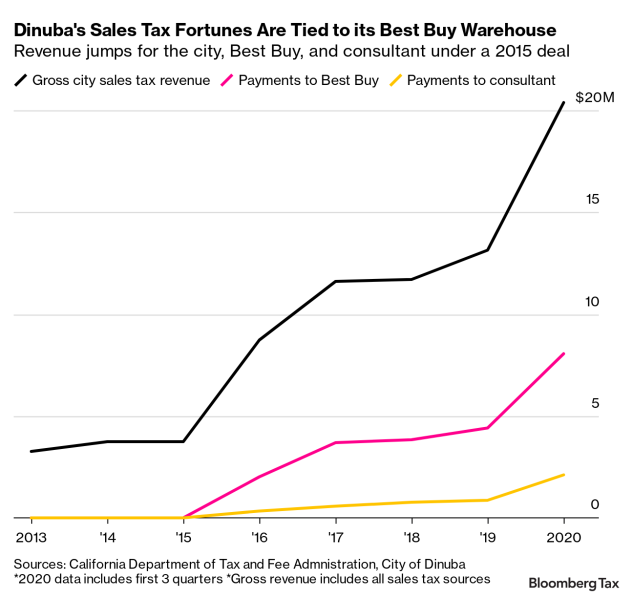 City records show payments to Best Buy for its share of the proceeds have jumped along with the pandemic surge, from $4.4 million in 2019 to $8 million in the first three quarters of 2020. The city’s $3.9 million payment for tax collected in the second quarter of 2020 alone nearly quadrupled from the same quarter in 2019.

“We’re proud to be a part of and support the community of Dinuba, including providing hundreds of jobs for the area,” the company said in a prepared statement. “At the same time, we are also proud to support the other 125 communities across California where our stores are located, and which receive the majority of our overall sales tax collection in the state.”

Dinuba and a handful of cities that have cut similar deals with Apple Inc., QVC Inc., eBay Inc., and other big names in retail are leveraging a 1 percentage point increment of the 7.25% statewide sales tax that goes to the location of the transaction, not the customer, under a 1950s law. 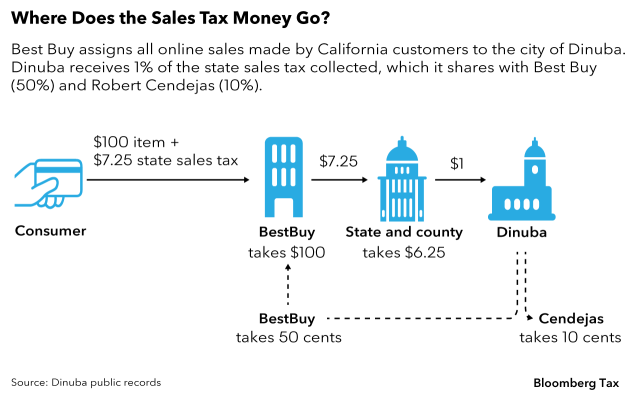 After Bloomberg Tax in 2019 first reported on the tax sharing deals, California lawmakers passed bills banning such agreements in the future and requiring more disclosures about them. The latter bill became law in 2020; the proposed ban was vetoed by Gov. Gavin Newsom (D).

The pandemic may be dividing the cities further, depending on their circumstances. A California League of Cities survey conducted last summer found 90% of cities expect to cut staff or decrease city services to residents due to pandemic-related drops in revenue, and nearly 75% said they may have to do both.

In Dinuba, overall sales tax revenue is 444% higher than it was in 2015, the year before the tax sharing agreement took effect, according to state data.

“The boom to e-commerce has certainly resulted in some communities benefiting from their agreements,” league lobbyist Nicolas Romo said.

The pandemic economy appears to be accelerating the concentration of tax revenue for cities with agreements like Dinuba at the expense of others, said Nathaniel Cline, chair of the Economics Department at the University of Redlands who has examined the impact of tax incentives on the regional economy.

“It’s really an extreme version of something we already knew,” Cline said.

Dinuba’s fortunes mirror those of Best Buy, which reported strong sales in 2020 including a 174% increase in U.S. online sales for the third quarter. The company has said the pandemic makes it difficult to predict whether the trend will continue.

But pandemic-driven growth in online sales of electronics, including small and large appliances and computers, may be here to stay as people have changed the way they work and live, said Jennifer Bartashus, senior retail analyst for Bloomberg Intelligence.

“We think many of those changes in behavior will persist long after the pandemic fades,” she said. “Consumers are increasingly comfortable ordering items online, and the explosion of delivery options help ensure safe and secure delivery of goods, creating a cycle of confidence that encourages repeat online purchases.”

Recognizing a more permanent shift, Best Buy Chief Executive Officer Corie Barry said at the Consumer Electronics Show in January that brick and mortar stores will serve as fulfillment hubs permanently. That shift will keep the money flowing to Dinuba and the lawyer who brokered the deal, because when Californians buy online at BestBuy.com and pick up their purchases at a local Best Buy store, Dinuba still gets the local share of sales tax.

—With assistance from Jasmine Ye Han