California taxpayers have broadly embraced the extension of the 2019 income tax return deadline from April 15 to July 15 due to the coronavirus pandemic.

Personal and corporate tax filers paid a total of $3 billion in April with their 2019 returns, down 85% from tax receipts in April 2019 for 2018 returns, according to data from the California Franchise Tax Board.

April’s tax receipts are usually the highest of the year. 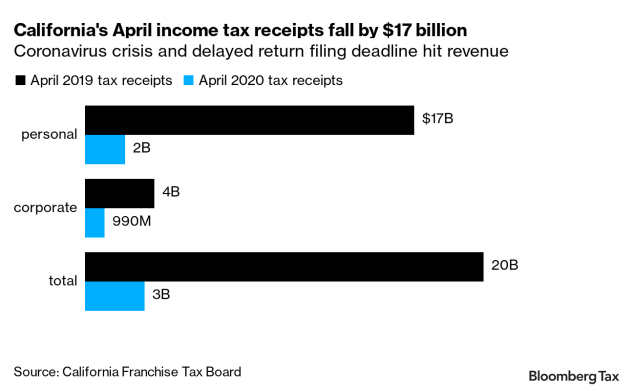 Gov. Gavin Newsom (D) could offer more insight into the long-term impacts of the downturn when he releases a revised budget proposal by May 14 for the fiscal year that begins July 1. He has said he expects revenue to fall by tens of billions of dollars, putting pressure on him and legislators to make large cuts or increase taxes to balance the budget.

The total number of tax returns filed in the month is down by 48% compared to April 2019, according to the tax board. Personal income filers sent 2.6 million returns this April compared with 5.4 million in April 2019; businesses sent 120,201 compared to 248,248 last April.

It’s too soon to know how much of the decrease in tax payments accompanying 2019 returns will be recovered by the July 15 filing deadline and how much is foregone because of the economic downturn, Department of Finance spokesman H.D. Palmer said.

“A reported drop in revenues is definitely consistent with the sharp economic drop-off due to the pandemic,” Palmer said.

In January, Newsom proposed a state budget of $222 billion, with $154 billion of that coming from the general fund and the rest from federal, special, and bond funds. He has already said he expects to exhaust the state’s $17.9 billion rainy day fund due to the pandemic.

In the meantime, the Finance Department on April 30 ordered state agencies to reduce spending by using discretion when filling vacancies, continuing with a halt on non-essential travel, ending buybacks of unused leave from employees, and halting new contracts or purchases.

As another measure of the health crisis’s impact on California’s finances, personal income tax data from State Controller Betty Yee (D)'s office that includes estimated tax payments for the first quarter of 2020 and withholding on current wages, minus refunds, also shows a decline. The preliminary total for April 2020 is $5.1 billion, compared to $18.9 billion in April 2019. A final total will be available the week of May 4, a spokeswoman for the office said.

The month started strong with $66.8 billion in personal income tax as of April 1 for the fiscal year that began July 1, 2019 compared to $61.4 billion for the same period a year earlier, according to the controller’s April tracker. The April drop puts the state at $72 billion in personal income tax collections heading into the fourth quarter of the fiscal year, compared to $80.5 billion at the same point in 2019.

To contact the reporters on this story: in Sacramento, Calif. at lmahoney@bloomberglaw.com; in Washington at jharrington@bloombergtax.com