California Attorney General Xavier Becerra (D) is scheduled to present his plan expanding the boundaries of the state’s False Claims Act (FCA) to tax matters on Thursday. In addition, Michigan and the District of Columbia will consider bills that add tax code violations to the list of actionable frauds coming under their false claims laws. Only a handful of states currently permit tax-related false claims suits, responding to a similar carve out at the federal level.

Enthusiasm for private enforcement of state tax code violations has blossomed after whistleblowers held more than a dozen defendants accountable for denying New York tens of millions of dollars in taxes. In the last three years, New York racked up settlements of $70 million from a hedge fund that improperly allocated corporate income to a low-tax jurisdiction, $13 million from a hospitality company engaged in an accounting fraud, and $10.7 million from an art dealer that circumvented the sales tax.

And, in a jackpot settlement finalized at the end of 2018, New York won $330 million from telecommunications giant Sprint Corp., which failed to properly account for sales taxes on its flat-rate calling plans.

“The thing that got me interested was what New York was doing. In a lot of these cases they collected millions of dollars,” said Mary Cheh, a member of the Council of the District of Columbia and sponsor of the whistleblower legislation. “I don’t like the idea that well-heeled actors are getting away without paying their taxes.”

In total, New York has won 18 settlements valued at $467.4 million since its False Claims Act was revised in 2010. When weighed against the budget for the Taxpayer Protection Bureau, which administers New York’s program, the state has earned a return on investment of 3393%, according to the law firm Kirby McInerney LLP.

Supporters of the New York model contend states reluctant to engage with tax whistleblowers are blowing an opportunity to close the tax gap, estimated in the hundreds of billions of dollars annually across the states.

“New York’s ten years of experience demonstrates that any state establishing a false claims act with jurisdictional thresholds for tax whistleblowers will recover significant amounts of tax dollars, level the playing field for small businesses by stopping sales tax cheats, and not lead to any abuse,” said Gregory Krakower, counsel to the law firm of Getnick & Getnick LLP, who helped draft and implement the law as senior advisor and counselor to the New York State Attorney General. 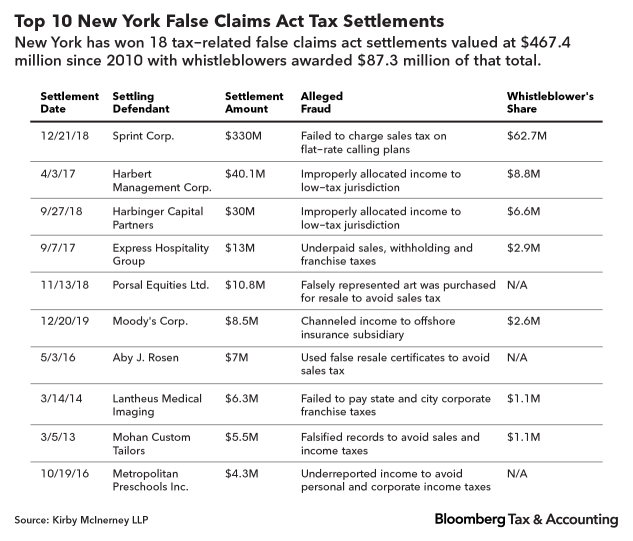 The opponents assert any expansion of whistleblower laws would interfere with the proper administration of state tax codes. Moreover, opponents point to Illinois’ experience with a single law firm that turned Cook County Circuit Court into a factory of tax complaints.

“What you see in Illinois and New York is a handful of law firms just heading out on fishing expeditions, where they will file against dozens or hundreds of companies over disputed points of law in the hopes a court will find against the taxpayer and the law firm will collect significant fees for their involvement,” said Jared Walczak, director of state tax policy at the Tax Foundation, who helped draft the law in a previous role.

Stepping Into the Shoes of the AG

State false claims laws permit whistleblowers to file suits, known as qui tam actions, against parties that knowingly perpetrate frauds against the state. The classic whistleblower is an insider holding specific knowledge of misconduct. Whistleblowers are motivated to come forward under rules permitting a bounty, typically between 15% and 30% of any proceeds won, and attorney’s fees.

“If businesses or individuals are earning huge sums of money and cheating on their taxes, you want to encourage whistleblowers to bring that conduct to the attention of the government,” said Patten, a former Massachusetts assistant attorney general.

While tax qui tams are possible in nine states, there has been significant litigation only in Illinois and New York.

Illinois is routinely identified as the poster child for an abusive false claims process based on the conduct of Chicago attorney Stephen B. Diamond, the most prolific tax whistleblower in the country.

Over the last 20 years, Diamond and his various law firms have filed more than 1,000 lawsuits primarily against retailers. While Diamond has had some big cases, including a $6.27 million settlement in 2016 against the computer seller Gateway Inc., the majority have identified relatively minor tax code infractions and more than half have been dismissed.

New York’s experience has been fundamentally different because the state’s false claims law is structured to screen out frivolous claims and focus on high-dollar frauds, said Randall Fox, a partner with Kirby McInerney LLP and a former chief of the Taxpayer Protection Bureau.

While Illinois has created few barriers to the courthouse, Fox said New York’s law specifies whistleblowers must identify frauds committed by a party with net income or sales of at least $1 million for a taxable year. In addition, whistleblowers must plead tax frauds with damages in excess of $350,000.

As a result, New York’s volume has been modest, Fox said. New York has had 18 settlements, eight cases are pending, and 11 cases have been either terminated, dismissed or withdrawn.

“The business community always asserts you’ll get millions of frivolous lawsuits and if anyone looks at the New York experience they will see that is not the case,” said Fox. “In fact, it’s all quite manageable, and the result has been very strong and important cases.”

California Assemblyman Mark Stone (D) said he will introduce legislation by a Feb. 21 deadline for new bills that is similar to his stalled bill from last year, A.B. 1270. Stone has been hashing out details of the bill for several weeks with Attorney General Becerra.

The D.C. Council will consider Bill 23-35, which mirrors the thresholds in New York’s law. The bill was reviewed by the Committee of the Whole on Jan. 21, but has not been placed on the council’s agenda for final action.

Bill sponsors in the three jurisdictions, however, are bracing for significant opposition from business groups and possibly revenue officials.

The Council on State Taxation, representing the interests of corporate taxpayers, issued a policy statement opposing any expansion of state false claims laws. The council paints the laws as incubators for litigation targeting businesses for inadvertent errors and breaches based on good-faith interpretations of vague tax regulations. COST also objects to a private enforcement system that is more aggressive than conventional agency audits, including treble damages, attorney’s fees, and a longer statute of limitations.

“Allowing private parties to intervene in the administration, interpretation or enforcement of the tax law usurps the authority of the tax agency, creates uncertainty and results in inequitable treatment of taxpayers,” COST wrote.

Some revenue agencies have expressed misgivings about laws that would shift tax enforcement duties to whistleblowers and attorneys general. The Federation of Tax Administrators has not taken an official position on the issue, but the group is wary of any strategies that might interfere with revenue agencies’ ability to administer the tax code and use enforcement resources.

“When revenue directors get together to talk, it’s not an idea they’re fond of,” said federation deputy director Verenda Smith.

-- With assistance from Laura Mahoney in Sacramento.