California is projecting a $54 billion budget deficit through June 2021 as surging unemployment caused by the pandemic-related shutdowns slams the economy of the most populous U.S. state.

The size of the shortfall, equivalent to roughly one third of its annual general-fund spending, marks a stunning reversal for a state that in January was expecting to build up its rainy-day fund to more than $18 billion and was considering new services, such as for children’s education and the homeless.

Instead, state officials are seeing major sources of revenue plummet with the unemployment rate expected to reach 18%. Personal income-tax collections will drop by 25.5%; sales and use taxes by 27.2% and corporation taxes by 22.7% for the year beginning in July, according to the state’s finance department. The bulk of the deficit, about $41 billion, is projected that year.

“This is bigger than all of us and we really need the federal government to do more and help us through this moment,” Governor said at a briefing Thursday. “This is not a red state issue, a blue state issue. It’s human beings who need government at a time of great need and stress more than they ever have in their lifetimes.”

The massive shortfall shows the severe financial toll ahead for state governments that have seen tax revenue decimated as more than 33 million Americans were thrown out of work over the past two months and the retail economy was virtually shut down. That’s left governors of both parties pushing for $500 billion of aid from Washington to avoid steep budget cuts and layoffs that would exert a drag on the economic recovery. 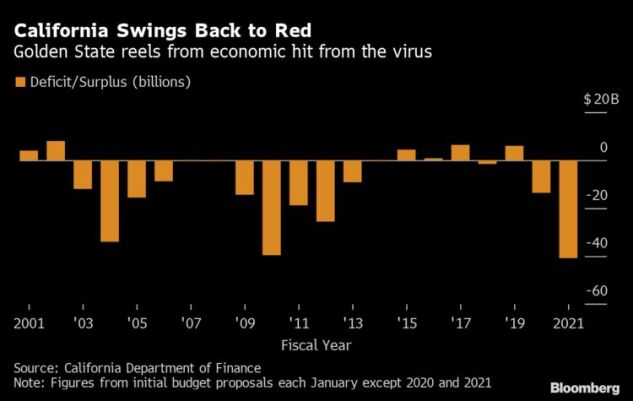 “Severe cuts are obviously likely absent additional federal aid,” said , an analyst at AllianceBernstein, which has about $50 billion in municipal assets under management.

“All 50 states are going to be in a similar difficult situation,” he said.

California’s figures underscore how much worse the crisis may be than the one that followed the Great Recession. The state’s unemployment rate in 2010 hit a record 12%. Officials now project the jobless rate to surpass that from a record low of 3.9% in February. Total personal income is expected to drop 13% from its high, almost three times the decline seen in the previous downturn.

Newsom is scheduled to present a revised budget from his initial January proposal on May 14. By law, California must balance its budget.

“The May Revision forecast projects that the impact of these economic losses will be disproportionately borne by low- and middle-income Californians,” according to the finance department release.

States can raise taxes to increase revenue, and Newsom said Wednesday his budget will include a levy on vaping products. California can also tap the bond market and the Federal Reserve, which has rolled out a plan to lend as much as $500 billion to states and cities to help them contend with the steep drop in revenue.

“There are lots of different ways that the state can pursue to get funds to close a budget gap,” said , head of fixed income for private Wealth Management at Deutsche Bank.

To contact the reporter on this story:
in San Francisco at rvarghese8@bloomberg.net