California’s pursuit of taxes from out-of-state sellers using third-party platforms like Fulfilled by Amazon has expanded from sales tax to income tax.

The push piggybacks on the state’s effort to collect sales tax from out-of-state sellers tied to customers or inventory that they have in California. Although the income tax board says the notices are part of a longstanding enforcement effort, the recipients of the notices say they are among the thousands of online merchants who are newly on the state’s radar through sales tax enforcement.

“We have been pursuing cases based on sales tax returns for years,” tax board spokesman Chris Smith said in an email.

The board sent an average of 11,226 similar notices a year from 2014 to 2016, the most recent period available. The vast majority of those notices went to instate businesses, Smith said.

That means Amazon FBA sellers could now face an income tax filing obligation they previously weren’t aware they had. Amazon doesn’t tell sellers when it moves their goods from one warehouse to another, and in some cases, sellers say they don’t know when they have inventory in a certain state.

California and other states have been trying to get sellers to pay taxes on sales tied to merchandise they housed in Amazon warehouses as early as 2010, seeking payments of potentially billions of dollars of unpaid sales taxes that the sellers were obligated to collect from buyers, but didn’t.

Sellers could be subject to income tax if they exceed annual thresholds for doing business in the state, which for 2019 was sales into the state of more than $601,967 or 25% of total sales. They also may owe a $800 annual fee if organized as a limited liability company, the notices say. Fees and penalties apply if the sellers fail to respond and file a return within 60 days of receiving the notice.

The income tax board’s notices to remote sellers are based on information from the California Department of Tax and Fee Administration, which oversees sales and use tax. 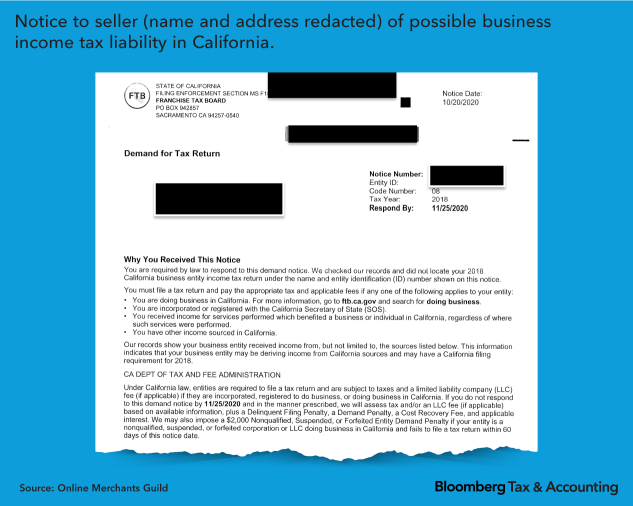 Amazon did not respond to Bloomberg Tax’s requests for comment.

Through California’s sales tax enforcement efforts, 1,768 out-of-state sellers with inventory in the state, for example through the Fulfilled by Amazon platform, have registered with the sales tax department and remitted $65 million in tax due through Sept. 30, 2020, the tax department said in an email.

Another 9,531 remote sellers with economic nexus through sales to California customers have registered and reported $751 million in tax, the department said. Economic nexus refers to the connection a seller has to a state, typically based on sales activity. Since California’s Marketplace Facilitator Act took effect Oct. 1, 2019, platforms with separate accounts for facilitated sales reported $1.56 billion in tax through the same period.

It’s “complete nonsense” that the FTB is now going after Amazon sellers for income tax and a possible violation of sellers’ due process rights, said Paul Rafelson, executive director of the Online Merchants Guild, a trade association with small e-commerce vendors as members. Rafelson said he has heard from 30 to 40 vendors who received such notices from the FTB since mid-October.

“When you extrapolate it to 43 income tax states, it’s scary what it could mean,” he said. “If Amazon sellers have to pay income taxes in all of them, imagine the expense. Where does an Amazon seller go to find an accountant who can file for them in all those states? They can’t afford that.”

Small sellers without inventory in the state should be protected by federal Public Law 86-272, the Interstate Income Tax Act of 1959, which allows a business to go into or send representatives into a state for the purpose of soliciting orders for goods without being subject to a net income tax, Rafelson said. “It’s really disheartening to see them pick on these sellers.”

Richard Cram, director of the National Nexus Program at the Multistate Tax Commission, said he hasn’t heard of states sending income tax notices like California’s, but said “it would basically be standard practice for a state tax agency to look at taxpayers registering for sales tax but not income tax and inquire why those taxpayers did not register for both sales tax and income tax.”

Scott Peterson, vice president of government relations for Avalara, said he was not surprised by California’s latest move. Several states have an economic nexus requirement in their income taxes and a couple have the same for their gross receipts tax, he said.

“Having to file a corporate income tax return isn’t the same thing as owing any tax,” he said. “A business must have income and some of it must be apportioned to the state before the tax applies. The problem is that it is hard to complete an income tax return and some states, like California, have a minimum tax payment.”

Every corporation that is incorporated, registered, or doing business in California must pay the $800 minimum franchise tax, he said.

The Online Merchants Guild sued California Sept. 29 for requiring vendors to collect and remit taxes on products they sell through the Amazon FBA program.

The California Department of Tax and Fee Administration’s actions are “illegally crushing thousands of small business owners,” said the suit, which seeks an injunction blocking the department from going after vendors for the taxes. When the case was filed, CDTFA said it does not comment on pending litigation.

The guild also represents third-party vendors in a California case, Grosz v. California Dep’t of Tax and Fee Administration, alleging the state is wrong to be pursuing small sellers, not Amazon, for taxes. A court recently granted a demurrer motion by Amazon and California—effectively dismissing it because the court didn’t find legal grounds for a case—although Rafelson said he’s going to appeal.

(Updates with response from the Franchise Tax Board starting in third paragraph and additional background throughout.)