California’s recent decision to scoop tens of thousands of out-of-state online businesses onto its income tax rolls will likely spur other states to do the same, but not without courtroom battles over the state’s legal rationale.

Guidance from the state’s Franchise Tax Board mirrors an August 2021 statement from the Multistate Tax Commission reinterpreting a federal law that has largely shielded out-of-state retailers from state income taxes for more than 60 years.

The new interpretation, which applies retroactively, removes some of the protections for sellers that weave online support services into their e-commerce models. The guidance is expected to impact legions of sellers that previously had no income tax obligations in California. Compliance could prove challenging for the estimated 2.5 million online merchants operating in the U.S., particularly small- and medium-sized sellers.

“I just wish California and the MTC had thought about what they were doing and how destructive this could be,” said Paul Rafelson, executive director and general counsel for the Online Merchants Guild, which represents small internet-based sellers. “It’s like they don’t understand the difference between Google and a kitchen table sales enterprise. If every other state starts doing this, we’re done, we’re toast.”

And while California is the first state to adopt the MTC’s legal interpretation, Dobay said it won’t be the last. Colorado, Illinois, Oregon, and Utah have previously said they were considering implementing some or all of the MTC statement.

“California’s being out front on this will provide cover or make other states feel more comfortable about issuing similar guidance,” she said.

To businesses, the change is a drastic expansion of corporate-tax authority. State tax administrators, however, say the MTC’s interpretation and California’s guidance are simply clarifications of existing law.

“This is not a change but an effort to apply a 60-year-old statute to modern facts,” said Brian Hamer, MTC counsel and lead author of the commission’s interpretation. “It is incumbent upon the states themselves to interpret that statute until the courts say otherwise.”

The California guidance updates the state’s approach to Public Law 86-272, a 1959 federal law that prohibits states and localities from imposing income taxes on out-of-state businesses if their only activity within the state is soliciting sales of tangible personal property.

California and the commission broadened the definition of “business activity” in a state, endorsing a general rule holding that businesses interacting with customers through a website or an app engage in a business activity within the customer’s state. For instance, businesses would likely lose the protection of P.L. 86-272 if they offer remote repairs and product updates, provide electronic customer service chat functions, and monitor customer preferences through “cookies” placed on their computers. 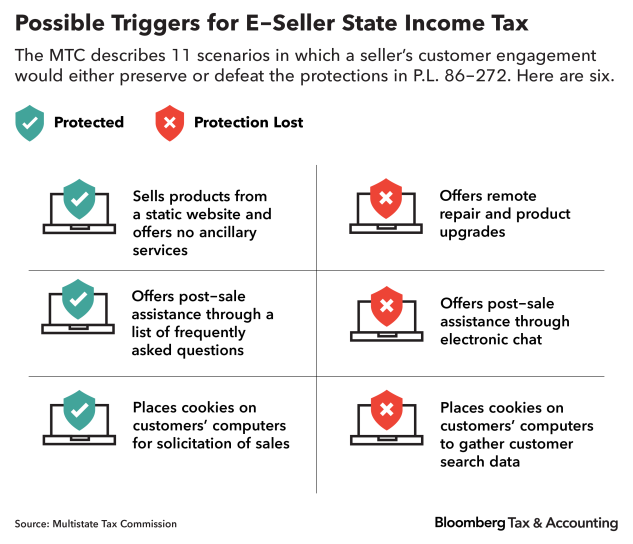 “In the decades since PL 86-272 was enacted, the way in which interstate business is conducted has changed significantly,” the California tax board said in its guidance memo. “Congress, however, has neither created a federal mechanism to provide administrative guidance to taxpayers nor has it updated the statute to indicate how it applies to new business activities.”

California relies on the U.S. Supreme Court’s 2018 ruling in South Dakota v. Wayfair, Inc. as a vehicle for bringing remote businesses into the income tax code. The high court ruling, which permitted states to impose sales tax collection obligations on remote retailers based on economic activity instead of physical presence, has resulted in bonanzas for state coffers, especially in the pandemic years.

“Although the United States Supreme Court was not interpreting P.L. 86-272 in Wayfair, California considers the court’s analysis as to virtual contacts to be relevant to the question of whether a seller is engaged in business activities in states where its customers are located for purposes of P.L. 86-272,” the tax board says in the memo.

Depending on their structure, e-commerce businesses pulled into California’s code could be subject to the 8.84% corporate income tax, the 6.65% alternative minimum tax, or the 1.5% franchise tax, which applies to pass-through businesses.

The cost and complexity of compliance could multiply quickly for small businesses if California’s posture extends to a bevy of new states, said Brad Scott, director of finance for Halstead Bead Inc., an online seller of jewelry supplies.

“With filing income and franchise taxes in other states—I’m not equipped to do that at all,” said Scott, a frequent critic of tax compliance burdens on small businesses. “It becomes a financially difficult thing because we will have to pay our CPA to do it for us and then we’ll have to pay the tax bill itself.”

With customers in all 50 states, Halstead’s duties could jump from four states to dozens, Scott said. The company already pays income tax in its home state of Arizona, but also pays California’s franchise tax and Washington’s Business & Occupation Tax. In addition, Halstead pays tax to Hawaii, which limited the scope of P.L. 86-272 protections in the Aloha State two years before the MTC’s statement.

California intends to apply the guidance retroactively to all open tax years, tax board spokesperson Angela Jones said. The California statute of limitations for income tax matters is four years, but that is often extended when a taxpayer is being audited.

The board’s position could find its way into ongoing audits for past years, applying rules that are different from what taxpayers followed at the time they filed their tax returns, said Carl Joseph, principal in indirect state and local tax services at Ernst & Young LLP. Taxpayers have relied for many years on FTB Publication 1050, which still reflects the board’s previous interpretation of what activities are protected under PL 86-272.

Jones said the tax board is in the process of updating Publication 1050.

“The question of retroactivity here really comes down to fair play,” Joseph said. “If I’m a taxpayer and I’ve done everything I can to make sure that I am consistent with California’s view of 86-272 and I read the Pub 1050 every year, I still have a problem because they’ve pulled the rug out from under me.”

“Companies won’t really know what the policy is until they get audited for past periods and California might try to apply this position,” Yesnowitz said.

California’s new posture and its commitment to retroactive application will likely be challenged as soon as the state starts issuing assessments. The American Catalog Mailers Association and the Direct Marketing Association have been critical of the commission’s interpretation and are poised to challenge aggressive audits.

DMA counsel George S. Isaacson called California’s posture a disingenuous interpretation of P.L. 86-272 designed to rob taxpayers of important protections guaranteed by Congress. Isaacson, who represented e-commerce sellers before the Supreme Court in Wayfair, also objected to California’s creation of a legal rationale that he believes was never envisioned under the Wayfair precedent.

“California’s reliance on the Wayfair decision is ill-placed,” said Isaacson, a partner with Brann & Isaacson in Lewiston, Maine. “That decision neither referenced nor applied to P.L. 86-272. Indeed, to the contrary, the majority decision acknowledged the supremacy of congressional authority, when affirmatively exercised, to regulate commerce.”