California legislators have introduced a bill to impose a wealth tax on high-wealth residents and some nonresidents. Tim Gustafson and Eric Coffill provide an overview of the proposed wealth tax and its provisions, hypothetical tax calculations for various taxpayer scenarios, and a discussion of the bill’s relief mechanisms and enforcement provisions.

California already imposes a personal income tax on its residents at the highest rate in the country. Now the state seeks to tax the wealth of certain high-wealth residents—both current and former alike.

Assembly Bill (AB) 310 was introduced in the California Legislature in its current form on March 25, 2021, and would apply to tax years beginning on or after Jan. 1, 2022. Previously a spot bill relating to public banks, the bill as amended would impose a 1% tax on a California resident’s “worldwide net worth” greater than $50 million (or $25 million if married filing separately), and a 1.5% tax on residents with a worldwide net worth greater than $1 billion (or $500 million if filing separately) for “sustaining excessive accumulations of wealth as a resident” of the state. (AB 310 as amended Apr. 5, 2021, adding California Revenue & Taxation Code Section 50305(a).) This article provides an overview of the proposed wealth tax and its provisions, hypothetical tax calculations for various taxpayer scenarios, and a discussion of the bill’s relief mechanisms and enforcement provisions.

Before turning to the details of AB 310, however, it is important to note that the California Constitution limits the rate at which certain personal property can be taxed to 0.4%, and also limits the tax rate on such property to no more than the tax rate on real property in the same jurisdiction. (California Constitution Article XIII, Section 2.) Consequently, a constitutional amendment is required before AB 310 can be brought into effect. Assembly Constitutional Amendment (ACA) 8, which was introduced days prior to the current AB 310, would amend the state Constitution to specifically allow for the wealth tax by authorizing “the taxation of all forms of personal property or wealth, whether tangible or intangible” and eliminating the tax rate cap on that property or wealth. (ACA 8, as introduced March 22, 2021, amending Calif. Const., Art. XIII, Section 2.)

Under AB 310, the wealth tax would apply to all California residents, part-year residents, and temporary residents who meet the wealth thresholds identified above. For purposes of the tax, temporary residents are individuals who spend more than 60 days in California during the current taxable year and have spent either at least 120 days in the state over the prior two taxable years or at least 150 days in the state over the prior four taxable years. The tax also would apply to certain former residents (i.e., nonresidents), specifically individuals who were subject to the tax in one of the preceding four years but who now are nonresidents with no expectation of returning to the state to reside.

The tax would be calculated based on an individual’s worldwide net worth. AB 310 identifies 18 categories of assets—a non-exhaustive list—that must be reported separately to determine worldwide net worth, including: stock in any publicly and privately traded C-corporations, partnership interests, cash and deposits, offshore financial assets, real property, and art and collectibles. While subject to the bill’s reporting requirement, directly held real property would not be included as part of an individual’s taxable worldwide net worth; neither would directly held tangible personal property that is located outside of California.

The legislation directs the California Franchise Tax Board (FTB) to adopt regulations to clarify valuation methods on a number of subjects, including publicly traded assets, interests in business entities, interests in trusts, and debts and liabilities. The FTB would be required to contract with third-party appraisers to conduct authorized independent appraisals for certain assets. Additionally, all non-publicly traded business entities (other than sole proprietorships) doing business in the state would be required to file an information return with information sufficient to calculate the value of the business, along with the names and addresses of all individuals who would be entitled to share in the net income of the entity if distributed.

For former residents who were subject to the tax in one of the preceding four years, the numerator for the first year that the individual was not a resident would be the years of residence over the three previous taxable years plus a fraction between zero and one based on the percentage of days in the current taxable year the individual was present in the state. For each subsequent year, the former resident’s numerator would be reduced by one until the numerator reaches zero. For individuals who have never been a California resident before (i.e., new residents), the numerator would be zero for the first year and would increase by one each subsequent year of residence until it reaches four.

Application of the Tax to Hypothetical Taxpayers

The following hypothetical taxpayer scenarios are intended to highlight the calculation of and potential liability resulting from the proposed wealth tax for the 2022 tax year (unless otherwise indicated). The filing status of the taxpayer in all scenarios is single. 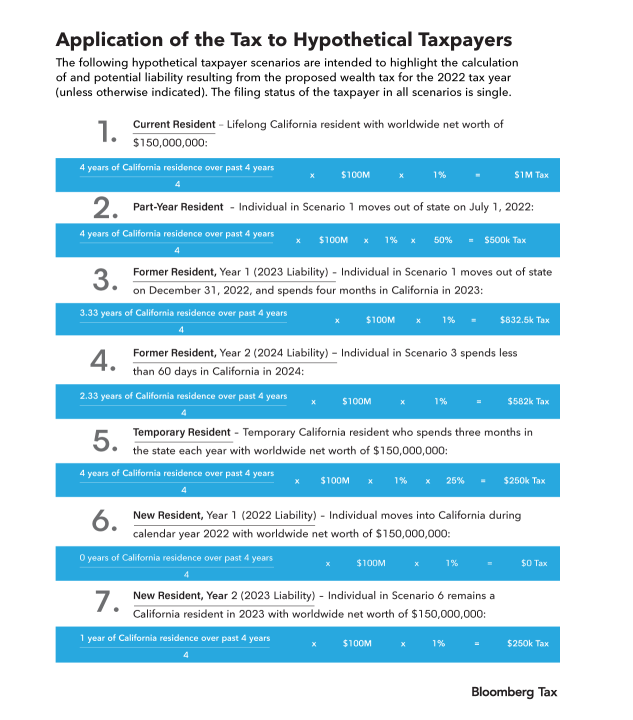 AB 310 contains three primary, potential relief mechanisms for individuals subject to the new wealth tax. First, the bill would allow for a credit against the tax for any “net-worth wealth tax paid to another jurisdiction relating to assets subject to” California’s wealth tax. (AB 310, adding Cal. Rev. & Tax. Code Section 50311(a).) No other state currently imposes a net-worth wealth tax, though, such that this credit provision offers no relief for the time being.

Second, the bill provides for a credit against the tax for individuals owning real property indirectly (e.g., through a corporation, partnership, trust, etc.) based on an individual’s pro rata share of property taxes paid regarding the ownership of the real property. No credit would be allowed for “any transactions tax, excise tax, or any other tax based on use of the property.” (AB 310, adding Cal. Rev. & Tax. Code Section 50311(b).)

In addition to the relief mechanisms, AB 310 contains three key enforcement provisions. The first mirrors another Corporation Tax Law provision, namely the large corporate understatement penalty. (See Cal. Rev. & Tax. Code Section 19138.) Like the corporate penalty, AB 310 would impose a strict-liability penalty of 20% of any understatement of tax where the understatement exceeds the greater of $1 million or 20% of the tax shown on an original return (or amended return filed on or before the due date of the return of the taxable year). The penalty would increase to 40% if the understatement results from not reporting an asset required to be separately listed for purposes of calculating an individual’s worldwide net worth. The only grounds for refund or credit for amounts paid to satisfy the penalty would be that the amount of the penalty was not properly computed by the FTB. No penalty would be imposed if the understatement is attributable to a change in law or an individual’s reasonable reliance on the FTB’s written advice.

AB 310 would also extend California’s False Claims Act to claims, records, and statements made in relation to the wealth tax if the damages pleaded exceed $200,000. Consequently, an individual subject to the wealth tax that knowingly presents a false or fraudulent claim for payment or approval or knowingly makes or uses a false record or statement material to a false or fraudulent claim, would be liable for three times the amount of damages sustained by the state (e.g., the deficiency assessment amount) and for the costs of a civil action brought to recover any penalties or damages. An individual who violates the False Claims Act is also be subject to a civil penalty between $5,500 and $11,000 for each violation. (Government Code Section 12651(a).)

Finally, AB 310 would authorize the FTB to “hire and pay reasonable fees to any outside experts or outside counsel as appropriate and to help fully administer and collect the Wealth Tax.” (AB 310, adding Cal. Rev. & Tax. Code Section 50314(g).)

During the 2019-2020 Regular Legislative Session, California lawmakers introduced a wealth tax bill proposing a 0.4% tax on net worth over $30 million with the portion subject to tax based on an individual’s years of residence in California over the past 10 years (rather than four years as proposed by AB 310), but that bill died in committee. Despite being projected to generate over $22 billion in additional revenue per year, it remains to be seen whether AB 310 will meet a similar fate. The valuation issues inherent in AB 310 likely would require a Herculean effort by both taxpayers (on the compliance side) and the FTB (on the administration side) and seem riddled with uncertainty and speculation. Indeed, the fact that the FTB may need to hire outside experts or legal counsel to administer and collect the tax underscores the administrative complexities and difficulties arising out of this bill.

Further, two of the primary relief provisions—a credit that no one currently can use and an ambiguous appeal for fairness by using something other than a day count-based apportionment method—do not appear to offer much in terms of actual relief. In contrast, the enforcement mechanisms could be particularly consequential, potentially subjecting residents and nonresidents alike to a substantial strict liability penalty or worse, treble damages under the False Claims Act. Add in the prospect of litigation over taxing the wealth of nonresidents (among other aspects of the bill), and one reasonably can expect this tax to face serious opposition in the California Legislature.

The specific provisions of AB 310 aside, any wealth tax or personal income tax rate increase likely will face stiff headwinds in the weeks and months to come given California’s current budget surplus and with tax collections exceeding projections month over month. Additionally, Governor Gavin Newsom has stated publicly that he does not support any tax increases during this legislative session. We will continue to follow AB 310 and report on any relevant updates.

Tim Gustafson is currently Partner in Charge of the Eversheds Sutherland’s Sacramento office. He counsels clients on all aspects of state and local tax controversy, including audits, administrative appeals, and litigation.

Eric J. Coffill is senior counsel in the Eversheds Sacramento office and has nearly 40 years of experience counseling clients on state and local tax controversy and litigation matters at the administrative, trial, and appellate levels, particularly those involving the California Franchise Tax Board (FTB) and the California Department of Tax & Fee Administration.