The city of Chicago is collecting hundreds of millions of dollars under a one-of-a-kind strategy to tax business use of remote computing services.
Photographer: Luke Sharrett/Bloomberg via Getty Images

The city of Chicago has figured out an innovative—and lucrative—way to tax the cloud.

Chicago four years ago implemented a one-of-a-kind strategy to tax businesses for their use of remote computing services, like information from an out-of-state provider stored on the internet, or cloud, instead of on a computer hard drive. Under the program, known as the Personal Property Lease Transaction Tax,tax collections on cloud computing contracts have been ramping up at an impressive clip, according to data obtained by Bloomberg Tax from a Freedom of Information Act request.

“I consider it a success. Not only did this generate a significant amount of revenue, but it also raised awareness in the industry and within accounting and law firms of the potential exposure that exists out there,” said Elaine Herman, deputy director of tax in Chicago’s Department of Finance.

The department noted 623 businesses filed returns and remitted taxes on cloud computing leases during the first two and a half years of the program. In total, 2974 businesses are registered with the city to collect or remit under the broader lease tax.

Chicago’s collections could surge for several years as businesses continue to embrace cloud-based products. Global sales of cloud services are projected to grow “exponentially” for several years, according to the consulting firm Gartner Inc., racing from $182 billion last year to $331 billion in 2022.

A significant portion of Chicago’s cloud computing tax revenue came into city coffers under a special Voluntary Disclosure Agreement (VDA) program, which permitted taxpayers to self-assess and pay outstanding liabilities without penalties. In total, Chicago collected $9.6 million under the voluntary program for liabilities racked up during 2015 and nearly 200 business came in from the cold. At least six businesses entered into settlements totaling more than $500,000.

A related FOIA demand by Bloomberg Tax revealed the names and liabilities of 21 large businesses settling under the voluntary agreement. In some cases the names of the taxpayers were redacted by the Chicago Law Department. Bloomberg Tax is challenging that decision in an appeal filed with the Illinois Attorney General.

The six largest settlements are:

Bloomberg Tax reached out to several companies, including Hubspot, CareerBuilder, CDW Direct LLC, Avention and GoDaddy.com LLC to discuss their settlements. Only HubSpot responded, saying it would not comment. 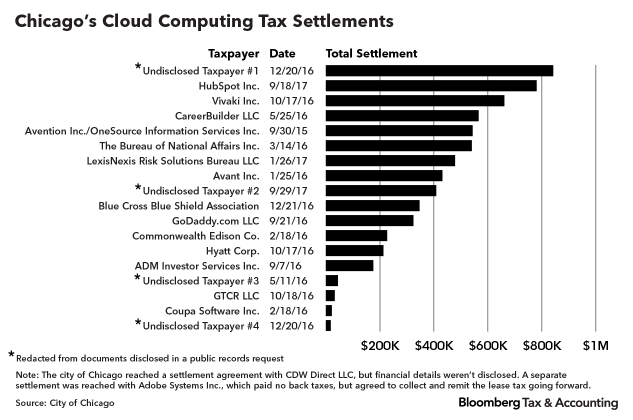 Chicago’s success reflects a creative adaptation of the existing tax code to capture revenue from new business applications of an emerging technology. Chicago may be the only jurisdiction in the country taxing the digital economy through an interpretation of its lease tax. Some states and municipalities have found success taxing the cloud through their sales tax codes and unique taxes on digital products and information services. But Chicago is distinct based on its use of “nonpossessory lease” rules to capture tax revenue from cloud computing.

“Chicago is unique in this country. I know of no other jurisdiction that does what Chicago does,” said Steven N. Wlodychak, a principal in Ernst & Young LLP’s Indirect (State and Local) Tax practice.

Samantha Breslow, chair of the Chicago Bar Association’s state and local tax committee, said Chicago is barred from taxing services, causing it to develop tax rules capturing transactions for the usage of property through a lease or license. Chicago is aided by its substantial home rule authorities.

“That’s why Chicago and Cook County have all these strange and wacky local taxes that you don’t see in other jurisdictions,” said Breslow, an associate in the Chicago office of Horwood Marcus & Berk Chartered.

“We are seeing quite a few taxpayers dealing with the application of the tax to software in the audit stage, in the assessment stage,” she said. “They are very aggressive.”

Evolution of the Lease Tax

The lease tax captures transactions involving automobiles, copiers, postage machines and other items of tangible personal property, but Chicago has maintained the tax applies to leased time for the use of computers since the program was implemented in 1974. The strategy was refined in 1992 when the lease tax became the Personal Property Lease Transaction Tax and in 1994, when a definition was added for “nonpossessory computer leases.”

Weston Hanscom, deputy corporation counsel for the Law Department, said the guidance emphasized Chicago’s authority to impose its 40-year-old lease tax on contracts for a wide swath of cloud applications. The city specified that cloud models including Platform as a Service (PaaS), Infrastructure as a Service (IaaS), and Software as a Service (Saas) are all within the scope of the lease tax.

“For the most part we do not have the authority to tax services,” Hanscom said. “We do have home rule authority to tax the sale, use and lease of tangible personal property. So that’s where our lease tax comes in. In the nonpossessory computer lease context, we are taxing the customer’s lease of the use of tangible personal property, which is the provider’s hardware and the software that’s on it.”

Stanley Kaminski, a tax partner with Duane Morris LLP in Chicago, said the cloud computing ruling and the subsequent guidance were efforts to inform taxpayers about the program and quell criticism of audits targeting cloud-based subscription models.

More importantly, he said Chicago sought to sweep more providers into compliance with agreements to collect taxes from customers operating in Chicago. In particular, Chicago was anxious to gain support from sellers of subscription-based legal research services and large providers of business technology services.

“The city’s enforcement efforts over subscription services got a lot of flak so the city issued Ruling #12 to explain its reasoning,” said Kaminski, who served as Chicago’s corporation counsel for taxation in the 1980s.

Chicago’s goals could also be seen in the voluntary settlements. Legal research providers and data services companies including HubSpot, CareerBuilder, GoDaddy and CDW Direct LLC participated. The companies paid assessments and committed to collect taxes from customers going forward. Software giant Adobe Systems Inc. paid no back taxes, but agreed to collect on behalf of the city going forward.

Chicago appears to be one of the few jurisdictions across the country to effectively tax cloud computing and the city’s lease tax strategy breaks with traditional tax norms, said Mark Nebergall, president of the Software Finance and Tax Executives Council.

“Unless there is a services imposition on the sales tax, it’s hard for states to tax this,” Nebergall said. “And legislatures don’t like passing tax increases so they are perfectly happy with the DOR de facto raising taxes on people by taxing something the legislature has never considered.”