Businesses are pushing lawmakers to streamline income tax requirements so that workers and employers don’t risk double taxation and taxation by different states as the months of telework persist.

Payroll departments are used to handling tax withholding obligations for multiple states. But once workers fled to homes and other locations, many in different states—and the work-from-home period stretched beyond any state’s regulations—daunting questions arose.

The complications involve not only individual workers’ taxes but company income taxes as well. Payroll executives worry that the mere presence of employees working in new states might create “tax nexus,” sufficient contacts that would subject a business to taxes in those states.

Executives at OneAmerica Financial Partners Inc., an Indianapolis-based insurance holding company, said they were prepared for a period of uncertainty when most of their 2,300 employees were ordered to ditch their offices in California, Indiana, Maine, and Wisconsin, and work from home. But keeping tabs on employees quietly roaming the country has gotten progressively more difficult.

“The joke in my profession is payroll is usually the last to know,” said Jon Schausten, the company’s director of payroll and human resources information systems. “One of the big things coming from this whole teleworking experience is the number of people disclosing they’re working from a remote location other than the one we had set up for them.”

Making it harder is the fact that only a quarter of the states issued tax guidance, raising the possibility of double taxation for some workers. Many employers believe the best solution is a federal law waiving state personal income tax and tax nexus rules for corporate income and franchise taxes, a strategy that’s part of the package of pandemic relief measures offered in the Senate earlier this month.

State tax officials oppose the idea of federal government interference in their policies and regulations, but companies are promoting it.

“This legislation is huge for companies that thought—like everybody else—they were doing what’s best for their associates while managing their businesses,” Schausten said. “The last thing we want to do is create tax nexus, and a double dip on taxes for both the employer and the employee.”

Before the pandemic, 31% of workers telecommuted, or worked from home, between one and five days a week, according to a national survey published in May of office-based workers by the consulting firm Global Workplace Analytics. The number jumped to 88% after states issued shelter-in-place orders.

At the height of the pandemic, at least 75 million people were working from home. Many fled virus hotspots like New York and San Francisco, said Kate Lister, president of the firm. A majority of Americans will eventually go to back to their traditional offices, but Lister said millions will never return.

“We are talking to a lot of companies that have just put their return-to-work plans on hold until the middle of next year,” Lister said. “Long-run, though, this is going to stick. This is the tipping point.”

“I think more and more people will find it more convenient to work remotely and employers will accommodate it,” Wlodychak said. “If that’s the case, the whole administrative and compliance framework for state taxes changes.” 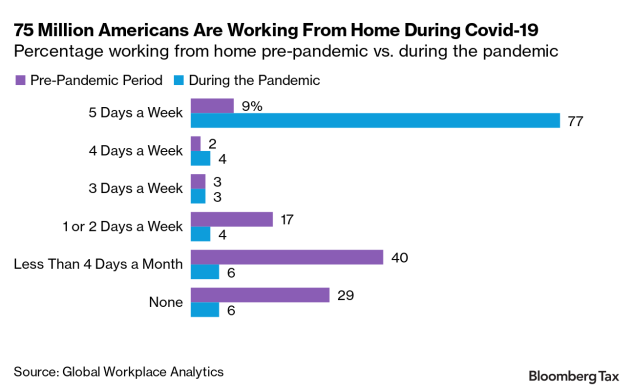 Americans working from locations beyond the employer’s home state became subject to state and local income taxes in a second state, at least in the 41 states that have individual income taxes. Teleworkers generally exceed their home states’ withholding triggers after one month. In a few states workers are also subject to the “convenience of the employer rule,” which treats compensation earned remotely as if it was earned in the employer’s home state, creating opportunities for double taxation.

Some of the complexity is solved by tax reciprocity agreements between neighboring states, which permit workers to pay tax in the jurisdiction where they live. The agreements, however, are confined to roughly 15 states. Several major states, including California and New York, have rejected reciprocity with other states.

A second potential problem involves the presence of teleworkers in a new state, potentially triggering tax nexus. Many employers fear the arrival of mobile workers in new states will cause revenue departments in those jurisdictions to assess corporate income taxes, Jacobsohn said. A third problem is that telecommuters could disrupt the protections afforded by Public Law 86-272—a federal law that bars states from imposing income taxes on an outside business if its activities are limited to “mere solicitation of orders” for the sale of tangible personal property.

Only a few states have provided guidance to employers, said Eileen Sherr, director of tax policy and advocacy for the American Institute of CPAs.

“I keep hoping more states will do something, but they haven’t yet,” Sherr said. “It is definitely a hot issue. We’re working with Congress on this and we’re hoping it’s addressed in the next legislation.”

The solution that emerged in the Senate, S.3995, is a pandemic-specific version of a mobile workforce relief measure that Sen. John Thune (R-S.D.) has promoted for several years.

Key features include: a 30-day trigger before states are permitted to impose income taxes; the trigger is extended to 90 days during 2020; the presence of remote workers in a state during the pandemic is insufficient to create tax nexus; and professional athletes, entertainers, and other highly compensated figures aren’t covered.

The concept has received wide support from across the business community.

A coalition of trade groups including the U.S. Chamber of Commerce, National Association of Manufacturers, National Retail Federation, and the Silicon Valley Tax Directors Group endorsed the measure, telling congressional leaders, “a federal solution is needed because the states are taking different and conflicting positions on how the income of worker displaced by the pandemic should be taxed.” The Council on State Taxation, representing 550 multistate corporations, expressed similar views in a letter to congressional leaders.

With negotiations on virus relief at a deadlock in Congress, it isn’t apparent whether the workforce measure will advance on its own at some point or be wrapped into an umbrella bill if one develops.

Most state tax administrators, however, oppose any federal preemption, and Thune’s strategy has generated little enthusiasm in the House.

“This kind of breaks my heart because this is all about getting a preemption rule that the House has decided—for almost 15 years—it isn’t interested in advancing,” said Verenda Smith, deputy director of the Federation of Tax Administrators.

Smith rejected the view that state revenue agencies would seize on the pandemic and the tsunami of telecommuters as a basis for employee double taxation and nexus battles with multistate businesses. Most state revenue departments would embrace some type of waiver for telecommuters during the health emergency, but Smith said a federally required 30-day rule wouldn’t be acceptable.

At the same time, the MTC takes a dim view of federal preemption as a strategy for dealing with teleworking.