"Ghost" or "virtual" kitchens operating outside the public view for largely delivery-only are growing, and so are related tax implications.
Getty Images stock photo

The hottest innovation in dining, home-delivered meals prepared in mysterious kitchens shielded from public view, is gaining the attention of state revenue agencies as a potential magnet for tax controversies.

Known as “ghost” or “virtual kitchens,” these delivery-only businesses operating from non-restaurant locations or unused corners of poorly performing restaurants have surged in tandem with overall restaurant delivery services during the pandemic. The businesses, tagged with culinary names such as MrBeast Burger and Pasqually’s Pizza & Wings, are optimizing meal preparation and distribution, and winning the hearts and tummies of millions of consumers.

Ghost kitchens, however, also add a wrinkle to the collection of state and local taxes, tax practitioners say. Few, if any, states have provided guidance on their tax duties. And only half of the sales tax states have passed laws or issued regulations addressing the tax duties of food delivery services as DoorDash, Grubhub and Uber Eats—essential affiliates to any virtual kitchen.

“There are lots of implications for a business’s responsibilities for sales and local meal and restaurant taxes,” said Brian Kirkell, a state and local tax principal with the tax and accounting firm RSM US. “You may also have income tax duties in multiple jurisdictions depending on the business or customer location. Unfortunately, most states and localities haven’t provided full guidance on how these taxes apply to a ghost kitchen.”

Ghost operations are expected to take on increasing importance in the global food and drink industry over the next decade, according to Euromonitor International. The London-based market research firm predicts a $1 trillion global market for delivered meals from ghost kitchens by 2030. While some of the expansion will be organic, much of the growth will reflect a shift away from eat-in dining, drive-through and take-out dining, and purchases of prepackaged meals.

The growth of ghost kitchens will be aided by the app-based delivery services that have been helping to satisfy cravings for pizza, submarine sandwiches, and Szechuan chicken for more than a decade. The Covid-19 pandemic supercharged the trend, leading total sales of home-delivered meals in the U.S. to more than double from $23 billion in 2019 to $51 billion last year, according to an analysis by economists at Emory University’s Goizueta Business School.

The virtual kitchen model is getting traction with both small entrepreneurs and food industry goliaths.

Michelle Morgan launched a successful delivery-only Asian kitchen from a shuttered New York City restaurant after her job as a bar manager disappeared during the pandemic. Tiger Lily Kitchen, featuring vegan-based foods with meat options, proved so successful that she now plans to relaunch Tiger Lily in November as a full-service restaurant with extensive delivery options from a store front in Manhattan’s East Village.

“You can save a ton of money setting up a ghost kitchen, but if you don’t have a strong background in restaurants you’ll never get anywhere,” said Morgan, an 18-year food industry veteran. “You have to know your product, and your audience. You have to be very niche.”

On a larger scale, fast-food giant Wendy’s announced plans in August to open 700 ghost kitchens across the U.S., Canada and the U.K. Days earlier, the Kroger grocery chain announced it would deliver meals from some of its stores through a partnership with Kitchen United, a fast-growing provider of kitchen space and technology.

Ghost kitchens offer several operational and financial advantages over traditional restaurants according to CloudKitchen, a company founded by former Uber chief executive Travis Kalanick that is buying properties in dozens of cities to build out kitchens for lease.

CloudKitchen recently reported that the average restaurant requires $1 million in startup capital and 25 employees for a 2000-square-foot operation. Given those capital and operational constraints, the restaurant won’t return a profit for five years. By comparison, a well-run ghost operation can operate from a 300-square-foot space with four employees and capital costs of $30,000. That same ghost kitchen will break even after six months, Cloudkitchen says.

The first question involves the proper application of state and local sales taxes and any relevant meals taxes, Cram said, and the correct answer will often follow from an analysis of rules sourcing a transaction to a specific location.

“You can definitely get into some complicated situations where a delivery service is picking up an order at a ghost kitchen and delivering it to a customer in another town,” Cram said. “So the question is whether you tax at the rate for the ghost kitchen or the customer’s location. You could get a different answer depending on the sourcing rules for different states.”

Some food items are exempt from taxation depending on the jurisdiction, but many aren’t. Special taxes can apply to beverages, with some jurisdictions imposing taxes on sweetened beverages and alcohol. Finally, states and localities impose a wide range of tax rules on delivery charges and operational surcharges.

Who Collects the Tax?

Perhaps the most important question is who will collect and remit the tax to revenue officials. In many states the delivery company will collect the tax, but the ghost kitchen will be the tax collector in others, said Scott Peterson, vice president of U.S. tax policy at software company Avalara Inc.

Marketplace facilitator laws, enacted in all 45 of the sales tax states following the U.S. Supreme Court 2018 decision in South Dakota v. Wayfair offered clarity in some states, Peterson said. The laws generally specify that online marketplaces such as Amazon and Etsy are required to collect and remit sales tax to the state on behalf of out-of-state sellers using their platforms.

A dozen states, through statute or guidance, have brought food delivery services into their marketplace laws, leaving the tax collection duties with businesses such as DoorDash and Grubhub. But several states, including California and Florida, have specified that food delivery businesses aren’t marketplace facilitators. 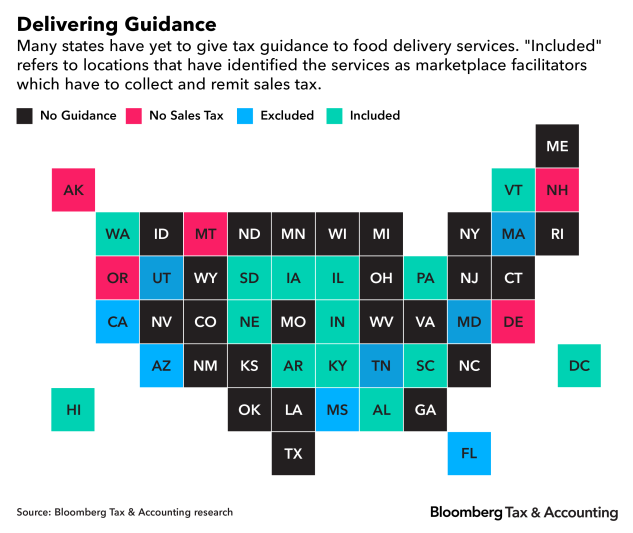 The issue is especially complicated in the more than 20 states that have failed to pass laws or issue regulations defining the duties of food delivery services, said Ulrik Boesen, a state tax policy analyst at the Tax Foundation.

“Can you require the marketplace facilitator to collect these taxes? That’s a question that hasn’t been answered by many of the states, and that may make the burden difficult for the delivery services,” Boesen said.

With dining paradigms shifting so quickly, RSM’s Kirkell said the states need to provide guidance to maximize their tax collections and minimize confusion for ghost kitchens and delivery companies.

“In the next year or two I would fully expect most of the large supermarkets to be doing this and the large fast-food chains,” Kirkell said. “And I fully expect the Grubhubs and the DoorDashes to essentially create their own virtual restaurants.”