A car on the line at GM's Orion plant in Michigan on March 22, 2019. The auto giant is expanding the plant with the help of a $1.8 billion incentive package from the state, which ranked 7th from the top in Good Jobs First's subsidy-transparency report.
Photographer: Jeff Kowalsky/Bloomberg

More than a third of state economic development agencies still hide details of the big-dollar deals they make to lure business investments, even though public disclosure of tax subsidy programs is improving in most jurisdictions.

Tax policy think tank Good Jobs First reported Tuesday that 62% of the 250 agencies administering business incentives disclose reasonable information about companies that receive state-sponsored tax benefits. Only 55% of agencies received a passing grade when the study was last conducted in 2014.

Ninety-six of the agencies, 38%, disclose very little information about the projects they support. None of the 96 disclosed the identities of businesses that had been awarded tax subsidies.

The study, called Financial Exposure: Rating the States on Economic Development Transparency, ranks states based on performance of the economic development agencies under their control. Scores between zero and 100 points were assigned to each state after an evaluation of program characteristics, including: quality of project information; advance notice and public participation; company information; subsidy information; jobs created and retained; wages and payroll; capital investment; and data accessibility. 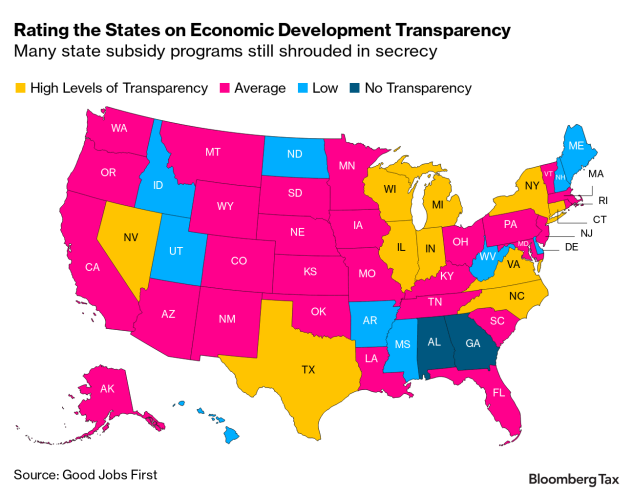 Alabama and Georgia each scored zero because they provide “no meaningful disclosure” about their economic development programs and the subsidies they distribute. Other states on the transparency naughty list included North Dakota, Maine, New Hampshire, Delaware, and Idaho. 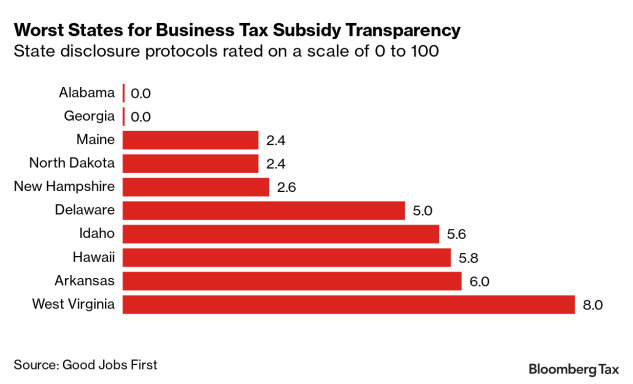 Alabama Secretary of Commerce Greg Canfield disputed the findings, saying his agency routinely shares information about its incentive deals to the state Legislature and the public, “contrary to claims by critics.” Canfield dismissed the report as the work of “union-dominated organizations” that “attack every aspect of the incentives process.” Good Jobs First said Alabama releases aggregate data about its tax incentives program, but fails to disclose specific information about the businesses receiving benefits and their performance after pocketing state subsidies.

The Georgia Department of Economic Development acknowledged the state’s “sunshine laws protect privacy for companies and protect Georgia’s offers from competitor states during the investment decision process.” But finalized development projects are required by law to be posted on the department’s website “within five business days,” an agency spokesperson said.

Those disclosures, however, aren’t useful because the department removes them from its website after 30 days, Good Jobs First said.

Nevada and Connecticut lead the transparency pack with scores of 64 and 52, respectively. Other states on the top-five list are Illinois, Virginia, and Indiana. 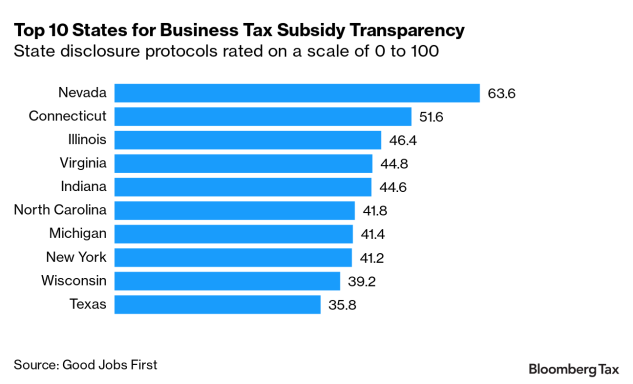 The report highlights Nevada’s performance, noting that the state finished in the bottom tier in the 2014 study. The state has made significant strides due in part to a 2015 law requiring the Nevada Office of Economic Development to release comprehensive data about the tax abatement program and the businesses receiving state support.

“This isn’t the 19th hole of a golf course,” said Michael Brown, executive director of the state’s Office of Economic Development. “We’re doing the public’s business. We’re a government agency and we should disclose this type of information. It’s as simple as that.”

Authors of the study said states overall have made some gains over the last 15 years, but in many jurisdictions useful information remains unavailable. Previous versions of the transparency report card were released in 2007, 2010, and 2014.

“Transparency has been growing—across the country and over time—and that’s a good thing. However, there is room for improvement,” said Kasia Tarczynska,study co-author and a research analyst at Good Jobs First. “The average score was 22 and the highest score was 62 out of 100. Only two states scored higher than 50.”

“We aren’t assuming that subsidies are uniformly bad,” Wen said. “But without transparency, a state could be losing a huge amount without knowing it.”

Good Jobs First called for states to create online portals that allow for public scrutiny of major initiatives. At a minimum, users should have access to the names of subsidy recipients, and the amounts offered for tax credits, cash grants, sales tax exemptions, and workforce development grants. In addition, portal users should be able to review recipients’ commitments regarding job creation, wages and investment, and any penalties imposed by the state in response to project shortfalls.

The report also emphasizes the need for comprehensive disclosure before subsidies are approved. States should post business applications and cost-benefit studies at least 60 days before a project is reviewed and approved, Good Jobs First recommended.