Not just NFL players have to pay a "jock tax" for games in other states. The burden can add up for some lower-paid NFL staffers.
Photographer: Cesar Rodriguez/Bloomberg via Getty Images

The financial spotlight is on multimillionaire professional athletes with the kickoff of the 100th National Football League season. But it’s the lower-paid, behind-the-scenes staffers who may face more of a personal tax headache.

NFL players and much of the staff who travel across state borders have to pay a “jock tax"—which allows the other states to take a small bite out of their salaries—in addition to federal and state income taxes.

“This is a significant burden that many overlook,” Sean Packard, tax director at Octagon Financial Services in Virginia, said. “And it’s not just millionaires facing the tax.”

Packard said that many individuals making only $50,000-$60,000 a year have to file tax returns in as many as eight jurisdictions a year—the number of away games in an NFL season. That could be both costly and time consuming for lower-level NFL employees, from assistant coaches to equipment personnel.

Ryan Losi, a financial adviser and executive vice president at PIASCIK, an accounting firm, gave a more conservative burden account, saying staff making under $100,000 can probably go without filing in every state, because of the small amounts of tax the states stand to reap.

“Anytime you are performing work or a service, a state will say Look down, and tell me what state you are in, and that’s where you owe taxes first!’” Losi said.

Furthermore, lower-salaried employees may also have to pay CPAs who specialize in multistate taxation to file their returns, and handle their small jock tax fees bills which, on average, would be less than $100. The cost of the CPA can run upwards of $1,500, according to Losi.

That isn’t an issue for multimillionaire pro players who already use a CPA for their tax returns or have it covered as part of their contracts, according to Losi. 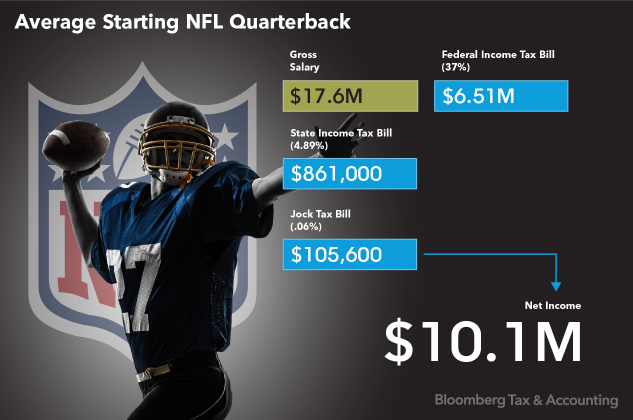 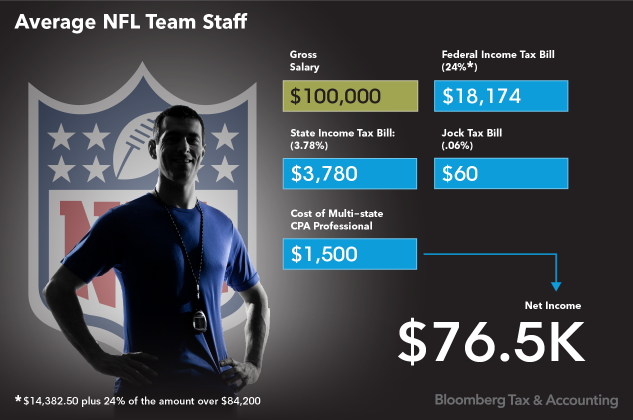 Jock taxes are based on the amount of time a player contributes to “income-related work” in any state that administers an income tax. The time is measured in “duty days.”

The tax is calculated by taking the amount of time a player spends in another state and dividing it by the total amount of income-related work days, which start at the beginning of training camp.

States with a sports franchise that don’t administer an income tax—Florida, Washington, Nevada, Tennessee, and Texas—don’t collect a jock tax. Players typically receive a tax credit from their home state on jock tax totals to avoid double taxation, and duty days accumulated during a league’s postseason count toward next season’s yearly total.

Athletes have contended with jock taxes for decades, but a more recent federal law has dealt another blow to their finances.

Another Blow to Athletes and Staff

Many athletes and lower-salaried staff are still adjusting to a personal income hit from the 2017 federal tax law, which reduced their ability to deduct business expenses on Form 2106, according to Matt Talcoff, a private client service partner at RSM US LLP.

The federal tax law’s $10,000 cap on deductions of property taxes, and state and local income tax has also had a significant impact on the salaries of athletes and team staff, he said. There was previously no limit on the amount of state and local taxes that could be deducted.