Retailers in 28 states get rebates for collecting and submitting sales taxes. Critics say the cost to states is too great and rebates are unnecessary in the age of automation.
Photographer: Luke Sharrett/Bloomberg via Getty Images

When states started levying sales taxes almost a century ago, some gave shopkeepers small rebates for manually collecting and submitting the money. Now those rebates cost states more than $1 billion a year, and critics say they make no sense in the age of automated tax systems.

Budget hawks in a handful of states are exploring options to either jettison or trim these “vendor discount” arrangements, which were intended to compensate sellers for serving as agents of state revenue departments. Illinois Gov. J.B. Pritzker (D) often refers to the programs as “corporate tax loopholes.” And Missouri’s state auditor, Nicole Galloway, worries that her state offers the most generous vendor discount in the country.

“Missouri’s discount gives the biggest benefits to the wealthiest retailers just for turning over sales tax paid by consumers,” Galloway said in a recent statement. “Ordinary citizens don’t get a discount for paying taxes on time.”

But vendor discounts won’t disappear without a fight in the 28 states that offer them, and some states even enriched their programs this year. In May Colorado bumped its rebate from 4% to 5.3% just for 2023, and Nebraska raised its rebate from 2.5% to 3%. Tennessee passed a law granting a rebate to sellers. The action responds to lobbying from both mom-and-pop sellers and retail giants such as Amazon.com Inc., Kroger Co., Target Corp., and Walmart Inc. that argue the programs remain relevant in an environment of increasing sales tax complexity.

“Keep in mind, sales taxes represent a third of total state revenues,” said Jason Brewer, senior executive vice president of the Retail Industry Leaders Association. “There are significant costs retailers shoulder for collecting and remitting those taxes, and the vendor compensation doesn’t reimburse all of it.” 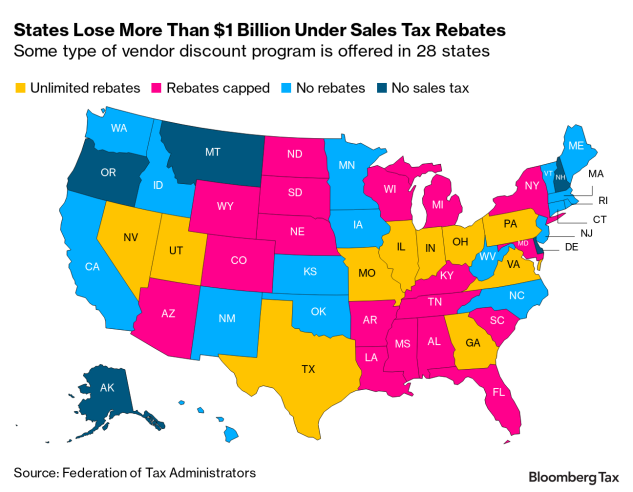 Vendor discounts, also described as “dealer collection allowances,” have their roots in the early years of state sales tax codes. In the 1930s some states encouraged compliance with their new systems by offering store owners a rebate to compensate them for manually recording sales tax collections and then remitting the taxes to revenue agencies.

While the programs differed, some states permitted retailers to keep up to 5% of the sales taxes they collected. A separate group of states declined to offer any form of compensation, viewing the tax collection duty as a small cost for the right to transact business in the state, said Phil Horwitz, a tax partner at Moss Adams LLP in Denver and a former director of tax policy at the Colorado Department of Revenue.

Over the last 90 years, the programs have expanded and contracted in response to state revenue crises, the whims of lawmakers, and lobbying by retailers, Horwitz said.

Of the 45 sales tax states, 27 offered some type of vendor discount at the beginning of 2022, according to an analysis by the Federation of Tax Administrators. That number jumped to 28 on July 1, when Tennessee began offering a discount limited to $25 per sales tax report. A handful of states offer unlimited rebates to retailers at different rates, but 18 states cap their programs in some fashion. 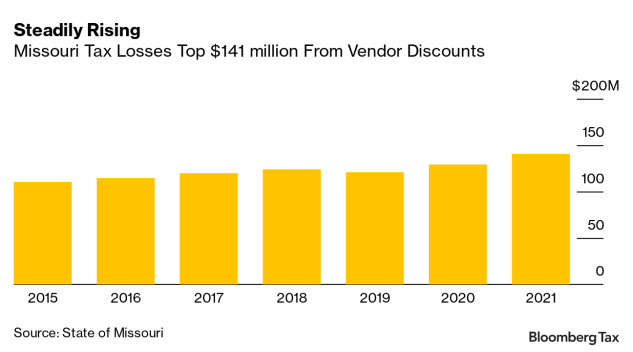 These tax expenditures by the states are difficult to track nationally, but a report by the think tank Good Jobs First put the price tag at $1 billion in 2008. The cost is likely higher today, said executive director Greg LeRoy, as the number of states offering discounts has grown and sales tax collections have climbed more than 50% over the last 14 years.

The tax losses are particularly acute in states offering unlimited rebates, including Illinois, Missouri, and Texas.

A spokeswoman for the Illinois Department of Revenue said the state’s 1.75% rebate resulted in a tax loss of $240 million last year. A report last month by the Office of the Missouri State Auditor pegged the loss at $141 million in 2021. Missouri offers an unlimited 2% rebate to all retailers. The Texas program, pegged at 0.5%, is projected to cost the state $292 million for fiscal year 2022, and $309 million for fiscal year 2023, a spokesman for Texas Comptroller Glenn Hegar said.

Tax expenditures of that magnitude are simply unnecessary because automated tax collection systems have dramatically reduced burdens and costs for retailers, some tax policy analysts contend.

“The vendor discount is an anachronism,” said Michael Mazerov, a state fiscal policy analyst at the Center on Budget and Policy Priorities. “I don’t think it’s justified given the level of computerization in retail businesses, the sophistication of point-of-sale systems, and the availability of third-party services that assist in these sales tax transactions.”

At a minimum, auditor Galloway argues, Missouri should adopt Arkansas’s program, which caps the rebate at $1,000 per month. This change alone would bring an additional $42.3 million into state coffers and $40.3 million into local coffers.

In Illinois, Pritzker proposed a similar cap to the discount in both his 2021 and 2022 budgets. The budget proposals were never enacted but would have generated an estimated $73 million for the state and $55 million to local units of government.

Brewer, at the retailers association, rejected the notion that sales tax compliance has gotten easier and less expensive over the last decade. If anything, he said, compliance has gotten more burdensome because each year brings new sales tax exemptions, temporary sales tax holidays, filing protocols, and obligations to collect local taxes across more than 11,000 city and county taxing jurisdictions. Technology is helpful in this climate, but it isn’t cheap, he said.

Retailers have also been forced to deal with new demands from the states following the US Supreme Court’s 2018 ruling in South Dakota v. Wayfair, which cleared the way for states to impose tax collection duties on remote retailers based on economic activity in a state rather than physical presence, a standard known as “economic nexus.” As a result, Brewer said retailers that once operated in a single state were suddenly required to collect taxes in dozens of new states and thousands of municipalities.

This fast-changing state and local sales tax environment caused retailers to lobby for more generous discounts during legislative sessions this year in Colorado, Minnesota, North Carolina, Nebraska, Oklahoma, and Tennessee. Most of the bills were unsuccessful, but they reflected a moment in time when states had extra revenue and could afford to compensate sellers for their duties, said Ryan Maness, a tax policy analyst with MultiState.

“All of that can be quite difficult, and vendor compensation is a way to ease some of those more onerous burdens,” said Maness, whose firm lobbies on behalf of retailers.

“State legislatures are very entrenched on this issue and will likely remain that way, so I’d be surprised if there is a lot of movement in either direction,” he said. “If a state has a retailer’s discount in place, it will be extremely difficult to get rid of it. If a state does not have a retailer’s discount in place, it will also be very difficult to enact one.”