Troubled clothier LuLaRoe Inc. is closing its Southern California warehouse after getting more than $1 million in sales-tax subsidies from the city of Corona to boost jobs and tax revenue.

The company notified state officials it is permanently laying off 167 workers on Dec. 20, about 2 1/2 years after entering into a 40-year agreement with Corona to open a warehouse and split the city’s share of sales tax paid by California customers on purchases of LuLaRoe products. The 2017 agreement projected the company would generate $2 million a year for the city, with half of that going back to the company.

Reality has been less rosy for the multi-level marketing company, which uses independent consultants to sell skirts, dresses, and leggings. The company is facing multiple lawsuits from suppliers and sellers, and Washington Attorney General Bob Ferguson (D) alleges in a January 2019 lawsuit that the company is an illegal pyramid scheme. In a statement to media at the time, a LuLaRoe spokesoman said the suit was without merit.

The warehouse will close 12 days before a new state law takes effect that requires more transparency about sales-tax sharing deals, including information about how cities plan to hold companies accountable if they fail to carry out the terms.

Although LuLaRoe is required to repay the previous year’s tax revenue payments if it breaches the agreement with Corona, it’s unclear if the city will pursue a refund or if the company will honor the requirement. Officials from Corona and LuLaRoe didn’t respond to request for comment.

Corona’s repayment requirement in its contract with LuLaRoe is unusual, whether or not the city ends up getting its money back, said Nathaniel Cline, an associate professor of economics at the University of Redlands, 30 miles northeast east of Corona. Cline studies tax incentives and their impact on the regional economy, with a focus on warehouses that have made the Inland Empire a hub for goods movement.

“A clawback provision is uncommon in the contracts that we see with warehousing and logistics,” he said. 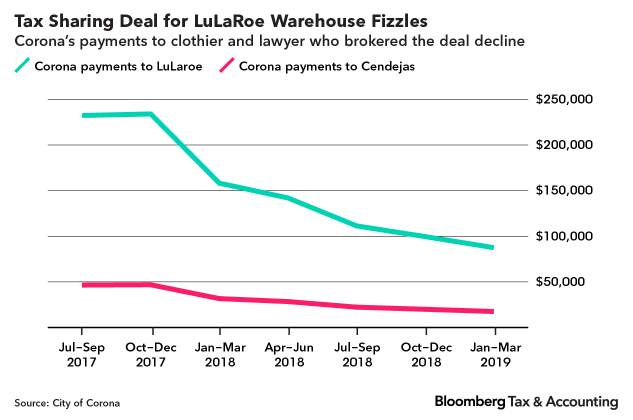 The Lure of Warehouses

Corona, 48 miles southeast of Los Angeles, is among a handful of cities Bloomberg Tax found in a recent investigation that use sales-tax sharing agreements to lure e-commerce warehouses and sales centers with the promise of creating jobs. Cities typically give half of their 1 percent increment of the state’s 7.25 percent statewide sales tax back to the companies, often for decades, in exchange for locating in their boundaries and designating those locations as the sole center for statewide sales, regardless of where customers are located.

City officials say the deals generate additional tax revenue and jobs, even though some of the money is going back to the companies.

Payment data the city provided to Bloomberg Tax and posted on its web site show LulaRoe’s deal was on track with the city’s projections at first but declined rapidly. Corona sent LuLaRoe $446,449 for July to December 2017, the first six months the agreement was in place. Payments have declined each quarter since, reaching a low of $87,485 for the first quarter of 2019. Corona has paid LuLaRoe $1.06 million through March 2019, the most recent period with available data.

Payments have declined as well for Robert E. Cendejas, a tax lawyer who brokered the deal and has a separate agreement to get 20% of the city’s share of tax revenue from LuLaRoe sales on top of what the company receives. His quarterly payments fell from $46,476 for the quarter of July to September of 2017 to $17,497 for January to March 2019. Total payments to Cendejas: $213,016.

Cendejas isn’t required to pay back what he’s received so far, but he won’t receive more payments and he is still obligated to advise the city on its LuLaRoe deal, according to his contract.

LuLaRoe could be obligated to repay another $1.8 million in tax credits it may have claimed from the state in 2017 and 2018 through a contract with the Governor’s Office of Business and Economic Development related to the same warehouse.

In its contract for the state-level California Competes income tax credit, the company agreed to invest $120 million in its Corona facility and employ 1,722 by 2021 in exchange for a total of $6.4 million in tax credits over five years. The company has until 2021 to meet its obligations, and the development office won’t say until then if it has breached the contract and must repay credits received, a spokeswoman said.