Shown is titanium alloy shrapnel from a Rolls Royce plant. NioCorp Developments Ltd. hopes to mine niobium, scandium and titanium at a Nebraska site.
Photographer: Andrew Harrer/Bloomberg via Getty Images

A long-shot Nebraska mining venture that scored $200 million in state tax credits is emerging as a prime example of a flawed business incentive program that critics say lacks transparency and is marred by conflicts of interest.

Critics of the Nebraska Advantage tax credit program are expressing misgivings about 10 years of tax abatements granted to NioCorp Developments Ltd., which hopes to mine niobium, scandium and titanium—rare elements crucial for the production of lighter, stronger and corrosion-resistant forms of alloy steel. Centennial, Colo.-based NioCorp announced the generous tax deal in October.

NioCorp executives have defended the $1.1 billion project, citing a feasibility study and noting it could eventually produce hundreds of permanent jobs in southeastern Nebraska. And state officials say projects like NioCorp’s are automatically approved if they meet requirements to qualify for tax credits.

But there are plenty of critics, even among pro-business Republican legislators.

Some of Friesen’s skepticism is linked to NioCorp’s tenuous prospects for success. In filings with the Securities and Exchange Commission the company stated it had not yet broken ground and the proposed mine “may not be commercially successful.” NioCorp, which trades on three exchanges as an over-the-counter security, also warned shareholders “you could lose all or part of your investment.”

The tax benefits granted to NioCorp—arguably the richest ever offered in state history—raise questions about the structure of Nebraska Advantage as the Legislature prepares to debate a measure, L.B. 720, extending the program for another 10 years.

Gov. Pete Ricketts (R) on Jan. 15 called on lawmakers to pass the extension bill, “so Nebraska can remain competitive nationally.” But Friesen and other lawmakers assert the state should focus on broad tax relief rather than incentives to individual businesses.

“Instead of state government picking winners and losers, let’s pick everyone to win by lowering our taxes,” said Sen. Steve Erdman (R), a frequent critic of Nebraska Advantage.

Meanwhile, London-based investment research company Hallgarten & Co. published a scathing report Jan. 16 that contends NioCorp doesn’t have the finances or the background to produce a viable rare-earth metals mine, declaring it a “triumph of marketing over content.” 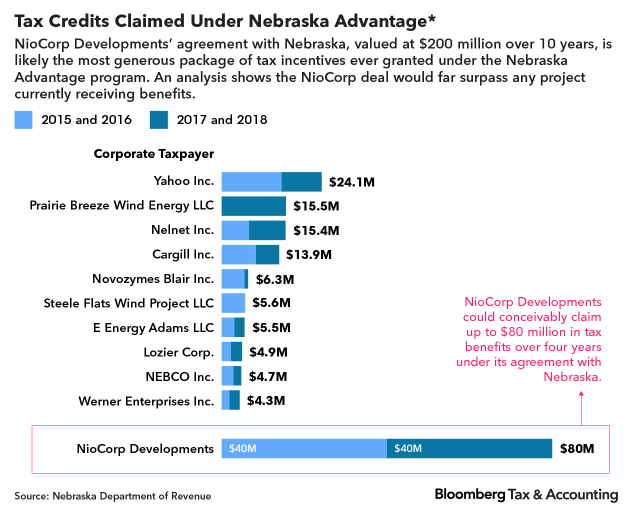 In addition, government watchdogs are bothered by the lack of transparency surrounding the NioCorp tax package. The Nebraska Department of Revenue, which has primary oversight for Nebraska Advantage, denied a public records request by Bloomberg Tax for all applications, final contracts and vetting documents pertaining to NioCorp. The documents are “not considered public records as they contain confidential tax information,” revenue department legal manager Michael Walsh wrote.

“There is no business climate justification for Nebraska’s odd and exceptional behavior in this case, and I have never heard of a state refusing to even verify the existence of a signed incentive contract,” said Greg LeRoy, executive director of Good Jobs First, a think tank that researches state tax credit programs. “That is facially outrageous, and frankly should alarm Nebraska taxpayers that something may be amiss about this deal.”

The transparency question is a particular concern because state revenue commissioner Tony Fulton and Sen. Mark Kolterman (R), who is pushing for renewal of Nebraska Advantage, are NioCorp shareholders. Fulton reportedly owned $1 million in NioCorp stock four years ago and served as a corporate director until 2016, when he was appointed revenue commissioner.

“There was no disclosure of how they met the criteria to get the incentives,” said Jack Gould, issues chairman for Common Cause Nebraska. “The public has a right to know.”

The revenue department said Fulton recused himself in all matters leading up to the $200 million NioCorp tax package.

NioCorp officials remain bullish on the mining proposal. In particular, they point to an extensive feasibility study supporting its objectives from last April. NioCorp called the study, “a critical milestone” that “further de-risks the project for project financing.”

Neal S. Shah, NioCorp’s chief financial officer, emphasized there would be no tax expenditures by the state unless the company makes good on its investment promises. He said Nebraska Advantage operates on a pay-for-performance model, which permits businesses to collect benefits only after investment and job-creation targets are reached. He added NioCorp’s benefits would remain viable regardless of the state Legislature’s decision with regard to L.B. 720.

“We already applied to the Nebraska Advantage Act and we have a 10-year attainment period,” Shah told Bloomberg Tax during the company’s annual meeting in November. “What the legislature chooses to do in the aggregate isn’t necessarily going to directly affect the company unless there is some sort of retroactive change.”

The NioCorp proposal, which hopes to develop the Elk Creek Superalloy Materials Project, is one of the most audacious mining ventures in the world. Nebraska is one of the few spots on the planet that could possibly host a viable niobium mine due to a large mineral deposit more than 500 feet below the surface in Johnson County.

The mining project could prove strategically important. Two years ago the White House designated niobium, scandium and titanium as “critical minerals” that should be developed and preserved as a matter of national policy.

Currently 88% of world production of niobium comes from a single mine in Brazil and another 10% comes from a Canadian mine, according to the U.S. Geological Survey. NioCorp could boost global production, planning to annually mine 7,220 tons of niobium, 95 tons of scandium and 11,642 tons of titanium from the Elk Creek region of Nebraska.

All that mining would have a significant impact on Nebraska, NioCorp chief executive officer Mark A. Smith said when the tax package was announced.

Elk Creek is projected to create 436 permanent jobs and 1,200 building and contract jobs during the three-year construction phase, Smith said. The mine would produce another 1,000 indirect jobs. With regard to capital expenditures, Smith said NioCorp intends to spend $1.14 billion during the initial development stage and $7.76 billion over three decades. He projected gross revenue of $20.8 billion during the 36-year lifespan of the project.

Despite these rosy predictions, NioCorp’s capacity to pull off a mining miracle is unclear. The company has incurred losses since it commenced mineral exploration in 2009 and desperately needs to raise hundreds of millions of dollars in start-up capital.

According to a Form 10-K filed with the SEC, NioCorp had only $400,000 in cash and a working capital deficit of $4.8 million as of June 30, 2019. The report points to an audit expressing “substantial doubt” NioCorp could “continue as a going concern.” As an “exploration stage company,” NioCorp warned its future is completely “dependent on our ability to raise capital to fund our future exploration and working capital requirements or our ability to profitably execute our business plan.”

NioCorp attributes the losses to a decade of necessary pre-production activities including test drilling and preliminary site development.

Geologists, however, say NioCorp is also up against a host of significant competitive challenges that make the Elk Creek mine speculative. The key question is whether the company can produce niobium at a price, volume and quality attractive to potential buyers.

“Most mining projects never end up as mines. It’s just the nature of the game,” said Richard Kettler, a professor or earth sciences at the University of Nebraska who has been monitoring the Elk Creek proposal for years. “You have to find something that is better than what else is available in the world at that time.”

The 2019 Mineral Commodity Summary by USGS raised questions about a new mine in Nebraska because, “world resources of niobium are more than adequate to supply projected needs.” USGS added that while the U.S. has niobium resources buried underground, most of it is “considered subeconomic at 2018 prices.”

Kettler said NioCorp’s success or failure would likely depend on its ability to mine scandium at a competitive price. While USGS pegs global supply and consumption of scandium at between 10 and 15 tons per year, NioCorp’s plan to produce 95 tons would significantly expand the global market for the rare metallic element.

‘Nowhere Else to Go’

Given these business risks and the unique features of the Elk Creek proposal, lawmakers such as Erdman and Friesen are asking why the state would grant NioCorp any tax credits, let alone $200 million over 10 years. And even if NioCorp never collects the tax benefits, the tax deal lends credibility to the project while developers are pitching deep-pocket investors. Such questions will no doubt be discussed later this month when the state Legislature considers L.B. 720, which would extend Nebraska Advantage through 2029.

“I’d be a little skeptical because niobium mines are not as footloose as manufacturing plants or software companies,” said Bartik, a senior economist at the W.E. Upjohn Institute. “So the question is, do they deserve any subsidy at all?”

Who Owns the Stock?

Common Cause’s Gould has been trying to monitor purchases of NioCorp stock by state officials since Nebraska public radio station NET aired a story in 2015 that found at least four members of the state legislature owned NioCorp stock.

One of those lawmakers, former Republican Sen. Al Davis, was subsequently fined $500 by the state’s Accountability and Disclosure Commission because he failed to properly report his position in NioCorp in a conflict of interest statement. The issue was important because Davis initially introduced and then withdrew a bill imposing a severance tax on niobium.

While the four lawmakers have left the Legislature, Gould remains concerned because current state senator Kolterman, who owns NioCorp stock according to a 2019 Statement of Financial Interest, is the primary sponsor of the tax credit renewal bill, L.B. 720. Kolterman did not respond to Bloomberg Tax’s request for comment on his position in NioCorp.

Gould also pointed to gaps in Nebraska’s financial disclosure requirements that cause lawmakers to report positions in brokerage companies such as Charles Schwab or TD Ameritrade rather than holdings in individual stocks.

“No one really knows how many other state officials might own NioCorp stock if they chose to report in that manner,” Gould said.

Fulton’s duties under Nebraska Advantage and his past relationship with NioCorp are also concerning, Gould said. Fulton told NET he owned 1.4 million shares in 2015. In subsequent filings with the state, Fulton disclosed his wife and children also hold NioCorp stock.

Fulton has declined to respond to media inquiries about NioCorp, pointing to a conflict of interest agreement. Under the September 2016 agreement, governor Ricketts appointed Department of Insurance director Bruce Ramge as a special deputy to review any matters pertaining to NioCorp. In line with that commitment, the revenue department said Fulton did not play a role in the tax benefits granted to NioCorp.

Revenue department lawyer Michael Walsh declined to discuss the agreement reached with NioCorp, but he noted Nebraska Advantage is not a discretionary program. Unlike states with commissions that review applications by businesses seeking tax benefits, Nebraska grants benefits to any business, including NioCorp, that can demonstrate it meets the minimum standards of the program.

(Updated with references to a feasibility study and analyst's report. )