Fans try to catch items thrown into the stands between innings on opening night for the Reading Fightin Phils against the Erie Seawolves, at First Energy Stadium in Reading, Pennsylvania, on May 4, 2021.
Photographer: Ben Hasty/MediaNews Group/Reading Eagle via Getty Images

Several minor league baseball teams are latching onto Covid-relief money in a “walk-on-the-legal-wild-side” effort to preserve their patch of America’s pastime.

As the big league playoffs take the spotlight, struggling minor league affiliates from Reading, Pennsylvania, to Hudson Valley, New York, are convincing local officials to use their American Rescue Plan funds to pay for new turf, brighter lights, and even stadium party decks.

“Spectator sports suffered most from Covid,” said Victor Matheson, a sports economics professor at Massachusetts-based College of the Holy Cross. “It’s totally reasonable for them to ask Congress for money when it’s bailed out local restaurants and music venues.”

But with Congress failing to act on a minor league-specific aid bill, it’s still unclear what strings are attached to the broader $350 billion in federal stimulus available to states and localities for pandemic recovery.

“Fixing up stadiums seems fairly far afield, as long-term stadium improvements have little to do with Covid,” said Matheson.

The confusion has put minor league teams and their host towns in a jam, left to await clarification from the federal government, or forge ahead and hope for the best while the clock ticks on overdue rent and a Major League Baseball mandate to upgrade stadiums or cease operations.

State of the Minors

In 2018, Congress removed federal minimum wage and overtime protections for the thousands of minor league players spread across the U.S., with MLB claiming it would otherwise be forced to eliminate some franchises. It has cut 40 minor league teams anyway, and the remaining clubs have undergone a realignment.

The 120 teams now comprising the minors have lost over $800 million since the onset of Covid-19, according to Greg Rosenbaum, owner of the Cincinnati Reds affiliate Dayton Dragons, who’s spearheading an effort to secure congressional relief for suffering teams.

Despite being almost wholly dependent on in-person customers, the minor leagues were forced to cancel the 2020 season (even as the big leagues found a way to squeeze in televised games), and play to restricted crowds this year.

Two-thirds of minor league clubs that lease their ballparks from local governments have been unable to cover rent, according to a survey.

Compounding the financial pressure, each minor league team must invest up to $3 million over the next decade to upgrade its stadium and training facilities or risk losing its professional development licenses, which means the big leagues would stop covering player payroll, according to Sportico, which reports on the business of sports.

“The realignment has created an additional economic burden on the teams that survived 2020,” said Rosenbaum, who also chairs Minor League Baseball’s government relations committee. “We’re all trying to figure out how to deal with that.”

When it comes to money, the minor leagues are almost a different sport from the majors.

Minor league players received a salary bump this year, raising income for the highest-paid, Triple-A players to $14,700 for their five-month season; and to $10,500 for Single-A players, according to the Sporting News.

A Bloomberg Tax analysis found that income from salaries this season for the nearly 3,500 players in the minor leagues combined was $41.8 million. The highest paid player in the majors, Los Angeles Angels center fielder Mike Trout, made $37.1 million. 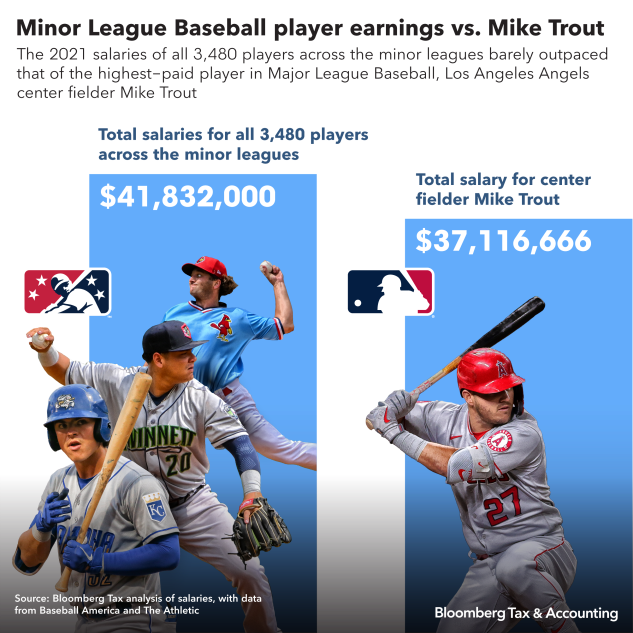 Because of the financial stress on minor leaguers, the Major Leagues announced Oct. 17 that it will begin paying for housing for the nearly 3,500 affiliated players next year.

Minor league teams took a combined $40 million in Paycheck Protection Program loans early in the pandemic to cover worker salaries. But unlike Broadway theaters and live music venues they’ve been shut out of additional government relief.

That’s why Dutchess County, New York, has allocated $12.5 million of its $57 million in American Rescue Plan funds to expand locker rooms, build an outfield party deck, and buy the land housing the stadium for the Hudson Valley Renegades, a New York Yankees affiliate, according to county officials.

But the decision is not without opposition.

“This is single-A baseball. To pretend it’s an economic driver is insane,” said Democrat Nick Page, a county legislator and self-described baseball fan who voted against giving the money to the Renegades in favor of using it for housing, broadband, and infrastructure projects. “This is not doing any good for the average person in Dutchess County who has suffered during Covid.”

But without the investment the county, which owns the stadium and collects rent from the Renegades, wouldn’t have a paying tenant, said County Executive Marc Molinaro. Dutchess County expects a $16 million return in increased tourism, sales, and hotel tax revenue from the agreement, which secures the Renegades as a Yankee team for 25 more years, he said.

But the owner of Red Pepper Diner near the stadium has a different take.

“Nobody gets business from the stadium,” said Saman Munaweera. “People come in, they park there, and they leave.”

In Berks County, Pennsylvania, lawmakers agreed to use Covid funds for a new locker room and weight room for the Reading Fightin Phils, a Philadelphia Phillies affiliate. It’s one of the county’s only ARPA expenditures so far.

“Major League Baseball needs us to expand our stadium and improve our facilities or we lose our team, and I don’t think that’s a threat. That’s very real,” said Kevin Barnhardt, a Berks County commissioner.

The county is expected to split $15 million in renovations for the Fightin Phils’ FirstEnergy Stadium with Reading and the state, but is waiting on final Treasury guidance and for Congress to appropriate infrastructure funding before it spends the rest of its $81.6 million from the American Rescue Plan, according to Barnhardt.

The U.S. Treasury has said it will recoup any funds used on “ineligible” expenses, and is already fighting a dozen states in court over a provision barring use of Covid-relief funds to offset state tax cuts. It’s instructed recipients to follow an outline of Covid-related economic priorities while they await final guidance. Local and state officials have submitted more than 1,500 inquiries on eligible uses, asking if things like debt repayment and investments in high school sports facilities are allowed.

“For places that want to get very creative with the money, they need to document how those uses comply with the spirit of the funding, or it could be deemed unacceptable,” said Vicki Hellenbrand, a CPA and managing partner at Baker Tilly, who heads the firm’s public sector practice, which advises over 3,000 government entities on American Rescue Plan spending.

“We’re advising those clients to look at other government funding that might be available under specific programs because a lot of focus on this funding is really for the pandemic itself.”

Between large cities and counties required by Treasury to report ARPA spending, only 18.1% of funds have been committed so far, according to data from the Brookings Metropolitan Policy Program. The funds must be allocated before 2025 and spent before 2027.

“States and localities have been conservative with spending their money so far,” said Chris Moran, a tax lawyer at Venable LLP in Baltimore. “But with everything these teams have gone through over the past year they probably need this money sooner rather than later.”

Phil Raccuglia, who owns Pizza Como, a short drive from FirstEnergy Stadium, says it would be “surreal” if the Fightin Phils left Reading, a city of about 90,000 in southern Pennsylvania.

“Especially before Covid, we would get a lot of business before the games,” he said. “They packed that place before everything went down. It brought people out. It was more than just baseball. I couldn’t imagine what people would do during our summers. You’re talking about nine, ten-thousand people coming in.”

In the northeast part of the state, Lackawanna County has agreed to cover half the overdue rent and defer half of rent going forward for the Scranton/Wilkes-Barre Railriders—about $1.76 million in total, according to stadium authority solicitor Frank Tunis. The Triple-A club, owned and operated by the New York Yankees, has fallen more than 18 months behind on rent.

The August agreement states the county “will use its best efforts” to determine if it can replenish the stadium’s rent fund with ARPA money, according to Tunis. Brian Jeffers, the county chief of staff , did not return multiple requests for comment.

“Spending the money on baseball stadiums is a walk on the legal wild side,” said Joe Bishop-Henchman, vice president of tax policy and litigation at the National Taxpayers Union Foundation. “I’m not sure which bucket this would fall under unless they’re fixing the sewers in the stadium. Time will tell how vigilant Treasury wants to be, but we’ve already seen them actively fight six lawsuits over restrictions.”

In Wisconsin, the state has made $2.8 million available for minor league sports teams, including the state’s three minor league baseball teams, to apply for as part of its American Rescue Plan-funded Covid-19 grant program for tourism and entertainment venues. The program is intended to replace only lost revenue, said Tatyana Warrick, a spokeswoman with the Wisconsin Department of Administration.

Minor leagues have been pushing Congress to back a similar grant program for all of its teams. A pair of bills (H.R. 4150/S. 2233) that would send up to $550 million to teams have been “tied up with other small business priorities” and need “more bipartisan support,” said Sen. Mark Warner (D-Va.), one of 10 bill sponsors.

Warner said teams should find “any relief they can,” including money from the American Rescue Plan, if Congress can’t deliver. Treasury did not respond to inquiries on whether the allocations in Dutchess, Berks, and Lackawanna counties would be subject to clawback.

“Baseball is the American pastime,” Moran said. “As a practical matter I don’t really see Treasury coming and stopping this.”